Jeremy Parish declared 2019 The Year of Virtual Boy, and to kick it off Benj Edwards of vintagecomputing.com revealed the Virtual Boy dual arcade stick that he will be selling, the BX250. The dual stick is designed with buttons in several arrangements suitable to all VB games including the rare Street Fighter Homebrew.

Benj currently offers arcade sticks for Super Nintendo, NES, and other consoles & computers, all built around standardized enclosures to save costs, and with custom electronics to avoid adding additional input latency via converters. His sticks use all Sanwa real arcade hardware (JLF sticks and 30mm Sanwa face buttons) and come in a variety of color schemes that usually pay tribute to their host system.

Disclaimer: I won a BX-110 in an ad-designing Twitter competition with this totally radical submission: 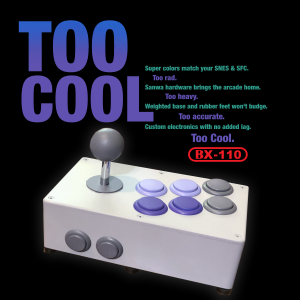 It’s designed for use with the unofficial Street Fighter II port called Hyper Fighting. Custom PCB inside — DM me know if you want one#bxfoundry pic.twitter.com/PA148IbMfu