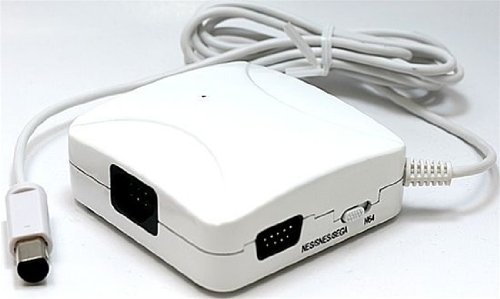 This is a review of an adapter manufactured by Gtron that allows you to use your original console controllers on your Wii’s GameCube port. When I wrote this review it was one of the only retro adapters available.  This review and the adapter are all far outdated, however this review was the catalyst to starting what became this website, RetroRGB.  You can check the main Wii Retro Adapter page for some much better, less-laggy solutions, however I’d always like to keep this page up, just as a reminder of how this all started 🙂 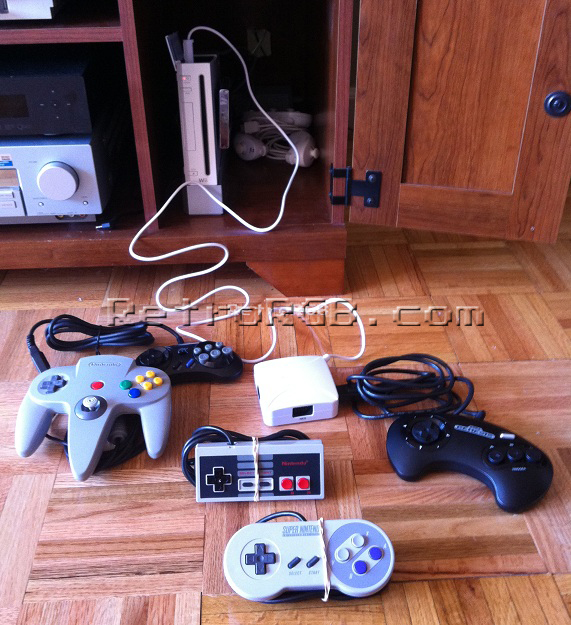 NES, SNES and Genesis (with the 3-button controller) worked great.  No configuration, no setup, just literally plug and play.  All of the buttons on each of the systems were automatically mapped out perfectly and it was exactly like I was playing it on the original console!  I can’t stress this enough:  No setup at all, it just worked!!!

The first problem I ran into was with the N64 controller.  The adapter has a toggle switch, so I tried different combinations to make sure I wasn’t doing anything wrong.  I tried plugging it in with the Wii off and the adapter in the N64 position before powering on.  I also tried starting it with the switch in the other mode and then moving it to the N64 position after booting.  No matter what I tried, some of the buttons on the N64 controller would work some of the time and the analog stick almost never worked.  I tried two different controllers and I also tested them on an original N64 system to double check that they were both in good working order.  It seems that N64 controllers just plain don’t work.  Other reviews online have had different problems with the N64 controllers, but all agree it’s unusable. 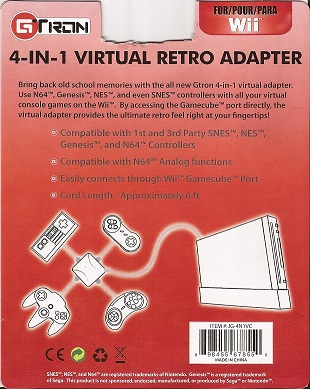 After I was done testing each controller with the Virtual Console games, I tried each one with it’s corresponding emulator (my Wii is modded, of course).  For NES, SNES and Genesis (3-button controller), it was literally plug and play, just like the Virtual Console games.  The controllers worked flawlessly with their corresponding emulators and no setup was needed.  The only “config” that had to be done was on the Genesis emulator, but all I had to do was tell it I was using a Gamecube controller instead of the Wiimote.  It was only one quick setup option though and still no button mapping required…although here’s a tip to anyone using the Genesis emulator: Set up the Wiimote as “Controller 2”, so you can still use the Wiimote for savestates and emulator control.  Unfortunately, the 6-button controller also didn’t work with the emulator, even after making sure to select the 6-button controller in the emulator setup.

FYI, I didn’t bother trying the N64 controller with an emulator, because I’ve never found a N64 emulator that worked well on the Wii.

Anyone who has ever modded the original Xbox and added emulators knows exactly how long that process could have taken…I was expecting to spend forever setting up button mappings and saving configurations, but no!!!! NES, SNES and Genesis (3-button) worked fine!

Another thing to note is that since the adapter has a cable that’s about 6 feet long, it acts as an extension cord as well.  This is a big help for people like me that have gotten used to wireless controllers and forgot how short the cables of the older game systems were (I remember we used to drag the consoles out to the center of our living room when we played, so the controller cord could reach the couch)  The length of the adapter’s cable allowed me to leave my Wii where it was under my TV and sit on my couch, with enough slack on the original controller to be completely comfortable.

There is one other downside of the adapter.  Since it plugs into the Gamecube port, it can only support games that allow being played by the Gamecube controller.  Virtual Console games are compatible with the Gamecube port, but most WiiWare games are not…a total bummer.  I was hoping to play Sonic 4, Mega Man 9 & 10 and A Cave Story, all with the original NES or Genesis controllers, but no such luck.

My conclusion:  I was able to play all the way through Sonic and Knuckles with the Genesis controller and played all the way through Zelda: A Link To The Past with the SNES controller.  Both worked great and while every once in awhile I noticed some button lag, it’s not bad enough for casual gamers to notice (although I imagine hardcore gamers would definitely notice).

Unfortunately, if you require N64, 6-button Genesis, or WiiWare support (or want an adapter without much lag), check out the other options on the main Wii Retro Adapter page.