This page showcases the LCD screen replacement made by McWill, as well as compares it to the original Game Gear screens: 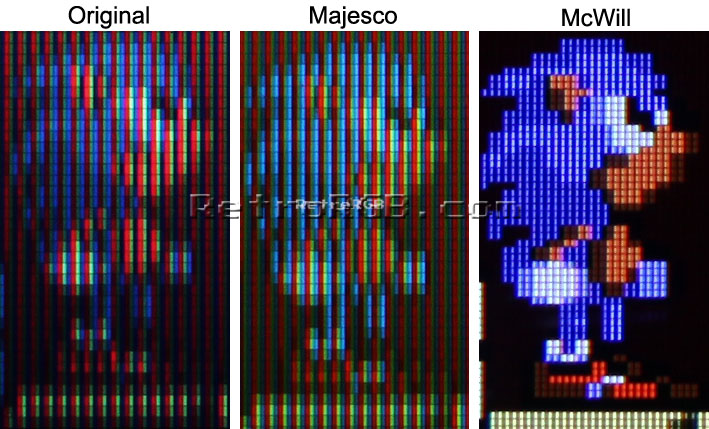 It’s my personal opinion that the Game Gear’s screen has not aged well. Unlike the Game Boy systems, there was only one revision of the Game Gear made by Majesco, which didn’t offer much improvement. Some people have modded the GG’s backlight with a newer one which saved battery life, but it didn’t improve the overall picture enough to make a drastic difference. Other people had even installed newer LCD screens into their Game Gear’s, but you’d either be forced to play them in half-screen, or stretched. Luckily, McWill, creator of the excellent Atari Lynx mods has also created a kit for the Game Gear, marking the first time someone’s truly been able to improve the Game Gear’s portable experience.  His LCD kit offers scaling effects and scanlines without creating any lag, all while having the pixels stay in their right positions. This is because the pixels are captured digitally into ram, instead of being an analog conversion.

Let’s first take a look at how McWill’s screen compares to the original and Majesco Game Gear screens. Keep in mind that while people claim the Majesco screen’s are generally slightly better quality, the condition of the Game Gear makes the biggest difference. While my Majesco GG is in excellent condition, it’s unmodified and my original Game Gear has had a full capacitor replacement. I can still see slightly more detail in the Majesco screen, however if both had brand new capacitors, it would be a bit more noticeable. More importantly though, even a perfect condition Majesco screen pales in comparison to the replacement LCD (click for full-sized):

The LCD screen mod has seven different modes that can be scrolled through by holding buttons 1, 2 and Start at the same time.  Here’s a description of each:

2 – Scaled Resolution with Scanlines:  This mode ads vertical scanlines, emulating the look of the original screen.  It’s very hard to capture in pictures, but in person I really enjoyed the effect it created.

4 – Doubled Horizontal Resolution, Scaled Vertical resolution with Scanlines:  This is the same mode as above, with scanlines added.

5 –  Doubled GG Resolution (upper and lower parts are cut off):  The Game Gear’s resolution is doubled to 320×288, but only 240 of the 288 vertical pixels are displayed.  This allows for no stretching, but with the top and bottom of the image cut off.  In some games this doesn’t really make any difference at all.

6 –  Doubled GG Resolution with Scanlines:  This is the same mode as above, with scanlines added.

Here are screenshots of each mode, listed in the order described above.  It’s very hard taking pictures of LCD screens, but I did my best.  Keep in mind that it actually looks much better in person:

Master System on Game Gear:
Unlike when using the original screen, SMS games on a Game Gear with a screen replacement look great!  Also, McWill added the same scaling options as for Game Gear games:  They can either be played in their original resolution of 256×192 to preserve the aspect ratio, or that resolution can be stretched to 320×192 to fill the screen horizontally.  Both modes also offer vertical scanlines, which I think is a great effect:  It still feels like you’re playing an SMS game on a Game Gear…but you can actually see what’s on the screen!  Click below for a full-sized pic: 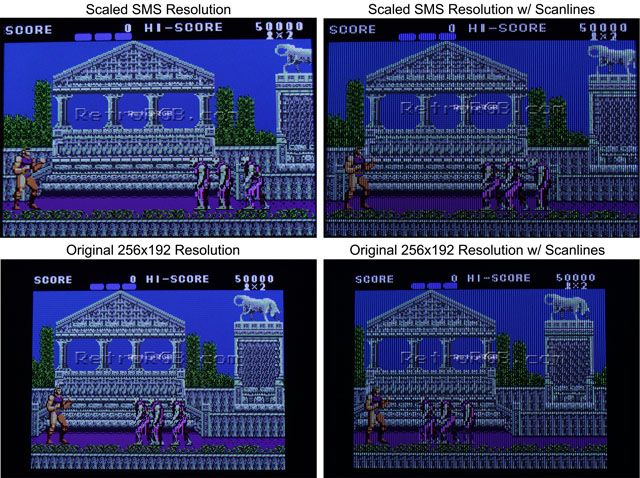 Summary:
In a perfect world, we’d be able to find modern LCD’s that match the exact size, resolution, refresh rate and aspect ratio of the original handhelds. Since that’s impossible to find, McWill has done the next best thing by digitally scaling the original Game Gear video signal onto a newer, high-quality screen. While it doesn’t exactly match the look of the original Game Gear, I find the second mode “Scaled Resolution with Scanlines” to be great for most games.  Some games such as Fantasy Star have weird vertical effects in that mode, so for those games I just switched to doubled mode and it looked fine.

As a kid, I owned a Game Gear and while I really loved it, I was always annoyed and distracted by the terrible look of the screen;  Even back then I felt it took away from the gameplay.  I can honestly say that playing Mega Man on my Game Gear with McWill’s LCD screen absolutely blew me away and it was like experiencing the Game Gear again for the first time.  Unfortunately, the kit is extremely expensive, but truly worth it for any serious Game Gear fan.

McWill’s website is currently being finished, but if you’re interested in this mod, you can reach him on the Atari Age forum, or email him directly:  order-lynx-lcd@online.de

I suggest checking out the Game Gear TV-Out page for details on McWill’s VGA / RGB out mod, otherwise please head back to the main Game Gear page for more information.