Skip to content
The iCade arcade cabinet from Ion Audio: 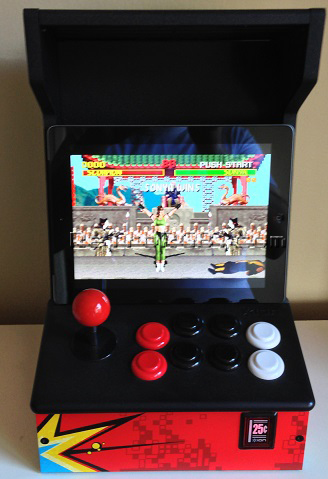 This is my favorite of all my mobile gaming accessories…but I’ll admit, when this first came out, I mocked it.  I thought: “it’s a mini arcade machine that sells for $100 and requires a $500 tablet, who would buy that!?!?”  Well, lots of things have changed since the day it was released:
First, you can get an iCade very cheap if you look in the right place (check the links to the right –>).  Second, tablets…even iPad’s (used ones, at least) have come way down in price.  The thought of spending less than $200 for an iPad 1 or 2 and an iCade actually sounds like a great idea. It’s a lot cheaper and easier than buying a full Mame machine.
Second, I love this thing for the exact reason I first mocked it:  It’s a friggin mini arcade machine!  I’ve enjoyed playing many of the classic arcade games via iMame and my iCade!
As result of the way the iCade mappings work (which I explain in detail in the main iCade section), there is an occasional button lag or glitch. I’ll say this though: I played through many Arcade, NES and other games with my iCade, and the lag never ruined the experience. If I had spent $1000 on a full-sized mame-machine, I might be upset, but for a cheap device, it’s excusable.
One thing I’ll note is the buttons and stick feel like actual arcade controls, not cheap plastic reproductions! Pretty cool for a cheap device like this!
I would definitely recommend it both as a novelty toy and as a fun little gaming device…especially for people who don’t have room for a full-sized arcade cabinet! They also have a second version out called the “iCade Core“. It’s not nearly as much of a novelty device, but it might fit yoru needs better: 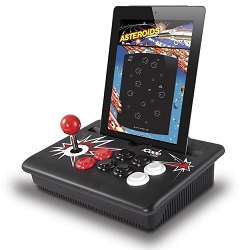 Please feel free to go back to the main iCade hardware page to see more iCade-compatible controllers.  Also, check out the main iOS / Android page for more info on games and software!