All versions of the TG-16 / PC Engine can output RGB, some with an adapter and others with an internal modification. 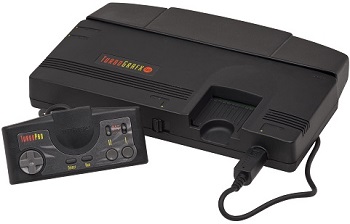 db-Electronics grafx booster:  db Electronics now offers a product that attaches to the “Turbo Booster” port in the rear of the unit, allowing for RGB output via a Genesis 2 RGB Cable (but MAKE SURE the cable includes the correct components!!!), as well as stereo audio, composite and S-Video. This is the solution I recommend for all TG-16 / PCE consoles that don’t use any other peripherals on the rear expansion port:  https://bit.ly/grafxbooster

fidde_se’s RGB Cable: There’s also an eBay seller that makes a more basic RGB solution; A standard SCART connector on one end and a connection into the back of the TG-16 on the other.  As an FYI, I’ve never personally tested this solution: fidde_se’s RGB Cable

SSDS3:
This is a solution that allows RGB output, as well as HUCard and CD rom/iso support!  Earlier versions of the SSDS3 have audio and video issues that can be fixed, however all versions shipping for more than a year have been good quality.

The Turbo Duo and PC Engine Duo consoles don’t have a rear expansion port, so the only way to get an RGB output is with a modification.  You can do this mod yourself, or have a modding service do it for you.  Alternatively, you can buy a pre-modded Duo, but MAKE SURE it’s a reputable seller!!!  I’ve received many emails from people who purchased pre-modded Duo’s that work poorly, or not at all!!!

Voultar’s THS7374-based board  This is a great TG-16 / PCE amp that sends RGBs through the high-quality THS7374 amplifier that’s had the filter turned off for the sharpest possible output.  It also has a built-in sync stripper and options for TTL and 75ohm csync.

AV Driver: Tim Worthington (creator of the NES, N64 and 2600 RGB mods) designed this amp with the PC Engine in mind. It can be installed in any version of the console and amplifies both video and audio.

Capacitors:
Almost all of the “Duo” consoles suffer from failing capacitors. It’s strongly recommended that you do a full cap replacement on all Duo consoles, as even if it’s still working, leaking caps could be slowly damaging your motherboard!  Unless you’ve done something like this before, I strongly recommend having one of the above modding services do it for you, as it’s easy to damage your console.  Jason from Game-Tech has a video that shows a cool trick to make the cap replacement easier: http://youtu.be/xIIvEluVelU

Jailbars:
Almost all TG-16 / PC Engine systems suffer from “jailbars”; Vertical lines of interference running down the screen.  After much testing, Tim Worthington found what might be the “final’ solution.  People are currently testing, but it looks like this is the best solution for all models (you can ask the above modders to try this as well):  http://etim.net.au/av-driver/pcebars/

SuperGrafx Warning:
The SuperGrafx has a design flaw that left unattended could result in damage to the motherboard, in a place where it could potential sever multiple traces in the same section.  To prevent this from happening, simply cut a piece of plastic on the inside of the case (click for full-sized): 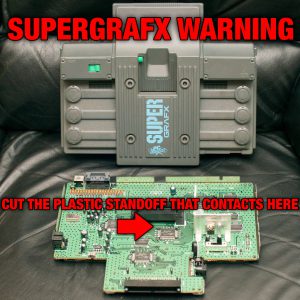 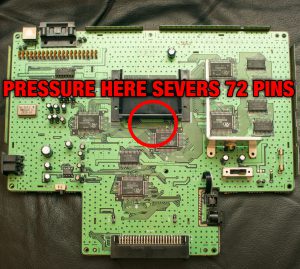 There’s no “right” way to experience these awesome consoles, however there is a wrong way:  Neglect.  If you own these original consoles, definitely check the capacitors on yours to make sure they’re not leaking!  While you have it open, you might consider doing the jailbar fix as well;  It’s less of a “mod” and more like “correcting a factory error”.  And of course, check your SuperGrafx as well for motherboard damage from that plastic piece.