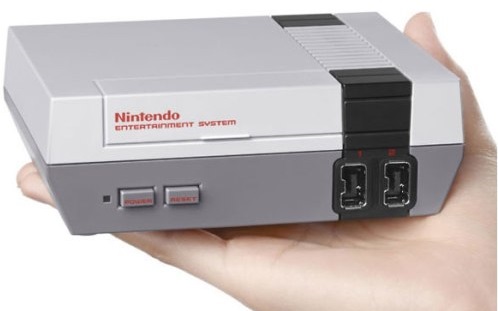 This is a review of the NES Classic console released in 2016. It only outputs 720p HDMI video and has limited options, but it’s 30 games and retail price of $60 might make it a great choice for the casual retro-gamer. A full list of games, as well as other info can be found on the Wikipedia page. Since there are so many other reviews being released, this review will concentrate on things other serious retro gamers would be interested in.

Video Review:
Here’s a video review of the NES Classic, it’s features and how it works.  It covers everything except the picture comparisons found below:

The outer casing is a direct throwback to the original front-loading Nintendo console, but much smaller. In fact, the NES Classic is only about the width of the NES controller itself! 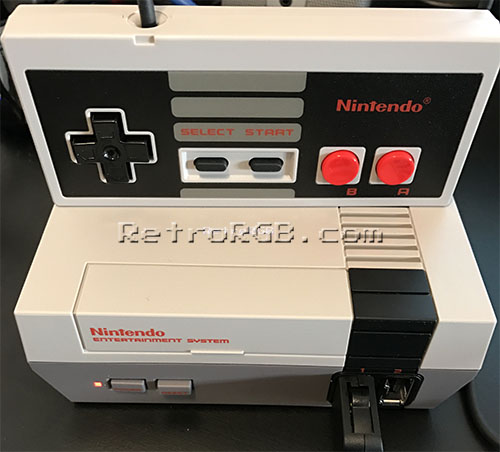 The front of the NES Classic has Power and Reset buttons, as well as two controller inputs. The cartridge door does not open:

The rear is equally as simple with just a USB-style charging port and an HDMI port. It’s a bit odd that the HDMI port is upside down. but that’s just an aesthetic.

The internals are a small circuit board, with an aluminum heat sink:

Here’s a closeup of the top of the motherboard (click for full-sized): 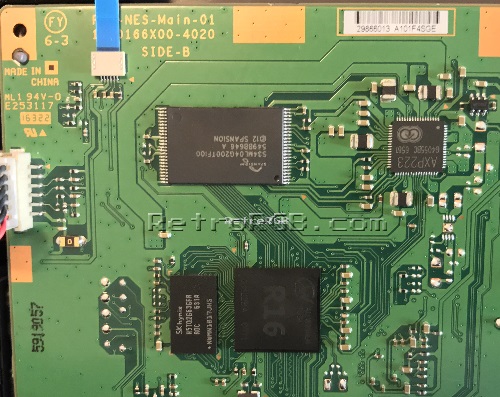 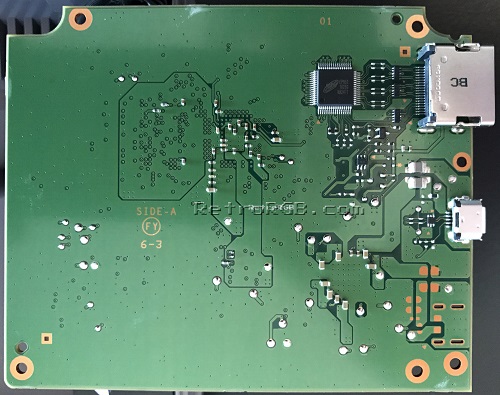 Menu & Features:
There isn’t much to show about the menu’s and the video options are a bit disappointing, but I’ll show what there is to offer:

Main Screen:
The main screen shows a picture of the original game box and can be sorted by name, release date, developer and recently played. Pressing reset on the front of the console will bring you back to this menu at any time and will allow you to create a save state. Save states are managed by hitting the down arrow and choosing your slot: 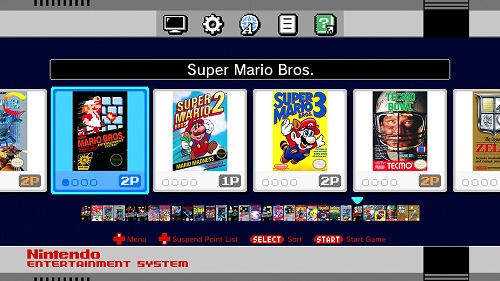 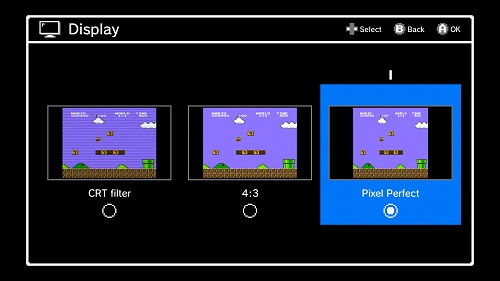 Here’s a close-up of the blurring effect of the CRT filter. More screenshots and a full-sized image can be found below.

Languages:
Here’s all the languages the menu supports: 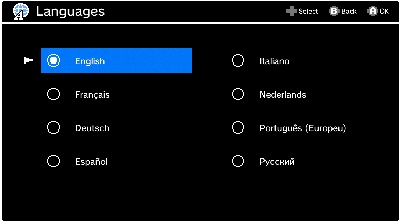 Legal:
I’m not even sure why they put this here, but they wasted an “options” page on legal notices: 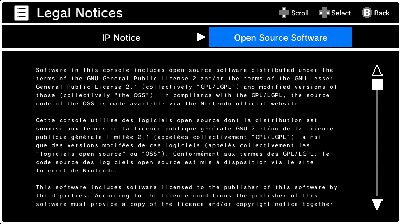 Manuals:
The “manuals” button is just a notice telling you to go to their website to get the manuals.  While I agree that’s a better way to view them, what happens a few years from now when they take that webpage down?  It would have been nice to have them saved on this device, just as an archive: 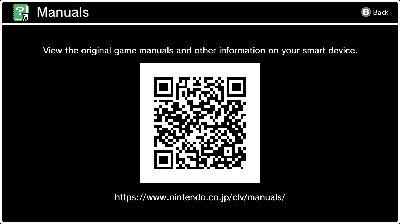 I’ll show the few modes the NES Class supports, but I also thought a great comparison would be between the NES Classic and the AVS by RetroUSB, as they’re both 720p-outputting, modern ways to play original NES games on newer TV’s.  I took basic screenshots to show the differences.  Click on each for full-sized views:

NES Classic vs AVS:
The AVS was using the “unsaturated v6” palette and was set as close to 4:3 as possible (two from the left in the AVS’ aspect ratio menu).  The screenshot below was zoomed 400% in size, but if you zoom all the way into the full-sized picture, you’ll see the background isn’t a solid blue color!  It’s strange and a bit pixelated.  I have no idea why they’d want to do this, as it causes a distinct loss in sharpness: 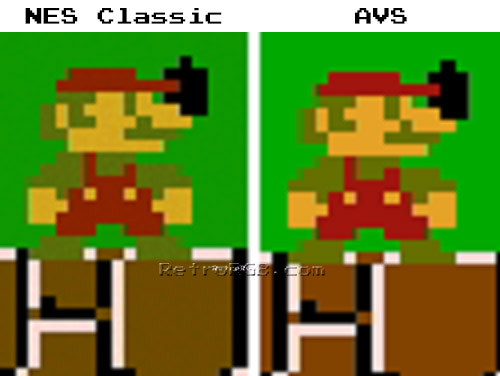 NES Classic CRT Filter vs AVS Scanlines:
In the screenshot below, the AVS has the scanlines set to 50%, however in the full-sized view, you can see comparisons to the AVS with 100% scanlines as well.  The NES Classic’s CRT filter makes the game look like it’s being played via composite or RF on an old, crappy CRT.  If that’s what you’re going for, you’ll be pleased, but it’s certainly not appealing to anyone who uses their consoles with an RGB monitor such as a Sony BVM or PVM (or who uses an upscaler):

The NES Classic is a niche product targeted to the casual retro-gamer and to people that just want a bit of nostalgia.  I think the person that’s most suited to use it would be someone who doesn’t already own a Wii U and wants to play the games included in the console.  If you do already own a Wii U, it’s just a matter of cost:  Will the $60 the NES Classic costs be cheaper then buying the games you’d like to buy from the Wii U Virtual Console?

That being said, this is not a product most retro gamers would use.  The lack of 1080p support and no options like 5x scaling are extremely disappointing.  Also, it’s output isn’t as sharp as the AVS or the Hi-Def NES and it’s lack of options is disappointing.  Also, there was definitely some lag detected when using it;  It wasn’t bad and certainly much better then the Retron 5, but any hardcore gamer will notice right away.

The console sold out everywhere on launch day and to be honest, I’m really wondering what people are thinking when they play it. I imagine if you haven’t played any of these games since their original release, you’ll love the NES Classic and won’t notice any of it’s flaws. That being said, if you’re on this website, you expect the best from your games and the NES Classic isn’t for you.

If you’d like even more info, plus some amazing side-by-side comparisons, I strongly recommend you check out My Life In Gaming’s full review of the NES Classic as well: