Getting the best quality output from a GameCube can be complicated, depending on your display.  This page touches upon all of those options, but most utilize the GameCube’s digital-out port.  A note:  Toward the end of the GameCube’s life, Nintendo stopped producing consoles with the digital-out port, presumably to save money, so if you plan on using a “GCVideo” solution, make sure your console has this: 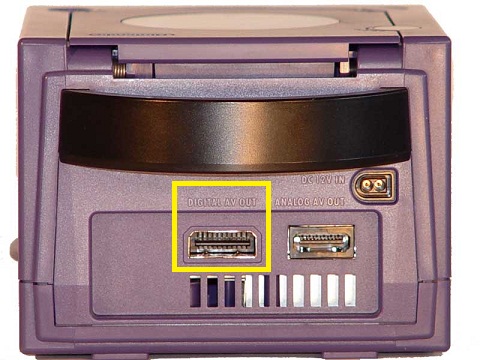 HDMI Displays
If you’re looking to play GameCube games on your HDTV, you can buy a solution based on an open-source homebrew project called “GCVideo”.  Some of these can be installed internally, but there are a few good plug-and-play options avaialble that support all resolutions.  Also, GCVideo 480i output has an option to “bob deinterlace” to 480p.  The result of that type of deinterlacing is a tiny bit flickery, but ads zero lag.  This is extremely important, as the Time Sleuth has proved that most TV’s are significantly laggier when used with 480i signals, even in game mode!!

*As a note, buying a Prism or Carby and a cheap HDMI to Component converter will get you the same quality output as the much more expensive MK-II.  You can even use dual output if you add an HDMI splitter.  The MK-II is certainly easier overall though.  Links to cheap DAC’s:  https://www.amazon.com/shop/retrorgb?listId=IP72N6BL06SV

480p-Compatible Analog Displays or Processors
If you’re using a CRT or processor that supports 480p via component video or RGB, you have a few options.  The solution from Eon linked above can output either component video or RGB SCART via it’s Wii port, meaning you’d just need to pick up a set of Wii cables.  Insurrection also makes a component cable that performs well.  You can also use the official component cables from Nintendo which are extremely expensive.

If your display only supports 240p and 480i (or if your GC doesn’t have a digital-out port)
Here’s where things get a bit complicated, as not all region GameCube’s have the same output options.  If you’re in a PAL region, your GC will output composite video and RGB, whereas NTSC GC’s output composite and S-Video.

The RAD2x cables plug into any SNES-style multi-out and output 480p HDMI.  The GCVideo solutions are better, as they support all the resolutions the GameCube has to offer and are a true digital-to-digital solution.  There are a few scenarios in which you might want to use them with your GameCube:  http://bit.ly/rad2xnintendo

1)  If your GameCube doesn’t have a digital output port, the RAD2x is pretty much your only solution.  It’ll be fine with PAL GC’s, but NTSC GC’s will default to composite-to-HDMI conversion.

2)  If you have a PAL GameCube, the RAD2x cables will convert it’s RGB signal to HDMI.  If the library of games you play are 480i (or the Game Boy Interface software), the RAD2x might be an excellent solution.  In fact, the RAD2x’s smoothing feature seems to help the look of 480i games, so this might be a bonus for some people.

3)  You’re buying the RAD2x to use with SNES or N64.  If that’s the case and you don’t already own a GCVideo solution, just try it on your GameCube and see what you think.  Even if you have an NTSC GC that will only be a composite to HDMI conversion, it might hold you off until you get a GCVideo solution.

I was curious if there would be a difference between analog solutions that use the digital-out port (GCVIdeo or official component) and RGB out from a PAL GameCube.  I think the digital-out solutions produced a slightly sharper picture than the analog PAL RGB output. I need to test more consoles to be sure and also use the highest quality shielded cables in all scenario’s.  If the results are consistent, it’s not a big difference, but just something to note.  Here’s a quick 480i comparison taken on an RGB monitor…high quality captures will eventually replace these (click on all pictures for full-sized versions): 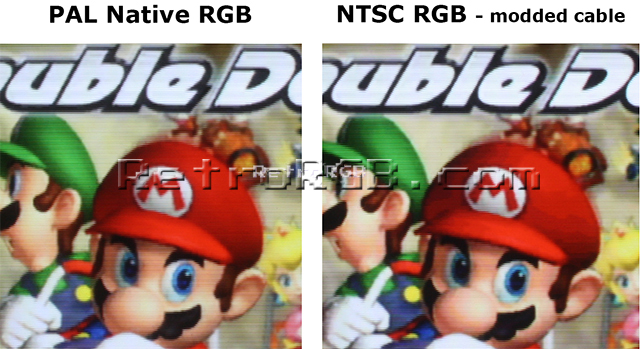 Please click here to go back to the main GameCube Page.  If you’d like info on mods for other systems, head to the Getting RGB From Each System page or check out the main page for more retro-awesomeness.