The Sega Game Gear has multiple TV-out mods available, as well other interesting options.  Please read on for more info: 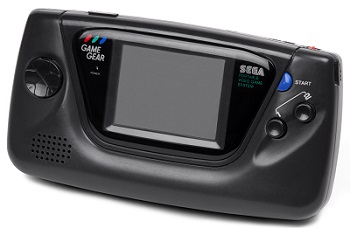 The Sega Game Gear was built as direct competition to Nintendo’s Game Boy.  It is essentially a portable (upgraded) version of the Sega Master System, with many accessories available.  There’s also a large group of developers creating new mods and software patches for the system.  This section will try to provide all the information you need and keep you up to date on all new options.

Capacitor Replacement:
If you’re going to perform any mod on your Game Gear I strongly suggest you take the time to replace all the capacitors in the system.  They are the cause of 90% of all failures on the Game Gear (including screen and audio problems).  It’s much easier to have someone do this for you, so I recommend looking for a local, reputable modder.  If you’re comfortable performing such a tedious task, many retro game online stores sell capacitor replacement kits and you can also check out the links on the right.  Also, the following link has the values for each capacitor on each Game Gear model, so you can order them individually if you’d like:  http://console5.com/wiki/Game_Gear

Summary / Tips:
– In my opinion, the Game Gear’s screen has not aged well.  I suggest either installing a replacement LCD or finding a way to play the games on a TV, either via TV-out mod or romcart / modified rom file.

– If you prefer to play on the original, unmodified handheld, I recommend doing a full cap replacement.  Also consider the Majesco version, as it might be a slight improvement over the original.

– A few Game Gear games such as Fantasy Zone, Power Strike II and some of the Sonic games supported stereo audio.  The SMS Power community is working to find exactly which games support stereo, as well as if it’s stereo sound effects, music, or both:  http://www.smspower.org/Development/MusicEngine-GGStereo

– You can play Master System games on the Game Gear via a converter, but in my opinion the original Game Gear screen ruins the image.