All versions of the PlayStation (and PSOne) support RGB-output, but not component video.

RAD2x HDMI Cable – This is the only PS HDMI cable worth buying at the moment; Zero lag, fast resolution switching and the image is processed correctly.

The PlayStation 1 doesn’t output component video, so a converter is required.  You’ll either want to purchase one of the SCART cables above and an RGB to Component converter, or get one of the solutions below.  Please do not confuse HD Retrovision’s PS2 component cable, with their Genesis cable + adapter – they’re two totally different things:

PS1 consoles all output 240p, so using an RGB cable will get you the best picture.  I suggest using luma as sync to reduce interference found in cables that use composite video as sync.  Either way, if your switch (such as an Extron Crosspoint) requires csync, you’ll either need to order a cable with a sync stripper.  If just your display (not your switch) requires csync, then order the cable without a sync stripper and get a switch like the gscartsw that has high quality sync regeneration built in.

Many games have title screens in 480i, but gameplay and the pause menu’s are all 240p.  This is almost never an issue, as even though there might be a 5-10 second delay for flat-screens to change resolutions after leaving the main menu, the TV will often recover before the game is even done loading.  Also, some games are 100% 480i, meaning the resolution never changes.

A few games such as Silent Hill, Dino Crisis and Chrono Cross have gameplay that’s 240p, but when you enter a menu, it switches to 480i.  On a CRT, this made no difference at all – Since both resolutions are 15KHz, your CRT TV (or RGB monitor) sees the resolutions as the same and the switching is so fast that you might not even realize there’s a difference.

Unfortunately, on flat-screens, this can cause a delay, which means when you leave the menu in Silent Hill, you’ll probably start being killed by zombies before your TV finishes switching back to 240p.  At the moment, the RAD2x and RetroTINK2x are the fastest device to switch between resolutions when gaming on a TV.

Streamers who split the PlayStation’s output signal to game on CRT’s, then send the other signal to a capture card have an interesting option:  Use a scaler that processes the 240p signal wrong as 480i.  Since the scaler always thinks the PlayStation is outputting 480i, there’s zero delay in the resolution switching.  Once again, I DO NOT recommend this scaler for gaming, but for capture / streaming, it’s certainly a decent option.  Check out this page & video for more details.

First and foremost, light guns will only work with CRT TV’s, not flat-screens.  Next, if you plan on playing light gun games with an RGB setup, you’ll either need an early model PS1 that has a composite video port on the back, or an RGB SCART cable with a separate composite video out (linked above).  The games can still be played in RGB, but the light gun itself needs to plug into the composite video port.  Here’s the difference of the most common original PS models (click for full-sized): 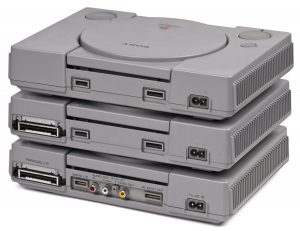 You can disable the blurry dithering effect in most PS1 games by ripping the game and patching the iso.  There’s a tool to auto-patch here and more information can be found on Chris Covell’s site here.

Early model PlayStation 1’s are known for excellent analog audio output.  Specifically, it’s the models SCPH-1001 (USA), SCPH-1000 (Japan), or SCPH-1002 (Europe).  Here’s a few articles that explain more.  There’s even a guide on how to turn it into a dedicated CD player.

Alternatively, other PS1 models can be modded for optical (TOSLINK) audio out.