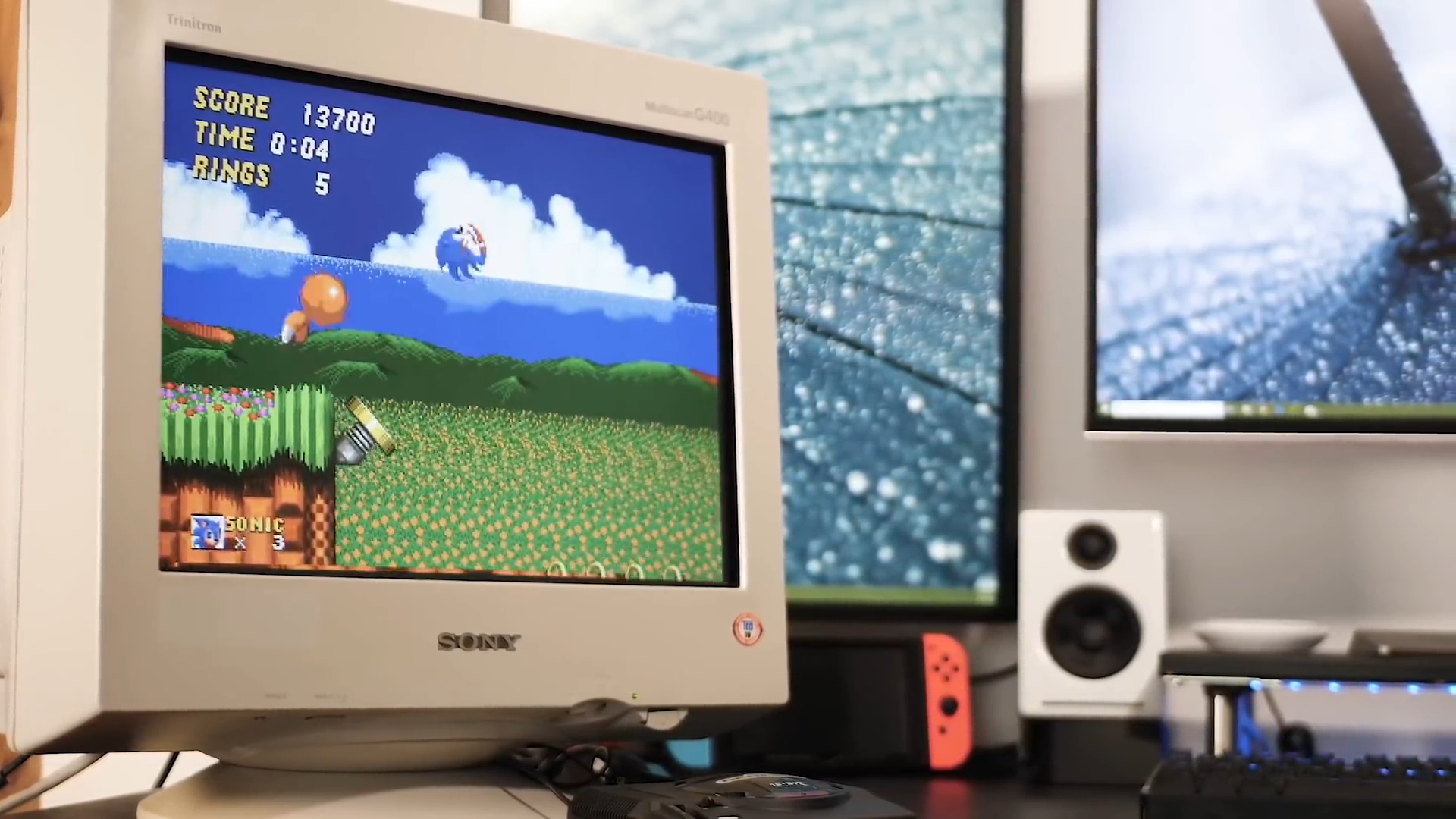 Our good friends at Digital Foundry are having a bit of a PC CRT Renaissance.  A video was recently posted that shares how John Linneman convinced DF boss Richard Leadbetter to try some modern games on a CRT monitor. Now they’re both obsessed with tracking down more of these displays and trying as many games as they can like this.

John is the Digital Foundry team’s resident retro enthusiast and is no stranger to playing 15kHz console games on PVM monitors, but PC CRTs target a different type of content and have a uniquely pleasing character of their own. As pictured above, John has tried devices like the Genesis Mini and even played new-retro games like Sonic Mania on his Sony PC CRT with beautiful results.

Thanks to the scalability of analog technology, some high-end PC monitors from decades past can handle resolutions in excess of 1080p. When lower resolutions are used, refresh rates well above 60Hz are also possible if you have the PC hardware to push it. This has been a revelation to the Digital Foundry team because they’re now seeing that significantly lower resolutions like 720p can feel crisp and clean even in comparison to 4K on a modern fixed-pixel display, meaning that they can let the hardware focus on pushing ultra-high framerates and complex ray-tracing effects. Anti-aliasing is also far less impactful on a CRT compared to fixed-pixel displays, potentially freeing up even more system resources. John argues that it’s only now that we really have the computing power to take full advantage of the high resolutions and framerates possible on this vintage analog technology. Even the best modern PC monitors can’t compete with the lack of motion blur on a CRT.

The video is a fun watch because Richard is always looking forward to new technologies, but you can hear the genuine joy in his voice from having been coaxed back into rediscovering the glory of these obsolete displays. I’ve got a pretty nice NEC PC CRT myself, but I haven’t really tried much of anything more exciting on it than hooking up my Dreamcast to it (not to say that isn’t exciting too). The Digital Foundry crew now really has me wanting to prioritize trying more things with it – how much cleaner could lower-res Switch or Vita games (via PSTV) look on such a display with 720p output? What about 480p from the Mega Sg with scanlines, or the OSSC in 960p with scanlines?

A few years ago, I briefly tested PS2 games on my backwards compatible PS3 using an HDMI to VGA adapter – and now I really want to revisit that and do a lot more tests. Most of us in this community tend to focus on PVMs or standard consumer CRT televisions, but overlook computer CRTs. A lot of people have been asking us to take a closer look at them, and now DF has inspired me to explore their possibilities even further.

If you’ve got an old PC CRT laying around and want to try it out with your PC or modern game console, you can get very inexpensive lag-free HDMI to VGA adapters such as this one or this one. Just as a disclaimer, I’ve tried both, and they work well at a glance, but I haven’t thoroughly tested them.

-Try [My Life in Gaming]