Hey everyone, this is Try from My Life in Gaming. This might seem like old news, but I thought RetroRGB should have a post looking into the Super Nintendo games now available on Nintendo Switch. Coury and I did an “MLiG Mini” on this subject, and while it’s a bit more casual than our usual videos and doesn’t have some more hardcore points like precise input lag measurements, we do get into the overall scaling quality, audio delay, and how it compares to Nintendo’s other HD representations of SNES games.

Personally, I’ve been pretty impressed with the emulation work done by the Nintendo European Research & Development (NERD) team, who previously worked on the NES & SNES Classic Editions, as well as NES emulation on Nintendo Switch. In particular, they have really embraced interpolation ever since the SNES Classic Edition, which is something that even M2 has been neglecting to do. Interpolation is a big deal to me because it lets you get a 4:3 aspect ratio without uneven pixels causing scrolling shimmer. And it’s excellent interpolation – the scaling quality is nearly indistinguishable from the Super Nt. Audio delay is also significantly better than a lot of other software emulation solutions we’ve seen lately – only 2 to 3 frames in the instances we tested. You still can’t completely turn off the border, but at least you can disable the on-screen button guide now. 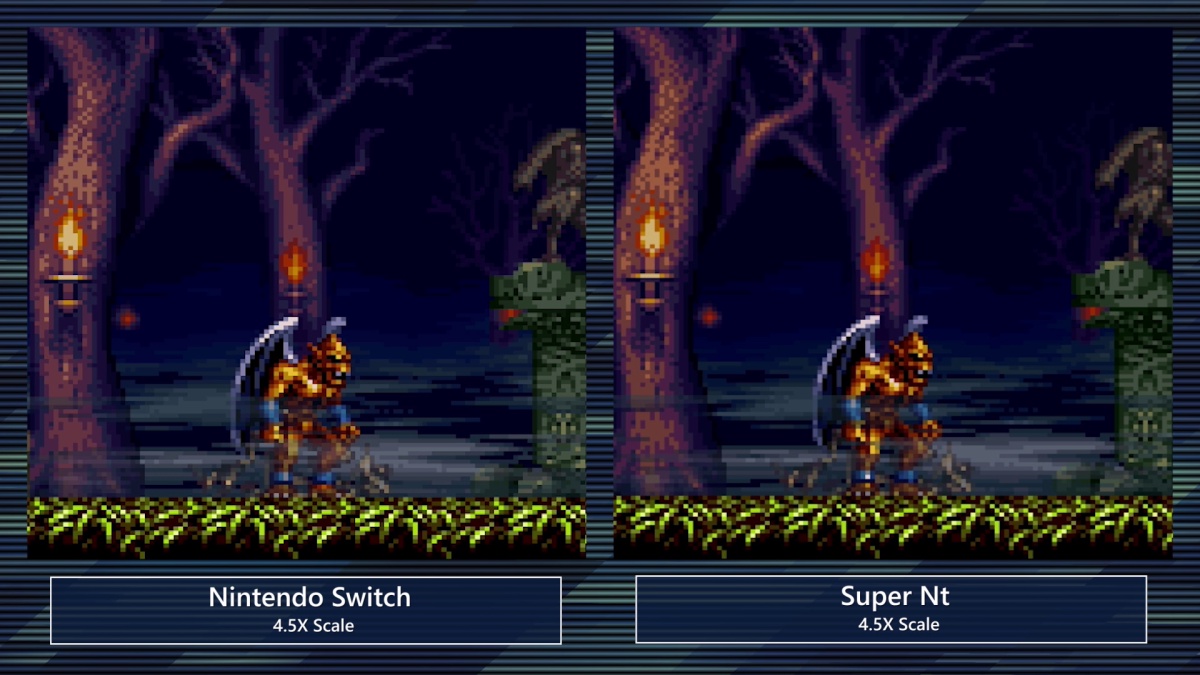 I think a lot of people have been cynical about NES and SNES games on the Switch, saying that it’s so easy to hack, and you may as well just load up whatever emulators and ROMs you like. But most people simply aren’t going to do that. It’s tied to the Nintendo Switch Online subscription service, which is also contentious, but even with fewer features, it’s a service that is far-better priced than its competitors (the family subscription model is a steal and there is no downside to going all-in on that and splitting the cost with a group of friends).

The way I look at it is, I already feel a pretty low sense of ownership over digital games these days, so if Nintendo brought back the $5 and $8 a pop Virtual Console games, I probably would only buy a couple for testing and that would be that. I’d rather just play those games on original hardware. But being a subscription freebie, I’ve suddenly got a pretty decent selection of the SNES’s most essential games (alongside a few middling titles) and now I’ve got an easy way to play those games while traveling. I think it’s a very good experience for that purpose.

If you’d like to hear more of our thoughts on the subject and see a few comparisons, check out the MLiG Mini episode below: