Jotego has just released a “public beta” core for the Capcom Play System 2 on the MiSTer FPGA project.  Anyone can try this core, simply by downloading it from github, manually installing it on their MiSTer’s MicroSD card and loading the roms in the corresponding folders.  You can also get it by enabling Jotego’s beta cores in the “update_all” script – His Patreon subs should do this, but if you’re not subbed to him, you’ll end up also downloading some “closed beta” games, which have a splash screen preventing gameplay.  More info on this below:

Here’s how to update your MiSTer to enable Jotego’s betas.  ONCE AGAIN, if you don’t want to see games (and their splash screens) that are not yet 100% public, don’t enable these and either wait for a full public release, or manually install the CPS2 core by downloading it from the github page.

If you’d like to enable this (all Jotego Patron subscribers probably should), start by downloading the update_all script and add it to the scripts directory of your MiSTer.  Then reboot and make sure you’re connected to the internet.  Once you see the WiFi or network icon appear in the top toolbar, run the update_all script: 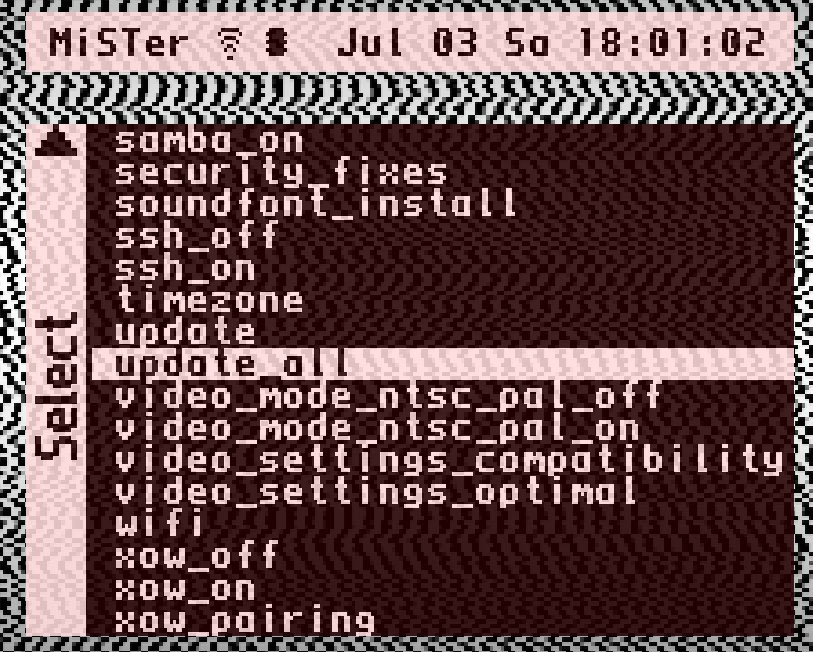 As soon as the scrips runs, you’ll need to hit “up” to enter the settings menu.  If you’re using a CRT, you might not see this screen – If that’s the case, you’ll need to temporarily connect your MiSTer to an HDMI device, in order to see this.  You’ll only need to do that once and next time update_all will run in the background, even if you get a “can’t be displayed” error: 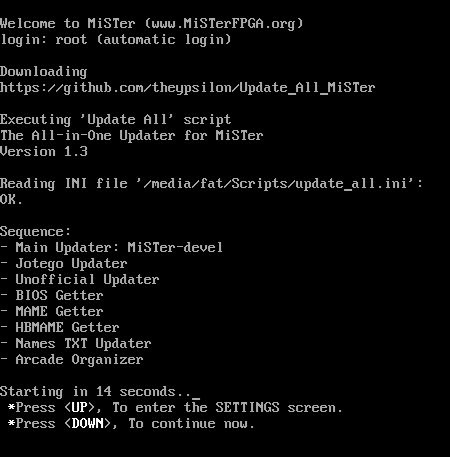 After you hit up, it’ll bring you to the main settings screen.  Here’s how I have mine set.  For the CPS2 core, you’ll want to enter the “Jotego Updater” sub-menu: 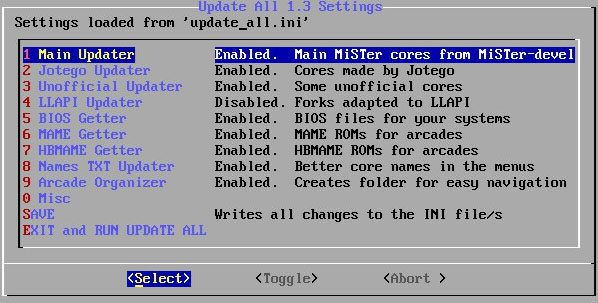 Now set “Install Beta Cores” to “true”, then go back to the main menu.

Then just select “EXIT and RUN UPDATE ALL”.  The setting will persist, so if you ever leave Jotego’s Patreon (or if you’re not a member and don’t want to see games you can’t play), you’ll need to manually disable this using the same process as shown.

…as a note, if you have any of Jotego’s previous betas installed, you might need to delete old files and re-run the updater.  I deleted the contents of the arcade folder (but not the folder itself!), rebooted and re-ran update_all to fix previous problems I had.  The download might take a long time, but it’s the easiest fix if you have issues.

UPDATE:  This post was updated shortly after it went live, to clarify that changing this setting enables both “public beta” and “closed beta” auto-downloading of Jotego’s cores.  There seems to be some controversy over this and I understand both sides.

First, Jotego releases everything for free once it’s completed, but only grants Patreon subscribers access to the beta’s.  This is both to help fund his work, as well as to keep buggy, unfinished cores away from the general user until they’re ready.  Unfortunately, many people have abused this and were sharing the beta cores to people who hadn’t signed up.  Also, manually adding and updating these weekly beta cores (and deleting the previous) was tedious for people that weren’t computer-savy and his subscribers kept requesting an easier way to gain access.  As a result, Jotego worked with the team supporting update_all to add his beta cores as an option to download (with it turned off by default).  Then, he’d allow people to “authenticate” their MiSTer by copying a monthly zip file to the games directory.  Without this zip file, the beta games would have a splash screen covering the whole page preventing gameplay, but with this zip file, subscribers can just run “update_all” with the beta’s enabled each week and only manually change the single zip file once per month.

So far, I understand and agree with all of that.  While his beta cores can still be “pirated”, it’s one more step people who don’t want to pay (but also don’t want to wait for a public release) have to go through – A possible deterrent.  At the same time, it makes things easier for people who do pay.

The part that’s tricky is the “public beta”.  While you can just get the file from github and manually put it in the Arcade directory, most people will prefer the update_all beta updater (the instructions above), which will download all the Jotego beta’s…both the “free” CPS2, as well as all the other ones still in progress with a splash-screen.  Some people interpreted this as “tricking” people into downloading games that tell them they have to join a Patreon account to get access.  I don’t agree with that harsh of an opinion, but I also don’t think combining public and closed beta’s into one updater is the best solution.

Now, of course, Jotego can do whatever he’d like.  He’s the one writing these cores and in my opinion, as long as he continues to open source them (as he always has), he has every right to do whatever he wants with his beta program.  I do agree that enabling one setting shouldn’t download both sets of beta’s though.

As the MiSTer project evolves, we all have to go through these “growing pains” together.  We won’t know what the “right” thing to do is until we try…and what’s right today might not be the best option tomorrow;  It’ll probably always be evolving.  So, I hope Jotego will continue to work with the update_all team to streamline all of this.  At first glance, it seems like releasing the “public beta” as a core people need to download from Github and manually add to their MiSTer…but still be detected and sync’d with update_all is a solution that will appease everyone:  Jotego doesn’t have to feel pressured to release an unfished core early to appease impatient people, everyone can still try it for free with a bit more effort and people who aren’t in Jotego’s beta program can just leave the beta updater off.  Alternatively, if someone wants to manually enable the auto beta updater, that’s something they choose to do (once again Patreon subs should probably do this) and if not, they’ll never see the splash screen, or even know the cores are there until they hit an official public release.

Regardless of what people’s opinions are of this situation, my opinion of the MiSTer project will never change:  It’s amazing and we’re all so lucky contributors are making this happen for us.  Also, please don’t forgot how much work the project lead Sorg puts into all of this and consider signing up for his Patreon as well – As soon as you do, you’ll see all the constant updates, bugfixes and tweaks he ads and it’ll be easier to realize how much work he actually puts in:  https://www.patreon.com/FPGAMiSTer