Laser Bear Industries has partnered with DarthCloud64 to bring a replacement front board with included Blue Retro support for the Nintendo GameCube.  The first round of kits will be open pre-order for as many units as folks would like to get.

Order from Laser Bear Industries in the US:  https://www.laserbear.net/products/gamecube-blue-retro-internal-adapter
Order from CastleMania Games (great if you have CastleCash):  https://retrorgb.link/gcbrbear
or 8bitmods in the UK:  https://8bitmods.com/internal-bluetooth-blueretro-adapter-for-gamecube/ 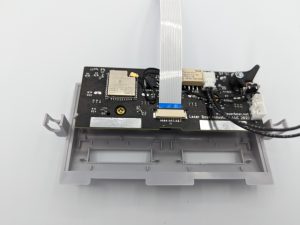 This list shows the average latency of tested controllers.

The GameCube uses a separate board that has all of the controller ports on it that connects to the main system via a simple ribbon cable.
The new replacement board is built to fit in the same space as the original and offer extra features over the original.

This adapter taps into the incoming power of the GameCube allowing for it to act as a power switch. Using the following button combination the system will power down.

This powers off the GameCube in the same way that the main power switch would normally power off the system. To wake it back up you just need to power the controller back on, or hit the reset button to wake the console. (Note when powered off in this manner the main power switch will not wake the console only a Bluetooth controller or the reset button will wake it back up)

The reset button on the console has been converted to offer new functionality based on how long you hold the button down. While it is being pressed the front ports will light up to show which state you will be enabling.

Holding for 0-3 seconds will perform the same action as on a stock console, reset.
In this state all four front port LEDs will be solid on

When the system is placed in power down mode the reset button will wake it with a single press.

If you power the system off with the main power button, and hold reset while powering on the BlueRetro adapter will be in sleep mode and will not interfere with the console use this in the event that a peripheral is not working nicely with BlueRetro

This product supports the BlueRetro project for continued support and added features as time goes on.