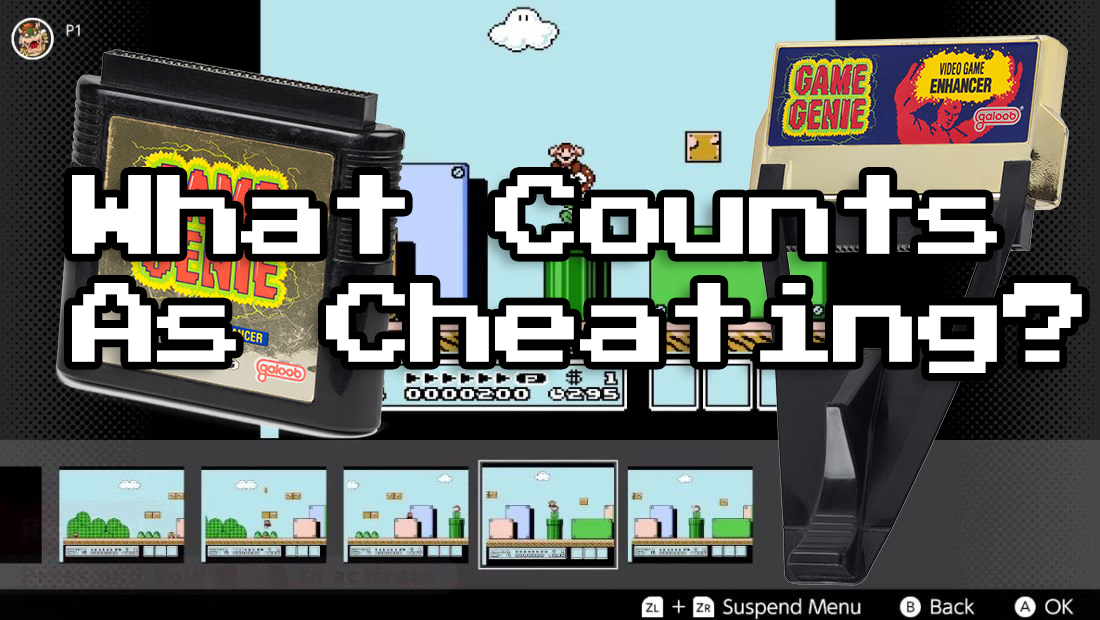 Recently, Cinnemassecre’s Mike Matei posted a Tweet asking if it was still fair to say you’ve beaten a NES game, if you’ve used the Switch’s new “rewind” feature.  The tweet seemed to stir the pot a bit and (in my opinion) it was very easy to spot the generation of gamers responding, as well as the skill level.  Let’s discuss…

UPDATE:  This post is written by me (Bob) and directed towards people who choose to discuss their gaming experiences with others.  These opinions may or may not reflect the options of the other writers and any hate should be directed my way.

Ever since 1987’s Contra became a mainstream game in my elementary school (a few years after release), people often talked about beating it – And the discussion was always met with: “Yeah, but did you use the code???”  Even at around 8-years-old, our child brains were still able to make the distinction between someone who put the work and effort into the game to beat it using the standard three lives you get when you hit start, or if you used the “Konami Code” to get you thirty lives.

A few years later when the Game Genie was released, this also seemed to be a “no brainer”, but with a twist:  The Game Genie would allow you to add “cheat codes” for things like invincibility and infinite lives which was clearly cheating, however it also unlocked a world of possibilities that the original game couldn’t provide.  It also offered the opportunity for players to practice levels later in the game, so when they did a “true” runthrough, they were more prepared.  No one was “shamed” for using Game Genie, but kids would almost universally say things like “oh yeah, I beat it, but I had to use Game Genie”.  No one was really looked down upon for cheating, as long as they were up front about it.

That mentality has stayed with me to this day, with seemingly never any need for discussion:  No one (that matters) has ever tried “shaming” me for cheating in a non-multiplayer game, as long as I disclosed the cheat.  I’ve even made cheating a main part of the discussion of how much I like a game and often say things like: “The game was structured so well, I only cheated once to look up an item location”…and yes, I count looking up a solution online as cheating.

My perspective on these things has been solidified after having the honor and pleasure of working with professional gamers.  Seeing things like a “no damage run” of a game I couldn’t ever beat without cheating has blown my mind and the skill and talent needed to achieve something like that is unfathomable to me.  It’s my very strong opinion that when you beat a game, there’s always an addendum required that explains how – and that’s across the entire spectrum;  Someone who beats NES Castlevania without any cheating absolutely deserves the bragging rights, but I think we’d all agree that someone who does the same thing without taking damage is a more skilled player.  Mike’s tweet was limited by the Twitter character limit, but it’s clear to me that he meant the same thing;  Someone beating Ninja Gaiden using rewind doesn’t deserve the same credit as someone who beat it without rewind or any cheating at all.

What is a pretty interesting debate to me, is: “What requires disclosure?”  Using cheat codes is pretty obvious, but what about using a turbo controller?  And if you think that does require disclosure, what about consoles like the TG-16 that had turbo built in, or the Japanese SMS (MK-2000) that had a rapid fire button?  What about using emulation?  Even if you don’t use any cheats, is that something that should be brought up in conversation?

It’s a debate I’d be interested in hearing people’s opinions about, from all gaming generations and skill levels.  One thing’s for sure though, my answer to Mike’s tweet is clear:

Yes, you can say you’ve beaten the game even if you’ve used rewind, but that is not the same skillset as someone who did it without cheating and it needs to be disclosed.

Retweet if you agree: If you use the “rewind feature” that’s now standard on many NES and SNES games available on Switch, you DID NOT by any stretch of the imagination beat the god damn game.