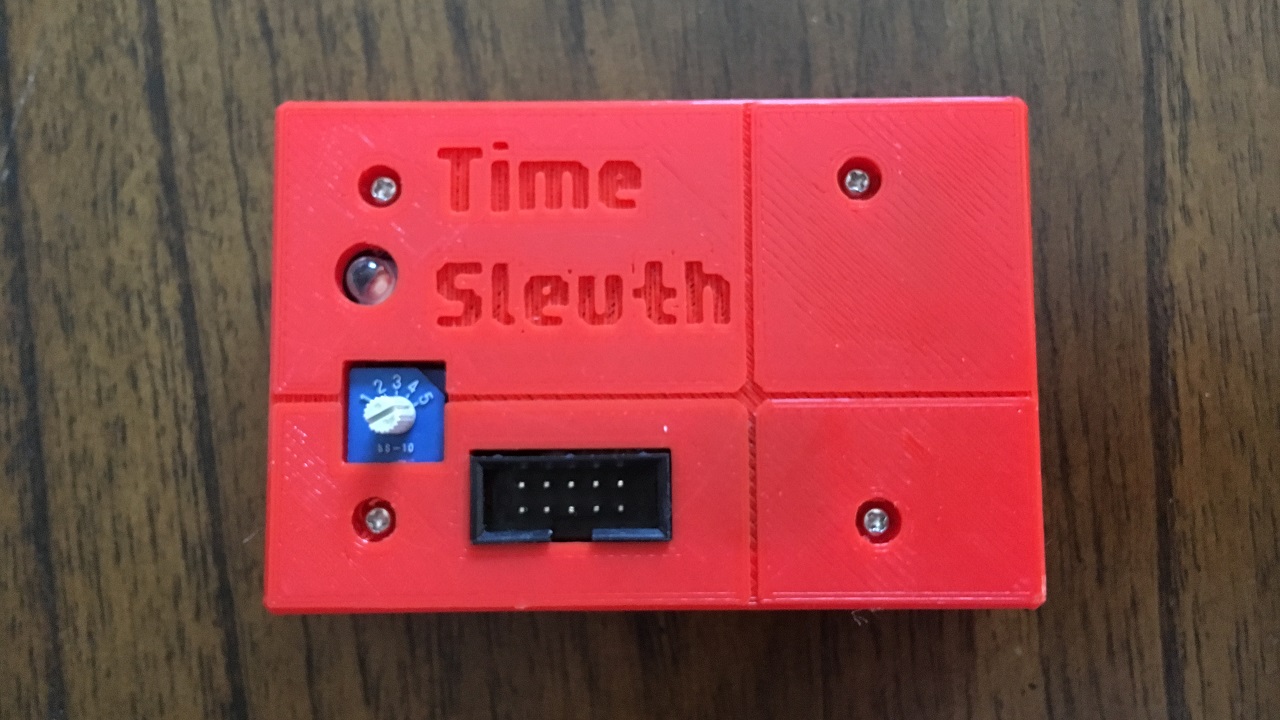 I was lucky enough to try the latest device from Christof and Dan:  The Time Sleuth HDMI lag tester.  tl;dr – This is the new standard in testing display lag.  Period.  Read on for the full review and get yours here:  https://bit.ly/timesleuth

Previously, the only other dedicated display lag testing device available was the Leo Bodnar box, available in 720p and 1080p modes.  That’s it on the left, next to the much more compact Time Sleuth: 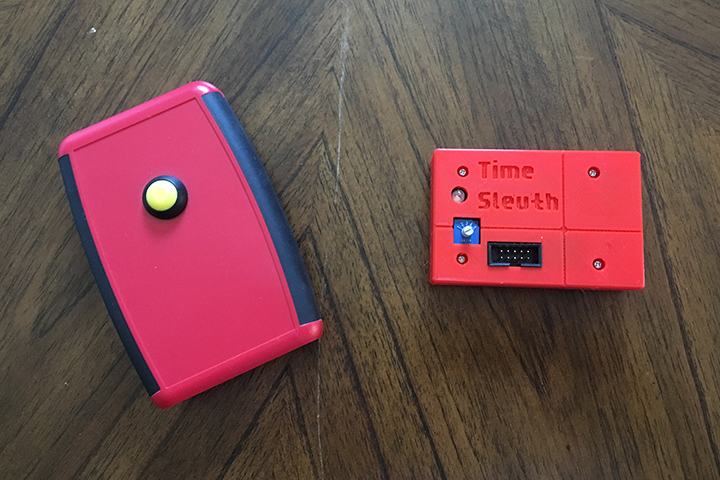 The Leo Bodnar is powered by two AA batteries and damn do they drain fast!!!  I only get a few uses out of it before I needed to recharge or replace the batteries! 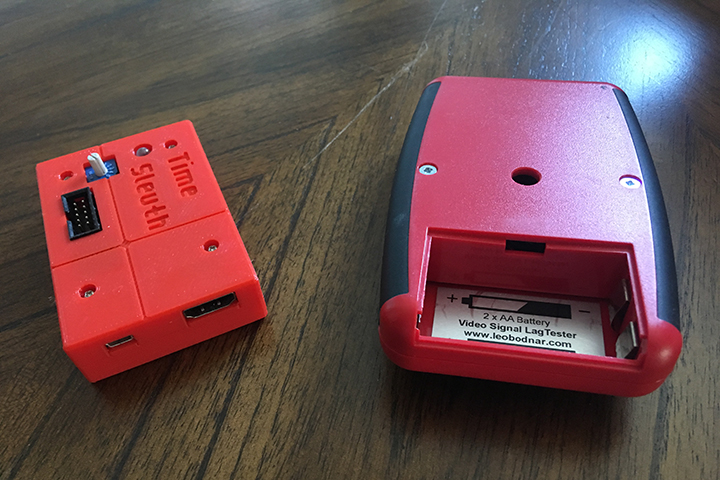 Alternatively, the Time Sleuth is powered only by USB.  That means you can power it directly from the TV, or even use one of those cellphone charge packs for extended use: 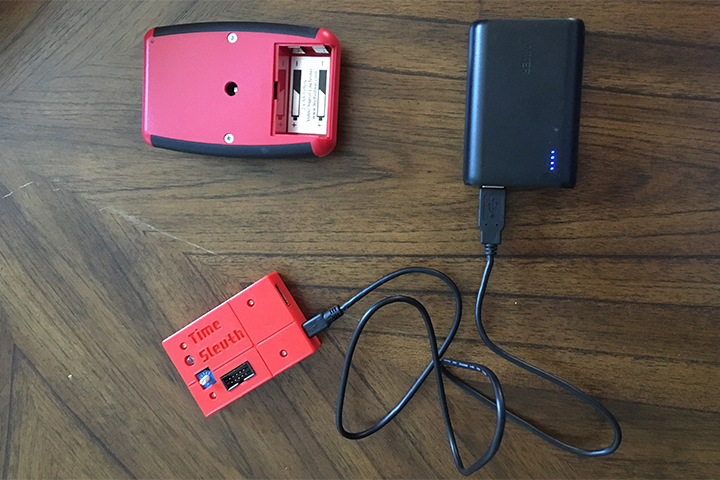 Lastly, the Leo Bodnar boxes are locked to one resolution, while the Time Sleuth is switchable between five resolutions, selectable via a dial control.  You can generate any resolution you’d like on each channel, by using this online configurator to download a custom firmware:  https://time-sleuth.i74.de/

Then just flash that firmware to the device via the JTAG port and a PC programmer.  The current list of supported resolutions are as follows:

Here’s how I had mine configured: 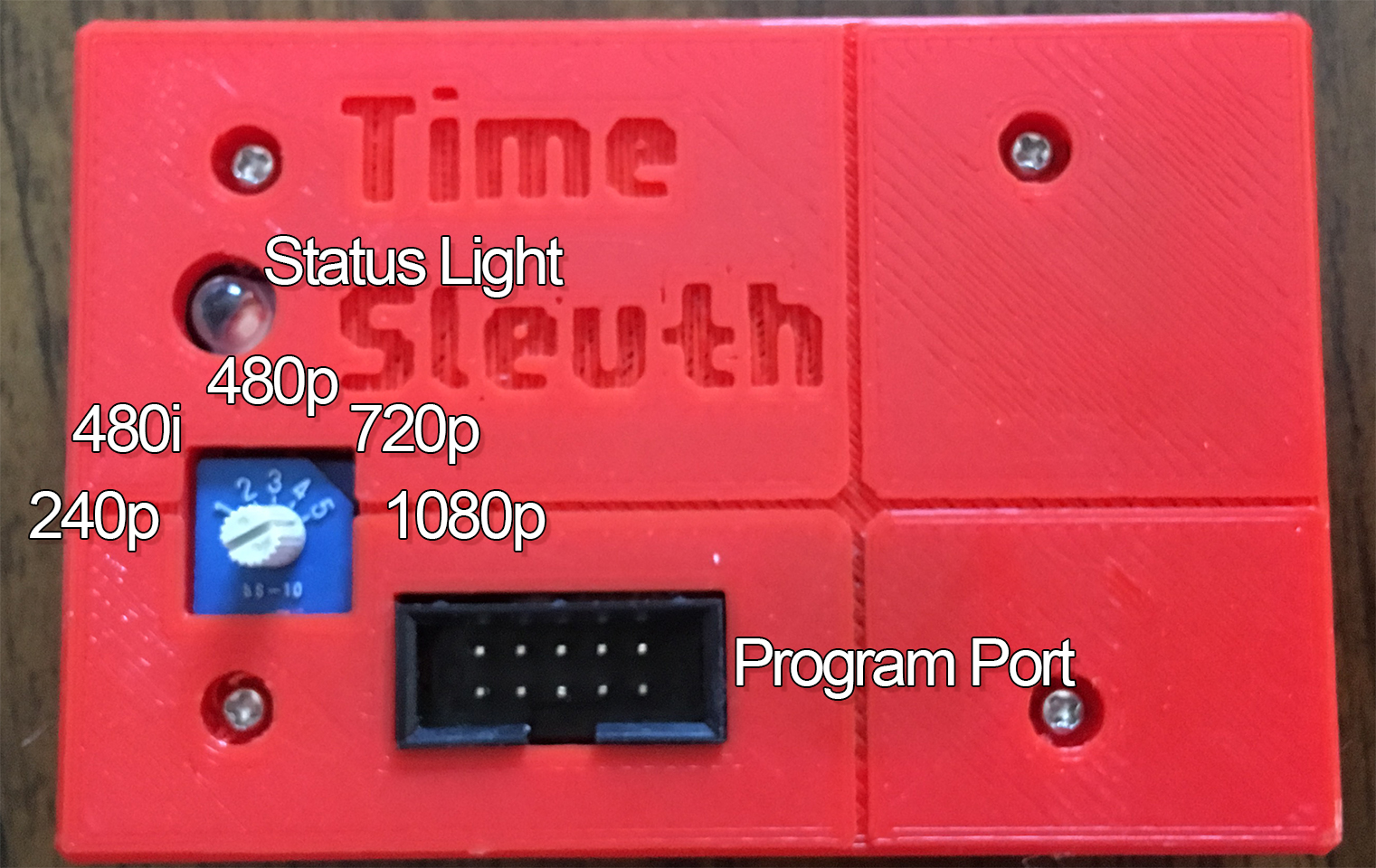 There’s also a status light that blinks at the same time as the screen flashes.  While that might not seem like a big deal, I ran into many scenarios when I wasn’t getting an image on-screen with the Leo Bodnar device; It would always take me a moment to figure out if the batteries ran out, if I was on the right input, etc.  Also, you can use a slow motion camera to verify the results of the Time Sleuth, thereby lag-testing the lag-tester ;p

The way both devices work is by flashing a white bar on the top, middle and bottom of the screen.  You then hold the device over the white bars and its sensor scans how much time it takes from when the signal is generated to when it shows up on-screen.  Flat-screen’s draw the image top-to-bottom (I’m over-simplifying here; describing how TV’s work is a separate thing in itself…), so it’s often thought a fair measurement of display lag is to measure the middle of the screen.  The Leo Bodnar tests one at a time and the Time Sleuth will average all three if you’d like.

I started by testing my TCL 43S517 with the 1080p version of the Leo Bodnar tester.  Everything seemed to work fine and I got a good reading using the test point in the middle of the screen: 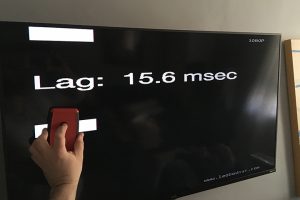 Next, I went through all the resolutions using the Time Sleuth.  The first thing you’ll notice is the much more detailed results!  The current lag is displayed on top, as well as averages between all three test points (top, middle, bottom).

Please keep in mind that I was also trying to juggle a camera while holding the device steady, so all my averages in these pictures will be off, since I kept accidentally moving the device around! 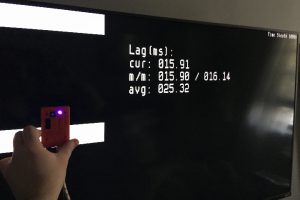 You can see the Time Sleuth has a slightly different measurement than the Leo Bodnar on 1080p.  I was also able to test all other progressive scan NTSC resolutions and as I always expected, there was a slight difference between them: 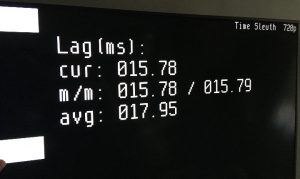 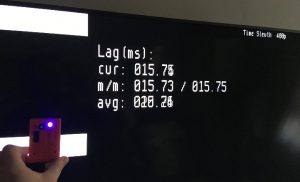 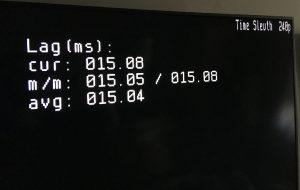 I imagine with more extensive testing, the progressive scan resolutions would all average within a millisecond of each other, but this does demonstrate the point that TV’s scalers will react slightly differently to each resolution.

One very surprising result was how huge of a difference 480i was compared to the rest:  About four times the lag as progressive scan!!! 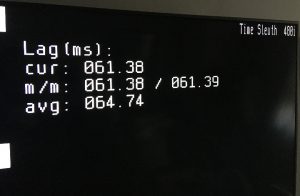 One complaint I often voice about the Leo Bodnar is its compatibility with certain displays.  In my testing, I found the Time Sleuth to be compatible with every device I tried, including my curved-screen OLED and even CRT’s via an HDMI to Component converter!

I posted my final results (with correct averages) in the spreadsheet on the main Lag Test page:  https://www.retrorgb.com/lagtest.html.  I strongly encourage everyone who owns this device to do the same!  Not only do we need solid info on what displays have the lowest-lag for gaming, it’ll also be great to finally have a reference for specific situations like 480i gaming!!

The Leo Bodnar devices are around $98, while the Time Sleuth is $80 without a case and $95 with case made from ABS plastic (a prototype 3D printed case is shown in this review).  While I wouldn’t call either a “cheap” device, you certainly get more for your money with the Time Sleuth!

In my opinion, the Time Sleuth is the new standard in display lag testing.  I hope anyone interested in display lag will purchase one and include the test results wherever applicable.  You can get yours here:  https://bit.ly/timesleuth

(as of October 5, 2022 - More infoProduct prices and availability are accurate as of the date/time indicated and are subject to change. Any price and availability information displayed on [relevant Amazon Site(s), as applicable] at the time of purchase will apply to the purchase of this product.)
Liked it? Take a second to support Bob on Patreon!