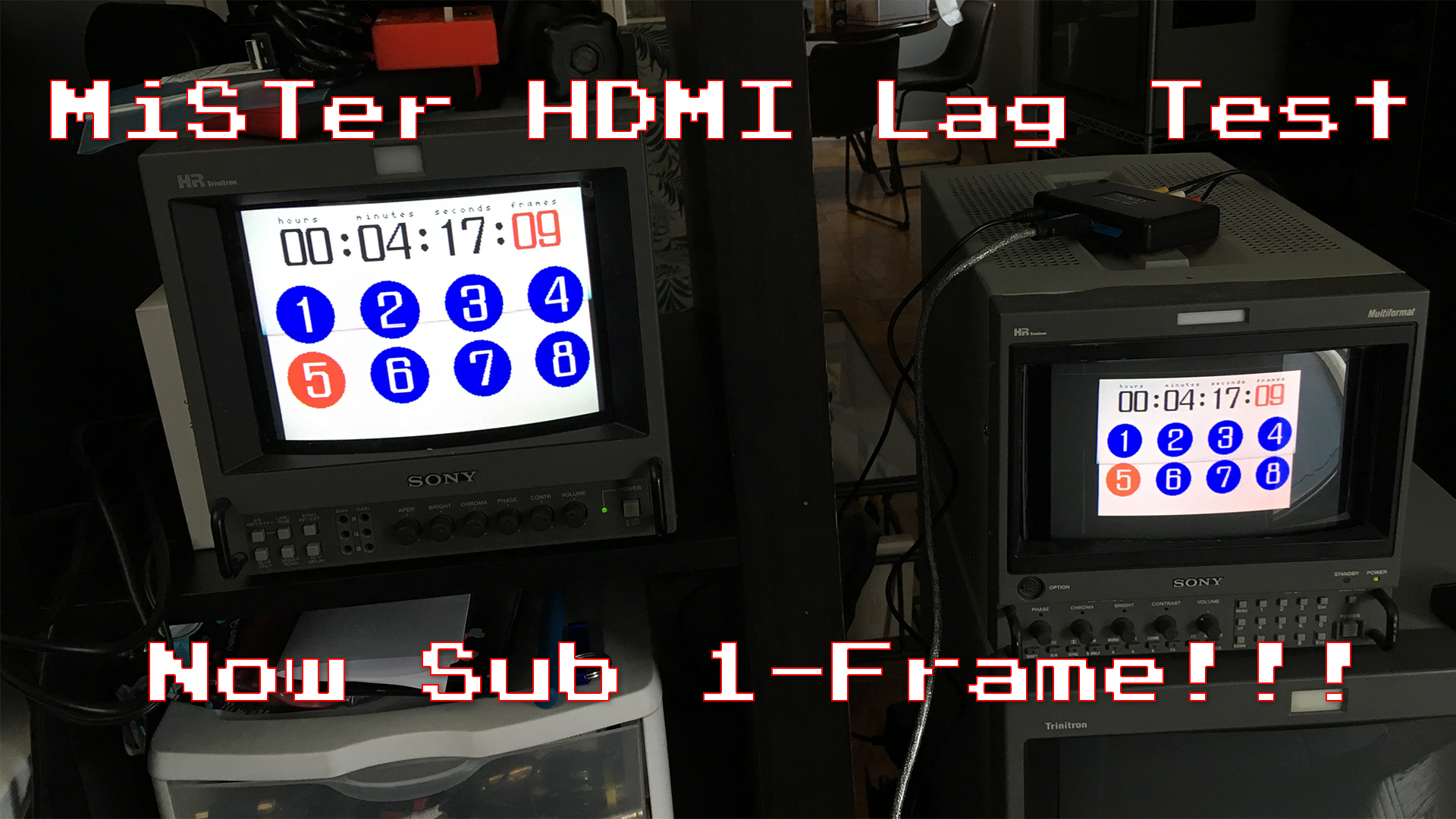 I recently performed lag tests on the updated MiSTer HDMI scaler written by Grabulosaure and found that the lag is now less than one frame!

My test method consisted of running the RGB output of the MiSTer into a Sony PVM monitor via the core (console)’s native resolution and refresh rate.  I then ran the HDMI output in 720p into an HDMI-to-Component converter, then to a Sony BVM 9″ that accepts HD resolutions.  This is the same converter I used to test the Time Sleuth, so I can guarantee it doesn’t add any lag.

I then used a 960 frame per second camera to demonstrate the difference between the RGB and HDMI outputs.  As an FYI, the picture used at the top of this post was shot with an iPhone.  While those pictures will look better, they’re not good for lag testing, due to the way the camera records the image (as well as the shutter speed).  I strongly prefer using a 960fps camera for lag testing, as each frame of video is approximately one millisecond, making measurements like this easier to calculate.

As for MiSTer configuration, the only “custom” setting was to make sure that vsync_adjust is set to 2 in the mister.ini file and the resolution is set to 720p (although all resolutions should have the same results).  Other than that, everything else was a basic MiSTer 4.0 setup with all the latest updates performed.

I then fired up the 240p Test Suite’s lag test and began shooting.  The video showed the times matching pretty consistently throughout the entire video, meaning almost zero latency is being added to the HDMI output!  Here’s a still shot, but please excuse the blurriness;  It’s hard to capture CRT’s in slow-motion! 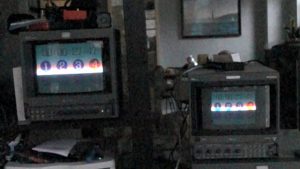 This was a big improvement from the last time I tested the MiSTer’s HDMI output, where it was consistently just under two frames!  If you take into consideration the variable 1-3 frames of lag your average TV’s panel ads, that starts to get very noticeable during most gameplay: 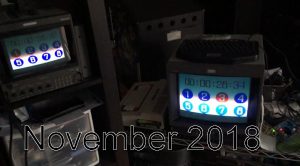 I also decided to test the NES core’s latency, just to have a second set of results.  Excuse the awful picture (sorry), but I was able to confirm the same findings with a second core: 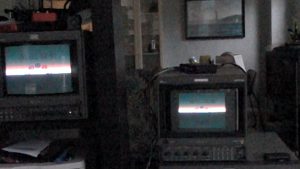 So, there you have it!  Not only is the MiSTer platform constantly evolving and adding new and amazing features, but it’s shaping up to be an excellent way to experience these games on a flat-screen TV!  Please remember to support all the amazing MiSTer dev’s any way you can.  Simply following and spreading the word is a great start, but maybe consider subscribing to their Patreon accounts as well?

(348)
$6.99
Expands into 4 USB Ports for Raspberry Pi Zero v1.3 (with camera connector) and W (with Bluetooth and Wifii), Orange Pi, ODROID, Banana Pi Compatible with Samsung Galaxy S2, Samsung Galaxy Note, Samsung Galaxy S3/S4, Galaxy Tab3 8.0, Sony Xperla NX-0... read more
(as of November 24, 2020 - More infoProduct prices and availability are accurate as of the date/time indicated and are subject to change. Any price and availability information displayed on [relevant Amazon Site(s), as applicable] at the time of purchase will apply to the purchase of this product.)
Liked it? Take a second to support Bob on Patreon!