On March 2nd, 2022, John Romero, the father of the original Doom series, released a Doom 2 level titled “One Humanity.” The one level WAD file is being sold for €5 (which currently converts to $5.80 USD), giving all money to “To support the people of Ukraine and the humanitarian efforts of the Red Cross and the UN Central Emergency Response Fund.” 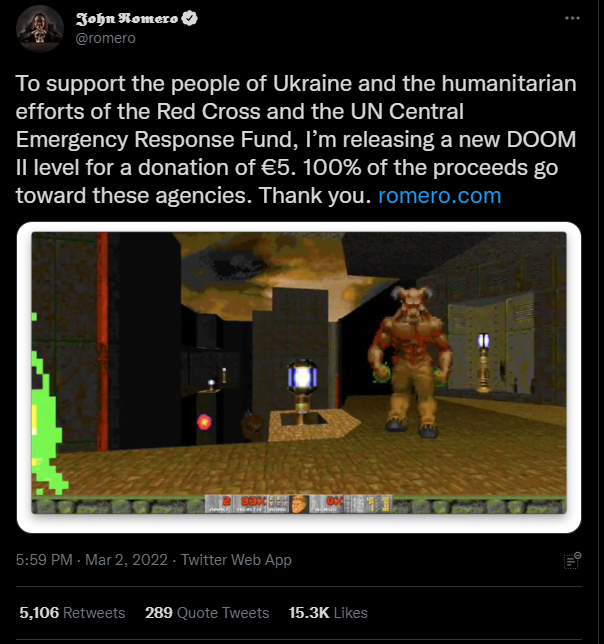 How to Play (Windows):

Unless there is some magical trick I am forgetting, the custom WAD file would not load with my Doom 2 copy through Steam, even when adding the parameter -file one-humanity.wad. However, I was able to use the assets from the install (mainly the original WAD file) with GZ Doom to play the level.

Note: If you don’t want bullet holes to show, open a console (press ~) and type “cl_maxdecal 0”

Not having played the original Doom Series on a computer in well over a decade, I knew I was up for some relearning. I ended up playing Doom 2 from Level One up to “Tricks and Traps” (The first level introducing the Cyberdemon). I felt like at this point, I stood a chance.

Well, I was slightly mistaken. One Humanity is not linear at all. I love the fact there are very small and subtle hints on what to do, nothing is really thrown in your face on how to proceed to the next part of the level. As with all levels in Doom, the main objective is to keep pushing and not die.

The level was a good challenge, not over the top Dark Souls or Savage Difficulty Raiding challenge, but enough to not make you rage quit while keeping you wanting to see the level to completion. If you are familiar with E4M1 from Final Doom, then you should have a better idea of what you’re about to experience. There’s one massive area, constantly reused while unlocking puzzles and avoiding attacking monsters. The level shows Romero’s passion for the game, even decades later.

Eventually you will learn the pattern of the level and where certain monsters will patrol, making the level less difficult. Somehow the level has a par time of 2:24 which I don’t see possible, unless being ran by a TASBOT.

I’ve beaten the level several times at this point and still enjoy it. If Romero released another 32-level set of Doom 2 maps with Putin as the bad guy at the end, I’d buy it, no question. There was an update offered to previous purchases on March 4th; however, it explains different methods on how to run the game if you’re new to using custom WAD files.

I recorded my most recent successful play of the level which is viewable here:

While refraining from being political, I believe the vast majority of everyone can agree that what is happening in Ukraine to be a horrible war crime. Major props to everyone around the world who have donated, whether monetary, by providing shelter, renting empty Air B&Bs, even passing on the word to others on social media. John Romero is providing another outlet for support while providing his fans entertainment. Even if you don’t have any intention of playing the level, consider making a purchase, simply to provide support to Ukrainians.

If not, and you are able and willing, here are other ways to show support – 13 Ways To Help The People Of Ukraine Right Now (forbes.com)