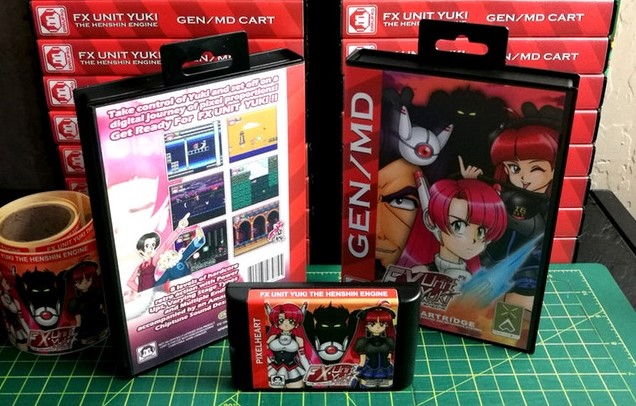 In mid-2018, the Turbografx and PC Engine CD received a new action-platforming game titled FX-Unit Yuki: The Henshin Engine.  Following a successful kickstarter campaign, backers were able to participate in a survey to choose a console port for development after the original version was completed where the Sega Genesis won the popular vote.

Now, nearly a year after the original game was released, the survey finally bore fruit and the Genesis / Mega Drive port of FX-Unit Yuki is now available.

Kickstarter backers are receiving the Genesis versions while the Mega Drive version (that also works on Genesis) is on sale at Pixelheart.eu.  The games are manufactured by Joshprod, with full color manuals, clamshell cases, and of course, a physical cart for about $50 USD. Unfortunately, there ARE some caveats with these releases, as you’ll see below.

Per Pixelheart, there will only be 100 copies of this game without a restock.

There is also another interesting side note. Pixelheart website, Kickstarter, and even series head Sarumaru have confirmed that the cartridge will only work on Model 1 consoles and/or various clones.

NEW GAME COMPATIBLE WITH MEGADRIVE 1 ONLY AND GENESIS 1
Stop SG Corporation from hacking into the CJC video game!
Take the role of the young Yuki Shirokawa, the new beta-steller of the JEC company. Transformed into an FX Unit Yuki when it approached the FX Engine too close, it is now able to get into the game and chase away the malware of SG Corp and its champion: Ultradrive Unit Geni. Go through the 8 different levels, mixing platform game and shoot’em up, taking care of the many traps, enemies and formidable bosses.

Posted by Sarumaru (Creator)
That’s right! Genesis FX Unit Yuki games are shipping now so we hope everyone made sure their address info was updated when we asked about it in the last update! So we were supposed to be getting the Dreamcast version of the game but we are still waiting on those to arrive. However, we did get the MD/Genesis games sooner than we expected and have already been shipping them. This update is a bit late because I fell ill but we continued to process orders regardless and everyone will be receiving their games with some of you already receiving your copy of the game. More to come very soon!

EDIT: These carts work with Genesis/Mega Model 1 and clone consoles only. They do not work with model 2 systems and CDX systems due to a conflict with the soundchip and board. Details on this later. If this is a problem, we can switch it out for any other version of the game for you.Thanks everyone!

@_Sarumaru Hey Saru, I ordered the Mega Drive/Genesis version of FX Unit Yuki from Pixel heart. Do you know if it will play at the correct speed on the Genesis?

I can confirm it does, I have received the carts for our Kickstarter backers and they work but does not appear to work on the Genesis model 2 or CDX. Model 1 plays it fine and so do clone consoles.

I can confirm that the game works on the Mega SG, Super Retro Trio, and even the VA7 Model 1 Genesis which from what I’ve been told, is a Model 2 in disguise.  The game does not work on a Retron 5. The Retron will dump the game and then display a garbled screen.

I also took the cart apart to see what its insides looked like, and here you go: 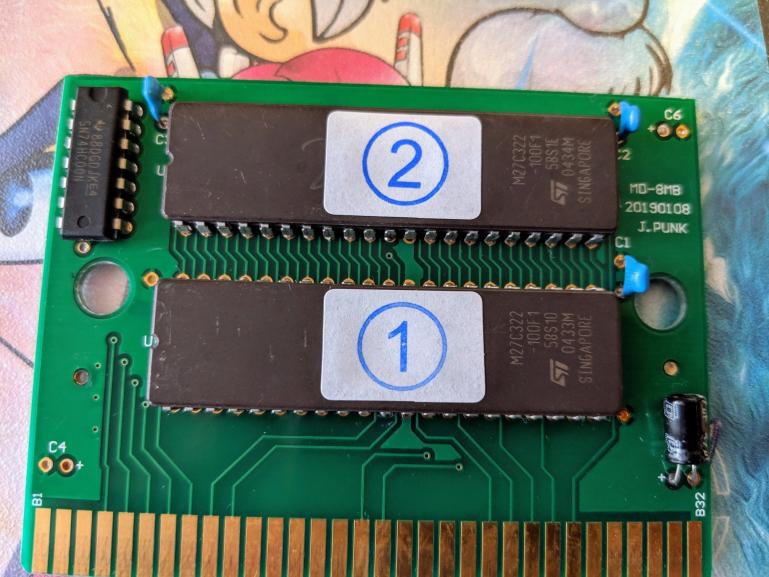 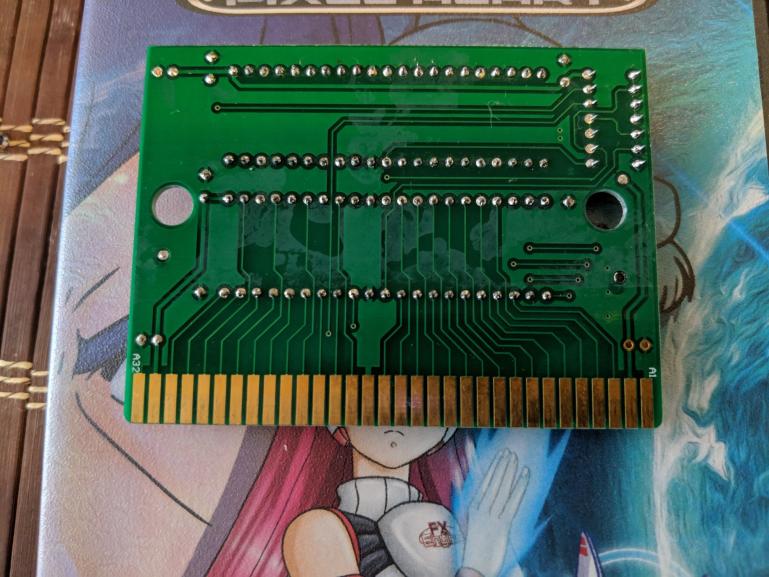 For the more technically curious among you,  DB Electronics has confirmed that there are 5V native M27C uvproms used on the board. A huge thanks to Rene’ for helping identify the chips.

As per the game, it was made on a rather slim $35000 USD budget which was stretched among four (PCE, MD, DC, PC) platforms. As such, the game does have some minor bugs, but is fully playable and can be completed.

The Genesis version has *more* slowdown than the original PCE CD version with a noticeable drop in colors and the (obvious) removal of (the AMAZING) CD quality music.  The game may not be for everyone, but it does have a ton of homages to classic games such as Lords of Thunder, Bonk, Wonder Boy, Castlevania, and others.

With that said, collectors will still most likely want this version as it is still a brand new IP developed from the ground up for these classic consoles.  If the sacrifices made are too much to bear, you may want to wait on the Dreamcast versions which are improved over the original and cheaper.  Pre-orders are available via Pixelheart.eu and fxunityuki.com with limited quantities available.