Analogue has started shipping the replacements for the faulty Mega Sg Game Gear adapter.  The new adapter looks the same on the outside, but the internal circuit board seems to have quite a few routing changes, as well as a switch from through-hole to surface mount components.  Oddly enough, there’s still pads on the back for SMD components that aren’t populated:

The set included adapters for Game Gear, Sega Card and MKIII cartridges and they all used through-hole components, except the Game Gear v1.1 replacement.  Each of the adapters appear to use hard gold contacts and their edges are beveled, so the build quality can be considered very high. 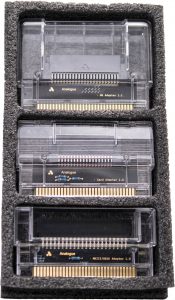 I’m just very curious about the design choice, as well as why the adapters were faulty at all.  Analogue hasn’t released any details on the issue, however they certainly were able to ship replacements out very quickly…especially considering the current circumstances.