According to Mark S. with The Video Store Shopper (aka Media Shelving), the Universal Game Case has officially been discontinued. The Universal Game Case was the go to case for a long time for systems such as SNES, N64, Genesis, Famicom, 32x, CDs. They could fit NES games by making a permanent modification; which is how other companies as Custom Game Cases came about with competing products (posted with permission of the sender).

There are still some in the wild through Amazon and AliExpress for extremely high prices, ranging from $3 to $7 a piece. I was unable to find another store selling as most stores said not in stock or on backorder.

The Universal Game Case help drive a large portion The Cover Project although it has expanded to other projects such as Shadowfox Cases and BitBoxes. Both are still in production. 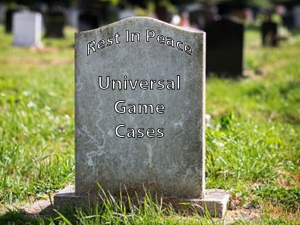