Modern Vintage Gamer (MVG) just released the first video giving his initial thoughts and hands on of the all in one retro console named Polymega.  (If you have not watched his video yet, please give it a view.) He received a beta unit from the developers and has been putting the machine through its paces.  He noted that the device appears to have been used before receiving it, and as a beta unit should expect these type of devices to not be indicative of the final product and is subject to change.

In the video MVG spends a good deal of time showcasing the capabilities of the CD disk drive.  Displaying the games from the Sega CD, Sega Saturn, NEC TurboGrafx CD, SNK Neo Geo CD, and Sony Play Station operating on the Polymega.  He did not receive the other units that are marketed along with the Base Unit CD console.  The other units marketed, attach onto the top of the Base Unit CD console and give the system its all in one modular capabilities.  The separate units comprise of a cartridge and control port module based for the Nintendo Entertainment System (NES), Super Nintendo Entertainment System (SNES), Sega Genesis, and NEC TurboGrafx.  Each module unit will be sold separately and have stated they they are region free.  The Polymega is bundled with a 2.4GHz USB dongle to pair with it’s wireless controller, the Base Unit Polymega is slated to be launched in June 2020 and is showing $299 from the website.  Other controllers are shown as well and they are themed off the different classic consoles they represent.

MVG lays out his overall impressions so far but stresses that this is a beta unit and should not be indicative of the final product.  He does cover emulation issues like having to import an official BIOS. As well as comparing and contrasting issues he has been able to duplicate across other forms of emulation and overall compatibility issues.  MVG also discusses the usability of the packed in controller and his thoughts on its potential for input lag.  Bob from RetroRGB has also done test on the Polymega’s input latency and has noted positive results when he tested.  One other interesting note with MVG’s video is he opens up the system revealing the custom board layout and the processor used in the design for the Polymega.  Overall MVG sees the Polymega as having potential and is positive for the future release and continue development.

Bob helped capture this image direct form downloading MVG’s video.  Though he stresses that YouTube video compression can make it hard to convey images properly.  He suggest opening the image to 100% and comparing side by side with source images that the reader has.  There is definitely way more to this story, and MVG has stated that he will be doing more videos as he get to testing additional areas of the console.  Definitely stay tuned to his YouTube channel, and as always links below. 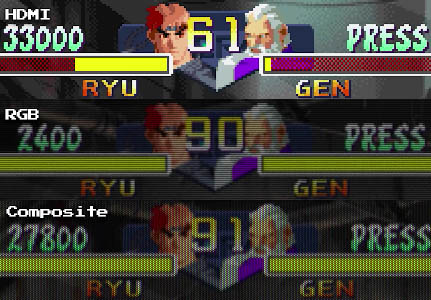