Splitting an HDMI signal is something all gamers will probably require at some point.  Whether it’s capturing footage, livestreams, or just having the ability to use more than one display, people are often looking for the right device for the job.  I wanted to determine a few different splitters that were affordable and had all the features gamers needed…and I think I found two:

Before I even begin this review, I need to warn everyone about a common problem with these cheap devices:  Consistency.  You’ll often find multiple brands using the same case, but with different branding and different electronics.  It’s also common for a company to switch the chips used inside (especially during a global part shortage), resulting in something you buy today not performing the same as something that looks identical that you bought a few months ago.  Still, because of the low price and excellent performance of these two, I wanted to share this review.  Let’s begin…

Both devices are a 1-in, 2-out, HDMI splitter, with full Open Source Scan Converter compatibility:  I tested with a Super Nintendo in 5x mode and the signal passed through completely unaffected.  It didn’t “normalize” the signal in any way, but it didn’t change it either.  So, basically, if your OSSC worked connected directly, it’ll probably work the same through both of these, but this isn’t a magic fix tool either.

UPDATE:  I’ve heard reports that these might not work with VRR (variable refresh rate) setups.  If your modern console supports VRR, you might need to find another choice.  For the price, I still think it’s worth trying.  Anyway…

I tested them both up to 4K60, with uncompressed 4:4:4 colorspace and they both performed perfectly.  Here’s some screenshots using a dynamically-scaling pattern Fudoh sent me, the same one I used in the Avermedia Live Gamer 4K review (which I also used for these 4K screenshots using the same methods shown in the review): http://pms.hazard-city.de/ExtronVector4KTestPattern.html

The Ezcoo’s on top, Avedio on the bottom – And make sure to click on both for full-sized views, otherwise it won’t line up.  Note the text looks perfect and the border lines are all even: 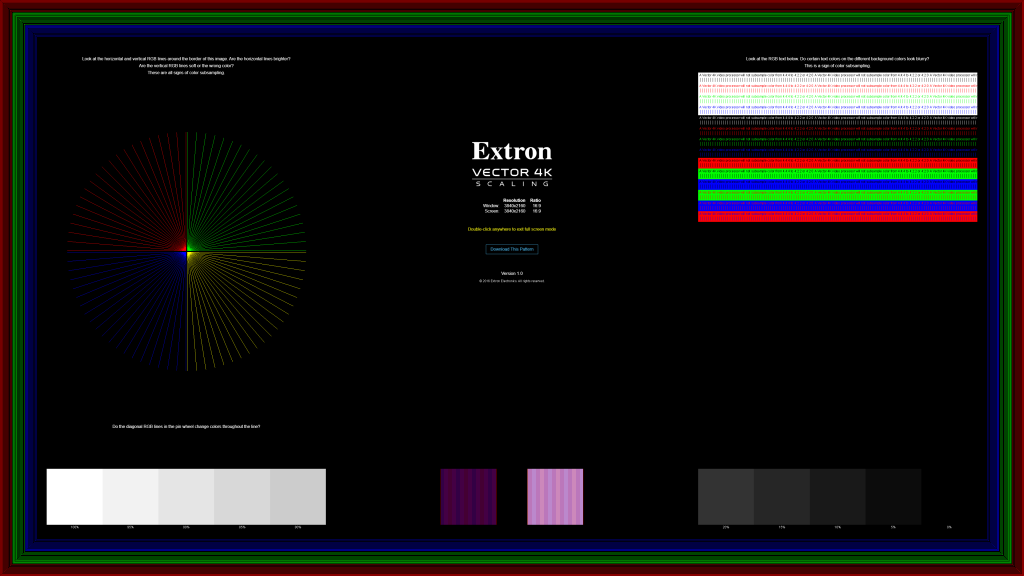 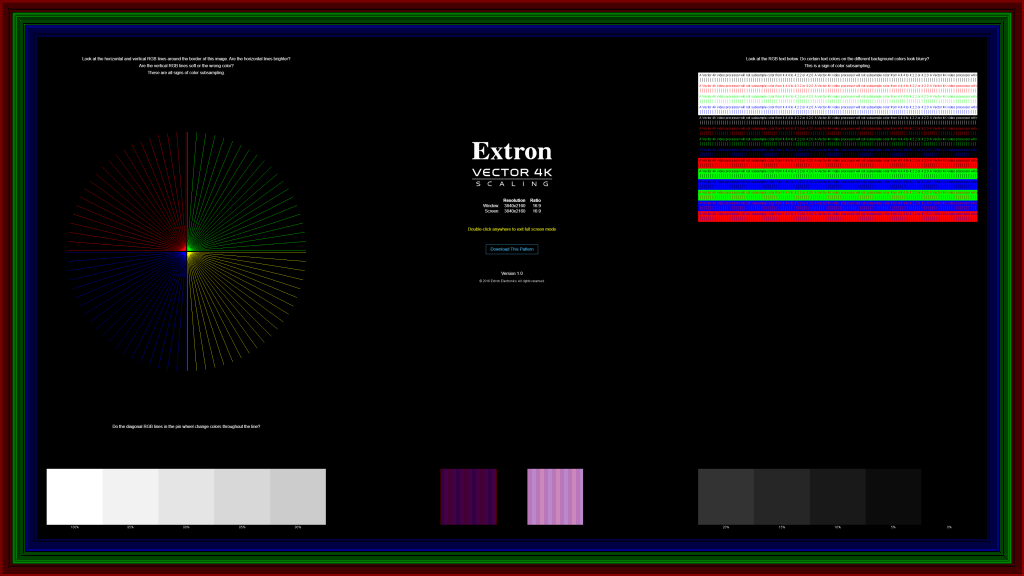 Both have another interesting feature though:  The ability to downscale 4K to 1080p.  With the EZcoo (right), you can turn on the dip switches to convert either, or both to “downscaling” mode.  The Avedio (left) will read the EDID of the target device and if it doesn’t detect a 4K-compatible signal, it will automatically downscale to 1080p:

This is excellent for people who have a 4K TV, but only a 1080p capture card.  One very important thing to note, is they will downscale resolution, but they will not convert HDR to SDR.  That means if you’re using a modern console in 4K, you’ll need to turn off HDR mode if you’re using a 1080p capture card.  Also, the downscaling isn’t perfect:  Do not use the 4K-1080p feature for things like comparison shots, or to “represent a game”, but if you’re just using it as a way to stream your games until you save up for a newer capture card, it’s totally fine: 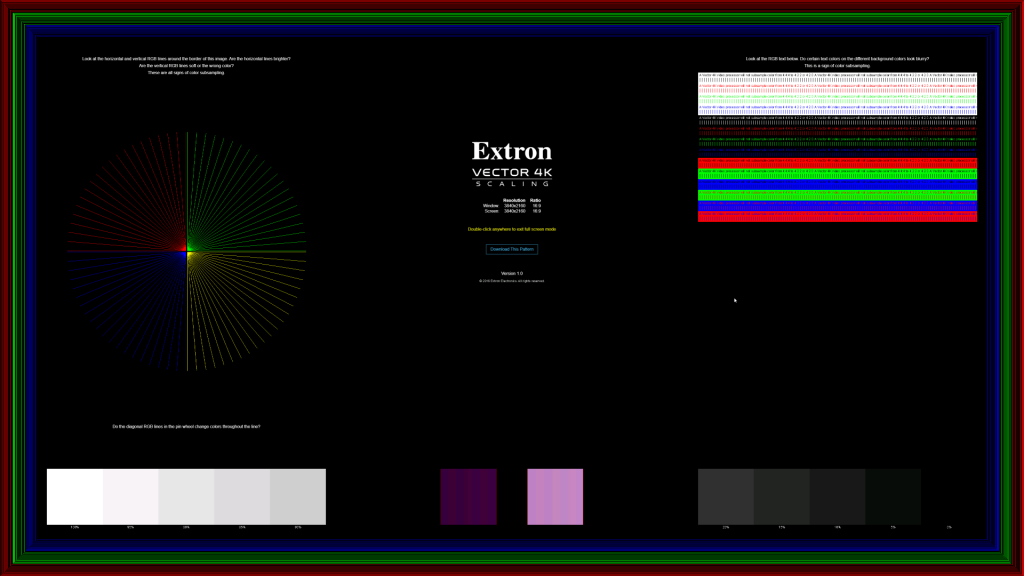 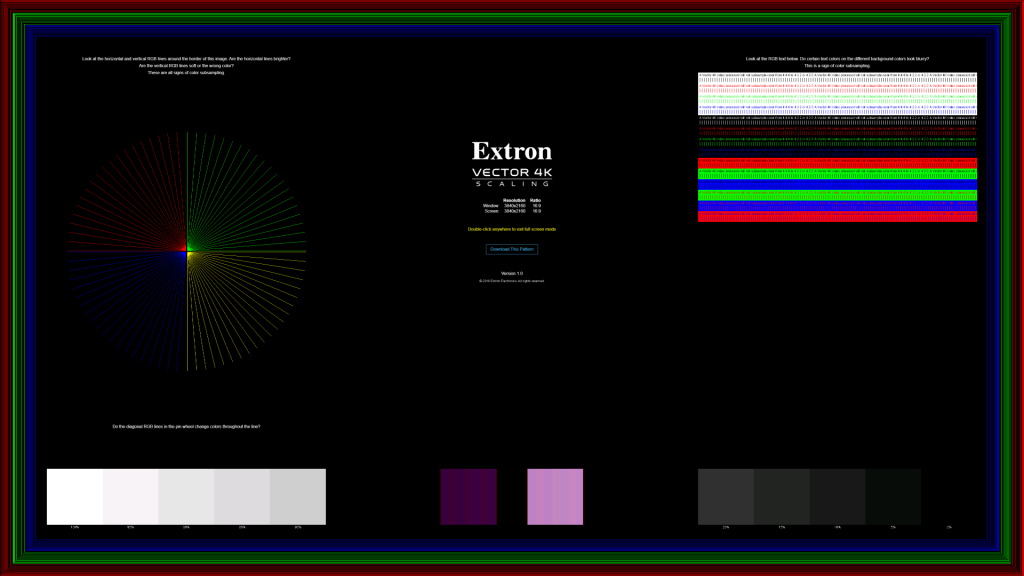 As a note, I measured both splitters with the Time Sleuth in 1080p mode and nether add any lag at all.  That’s zero milliseconds of lag in passthrough mode, so it’s perfectly safe to use with gaming equipment.  I wasn’t able to test lag for 4K to 1080p downscaling (my equipment is packed up), but if you’re using downscaling with a capture card, lag shouldn’t be an issue either way.  If you’re using this device to send 4K to one TV and 1080p to another, you might want to run your own lag test to be sure.  I can’t imagine a common use case for that…but we’re nerds!  I’m sure a few of us will use it like that!

There’s a few more things to note about these two devices.  On the input side, both feature an HDMI input, a MicroUSB power connector and a button to switch the USB power connector into a “firmware update” mode.  The biggest difference is the EDID switch on the Ezcoo box:  When in “Copy1” mode, it will copy the EDID from the display connected to HDMI output #1.  This is probably how the Avedio works as well and for most people, it’s the best setting.  I really like how the EZcoo offers the ability to force a 4K video, 7.1/5.1 audio EDID though, as it might be a help in some scenarios.

Another great feature of these devices, is the ability to connect a PS3’s HDMI output to your capture card!  Both devices currently support this feature and that’s a huge help for many people.  Without this feature, you’ll get an error similar to the Avermedia’s (or just a black screen) when simply powering on your PS3!!!

This is also a help for people with older DVI/HDMI equipment and even for people with displays and projectors that only offer component video inputs, not HDMI:  Combining this with a simple digital to analog converter will allow you to use modern consoles and media players on older equipment – A feature that should never have been taken away from us ;/

Overall, I think both of these splitters are exactly what most gamers would need.  The only question would be if the manual controls are worth it to you.  If not, you can save $10 and get the Avedio.  If you think there’s a chance you might need the manual downscaling control, or forcing 4K EDID modes, get the EZcoo.  I even liked these both better than the HDFury solutions, as they’re just plug-and-play devices with no setup needed at all.  I’m sure there’s a scenario in a professional environment that the HDFury’s detailed control over the signal will be a benefit, but for most gamers, one of these is the better choice….and 1/10th the price.