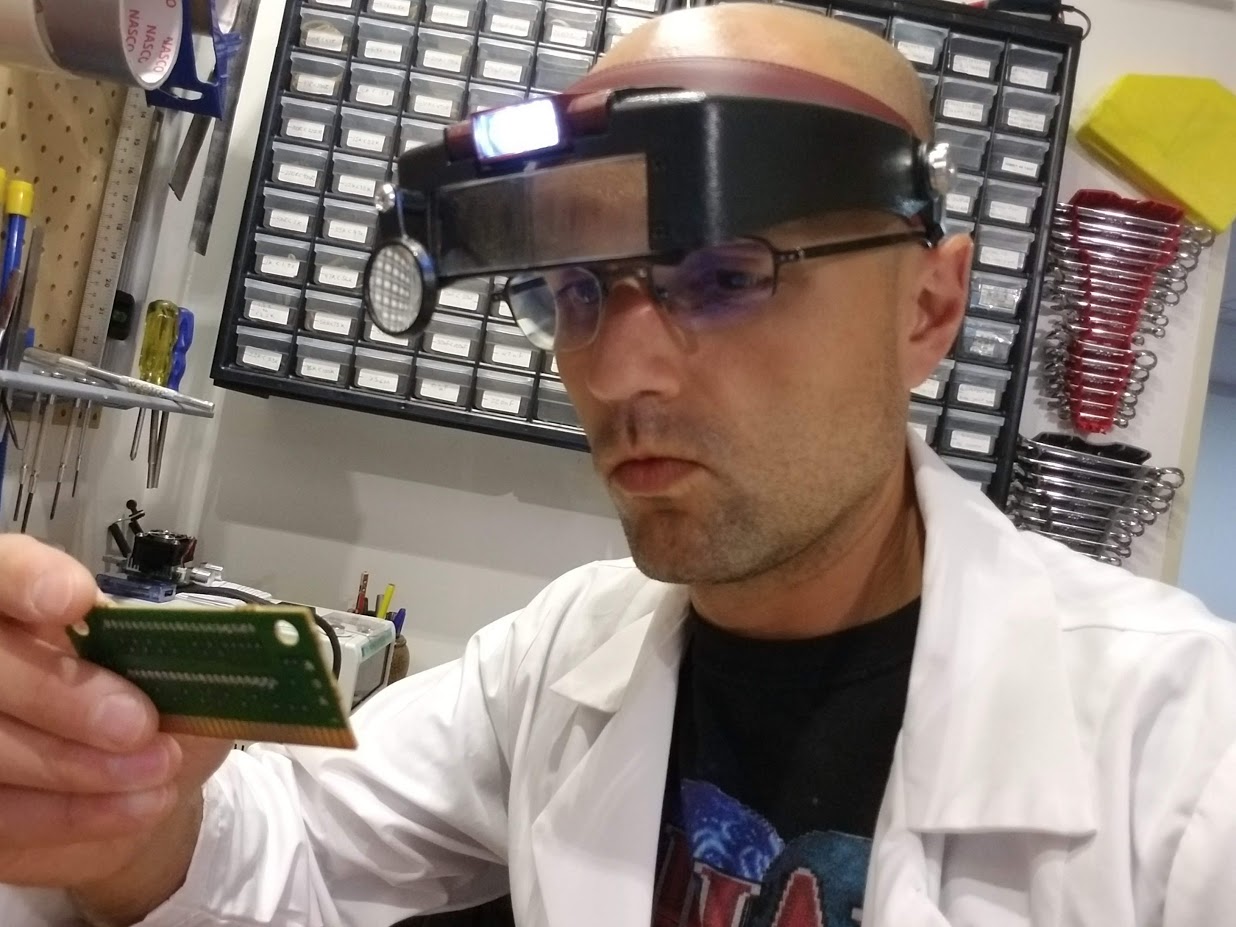 There are many important aspects to consider when assessing the quality of a reproduction or modern release game cartridge. Shell, label, beveled edge, chamfer, surface finish, etc… are all important things to consider. To the untrained eye all PCBs may at first glance appear identical, but after reading this guide you should be able to spot the lower quality designs.

The easiest aspect to evaluate when looking at a game cartridge is its outer shell and label – obviously since these aspects are immediately visible without any dissassembly. The best approach here to evaluate the build quality is to compare a suspect “shitty” cartridge to a known good cartridge. The shell and label quality are mostly aesthetic and don’t carry any potential harm – unless you find bad mechanical designs to be offensive! What I mean to say is that bad shells and labels typically won’t have any measurable negative effects.

Let’s first look at the label. On the left cartridge the label area is both wider and longer than a standard and correct Genesis label. It’s not immediately obvious if you look at it in isolation, but it becomes rather annoying when compared to a proper cartridge on the right. Also, labels with obvious spelling mistakes (“16-BIT GAME CARTRDGE”) are generally regarded as inferior as they speak volumes to the validation and approval process of wherever it came from. To be honest I didn’t notice the spelling mistake until I took this picture! 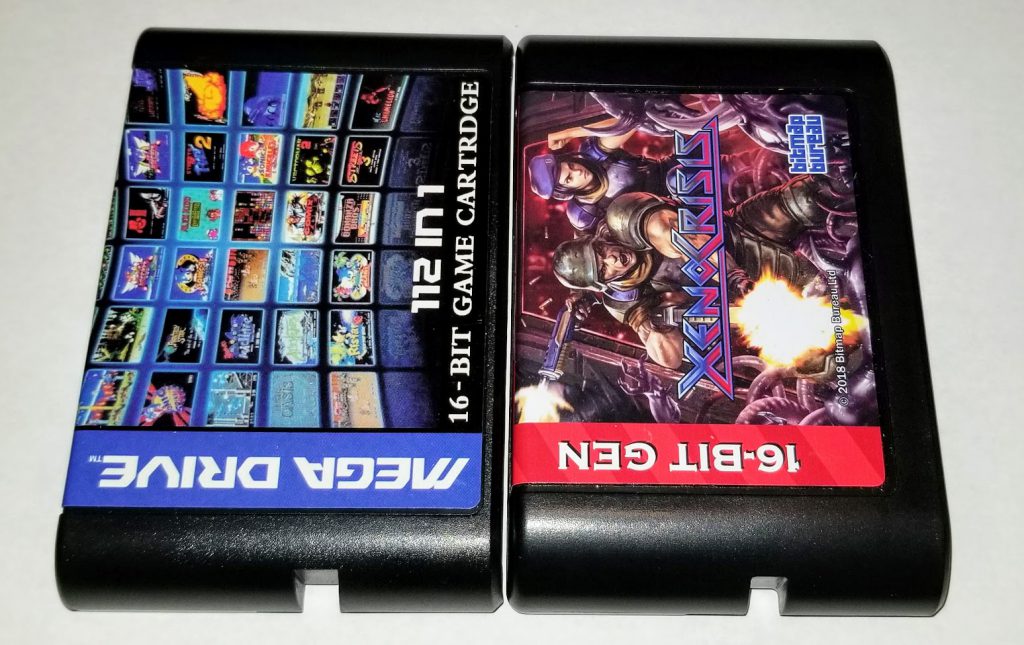 Further analyzing the cartridge shell, notice on the back how this GAME CARTRDGE uses standard Philips screws instead of the usual hex Gamebit found on most cartridges of the era. It’s also lacking the embossed manufacturer’s logo – Bitmap Bureau in this case, whereas standard Genesis cartridges would have the SEGA logo. It’s a small detail that, once noticed, makes the cartridge look a bit more sterile. Also note that the finger groove to pull the cartridge out of the console is much smaller on the GAME CARTRDGE when compared to a proper Genesis shell. This makes the Bitmap Bureau cartridge noticeably easier and more comfortable to pull out of the console. One feature both these cartridge shells do correctly is the Japanese Model 1 notch which makes both cartridges, from a physical standpoint, compatible with all Genesis and Megadrive revisions.

Whether a game cartridge’s PCB edge is beveled or not is very important. A beveled edge reduces the insertion stress on the console’s edge connector. A beveled edge should look like the following diagram, which is the diagram I use to instruct the PCB factory when manufacturing a batch of game catridges. Credit goes to HDRetrovision for this drawing. 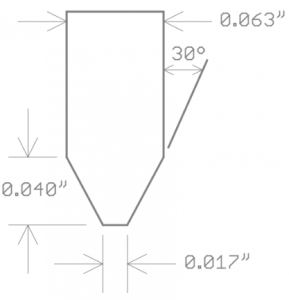 When comparing the shitty GAME CARTRDGE to the proper Bitmap Bureau PCB, the non-beveled edge on the left is clearly visible and poses a minor but real threat to the lifetime of the edge connector inside the console. The PCB on the left is clearly flat and unbeveled. The PCB on the right is magical; designed and spec’d by yours truly! Personally, I would never insert an unbeveled game cartridge into any of my consoles – the additional stress it places on the console’s edge connector and the relative difficulty of replacing said connector is not worth it in my opinion. 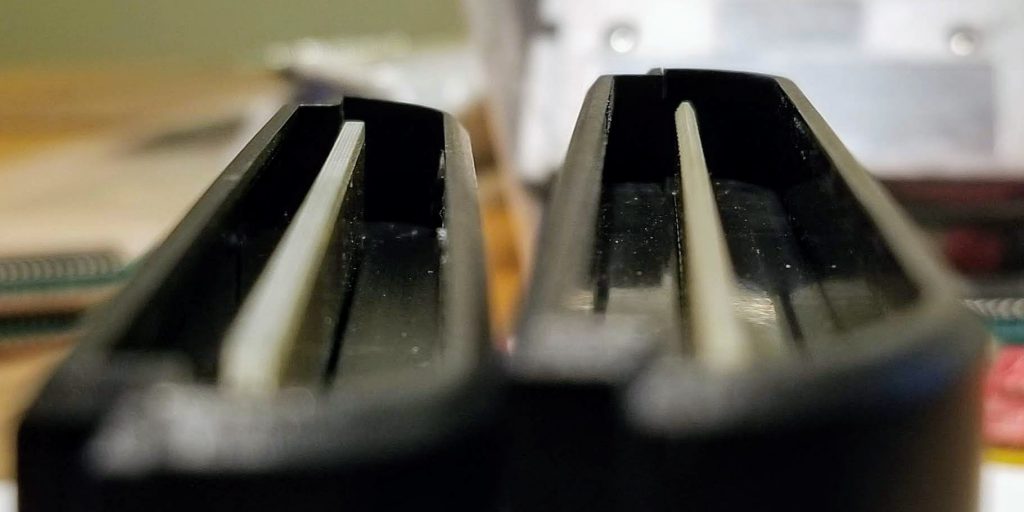 The chamfer on the outer edges of the PCB edge connector helps with the initial insertion of the PCB in the console’s edge connector. It makes the initial alignment a bit more forgiving and tends to further minimize the insertion stress. The chamfer is a 45 degree cutout in the outer edges of the PCB’s edge connector. The chamfer should be clearly visible on both sides of most PCB edges. Note that chamfer is not ubiquitous like a beveled edge – thus I would consider chamfer a “nice to have” feature of a game cartridge PCB. Below, the left PCB has no chamfer, the right PCB has a proper 45 degree chamfer. 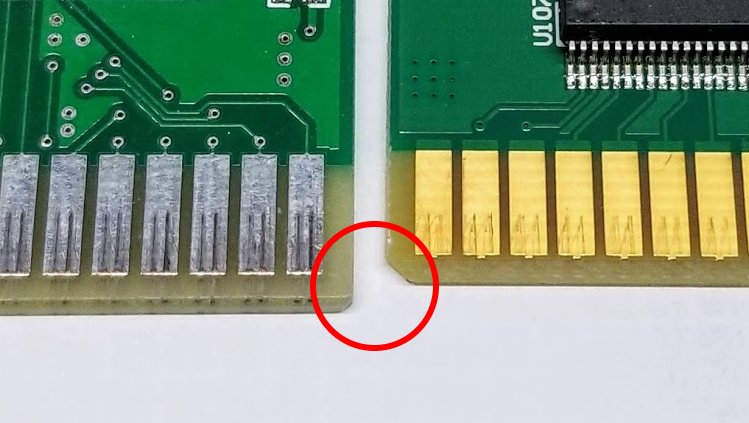 Surface finish for a game cartridge is especially crucial for the edge connection, which is also referred to as gold fingers. Gold fingers are the gold-plated columns that you see along the connecting edges of printed circuit boards. The purpose of gold fingers is to connect a secondary PCB to the motherboard of a computer or game console. Gold Plating is used for the connecting points along a PCB because of the alloy’s superior conductivity and very low chemical reactivity since it does not combine with oxygen or dissolve in most acids.

Hot air surface levelling has the major advantage of usually being the cheapest available finish when ordering PCBs. For this reason, it is a very popular choice for prototypes. HASL finishes are also very easy to rework which is excellent for prototypes. The mechanical strength of the finish however is very poor. Therefore, this type of finish is not well-suited for gold fingers like a game cartridge where the PCB finish is relied upon for mechanical contact with a socket connector.

HASL is easily identifiable by its silverish colour as it is essentially a thin layer of solder applied on top of the copper. Below is a worn out HASL prototype of mine; a Master System game cartridge to be exact. It has cycled an edge connector approximately 500 times – the copper underneath the HASL finger on the bottom edge is exposed and will oxidize (i.e. turn green, like a pennie). While this is “acceptable” for lab prototypes, no one should ever sell you a HASL cartridge, nor should you pay even a single pennie (oxidizes or not) for one. 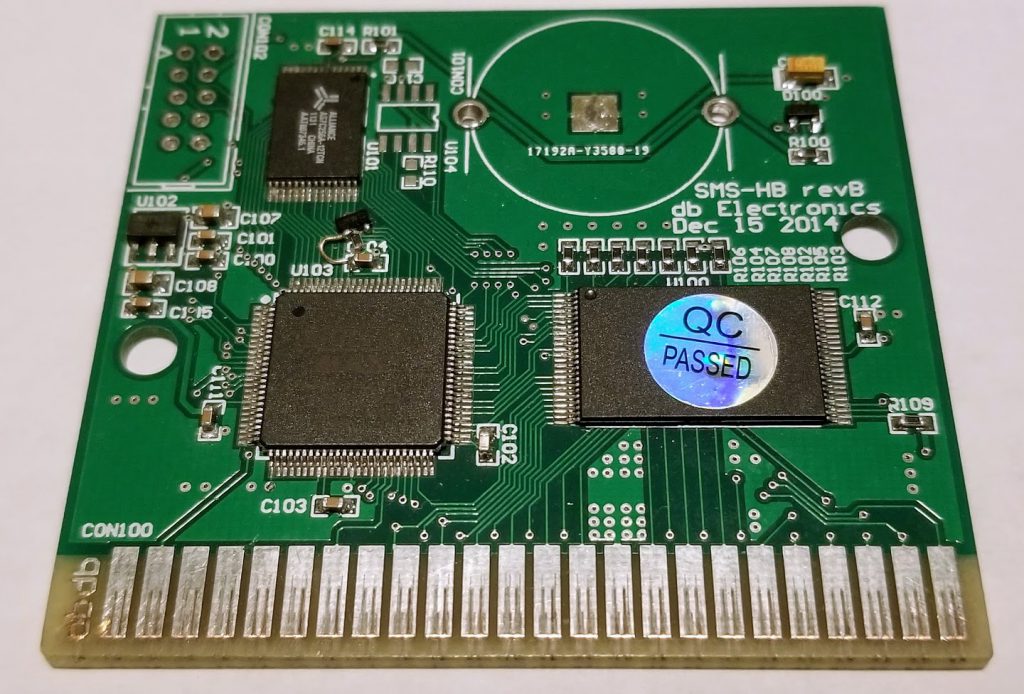 ENIG finishes are used when surface planarity and oxidation resistance are important for the design. Surface planarity is important for PCBs with large BGA packages since ENIG finishes are much flatter than HASL finishes. The thin layer (2-5u”) of immersion gold applied on top of the nickel plating protects against oxidation since gold is one of the least reactive elements. This type of finish, while not ideal for edge connections, is the lesser of two evils when compared to HASL for a game cartridge.

Below, an ENIG board (left) and a HASL (right) board were both subjected to approximately 100 mating cycles in an edge connector. Both the ENIG and HASL finishes show clear surface wear from the mating cycles. However, while the ENIG finish appears to only have changed colours, the HASL finish is clearly being scraped off by the mating connector since it is not strong enough to resist the mating strength. More cycles would completely destroy the HASL finish (as above) and expose the underlying copper to oxidation. 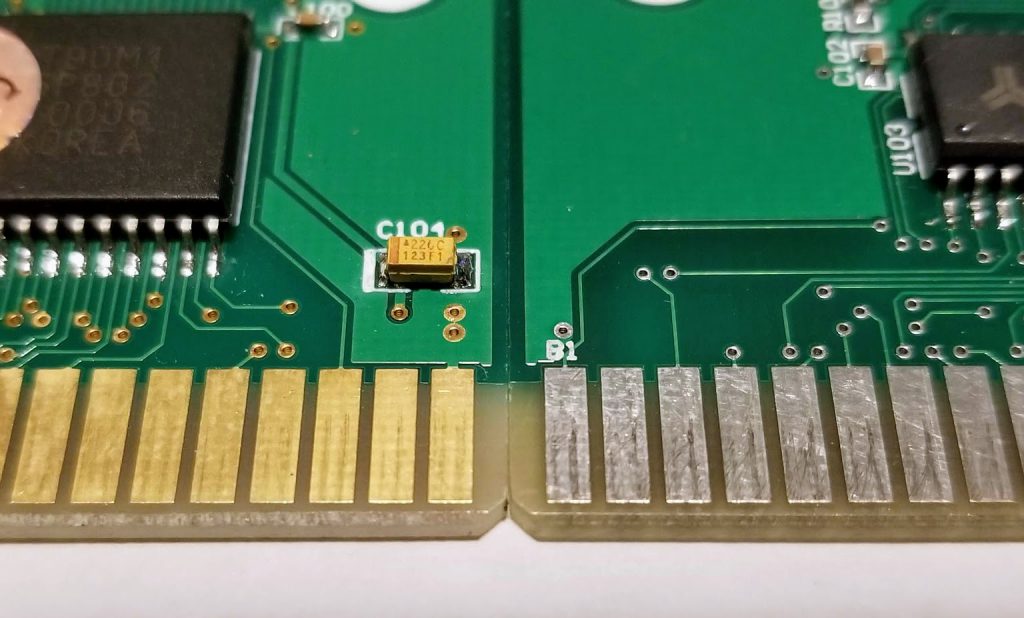 Enig finishes are not thick enough to endure the mechanical stresses of an edge connector. They to, just like the HASL finish, will eventually wear down and expose the copper underneath to oxidation.

Hard Gold finishes are used when a durable surface and protection from oxidation is required. This type of finish is ideal for game cartridge which will be subjected to many mating cycles.

In the picture below, a HASL board (left) and a Hard Gold board (right) which I routinely use for prototyping are pictured. I have no exact numbers but I would estimate that both have been subjected to 500+ mating cycles. The HASL finish is clearly destroyed and a significant portion of the underlying copper is exposed – this board will oxidize. The Hard Gold board’s contacts have some dirt on them but it’s nothing a good scrubbing with some Brasso won’t fix! (that’s a joke btw, don’t use Brasso…) 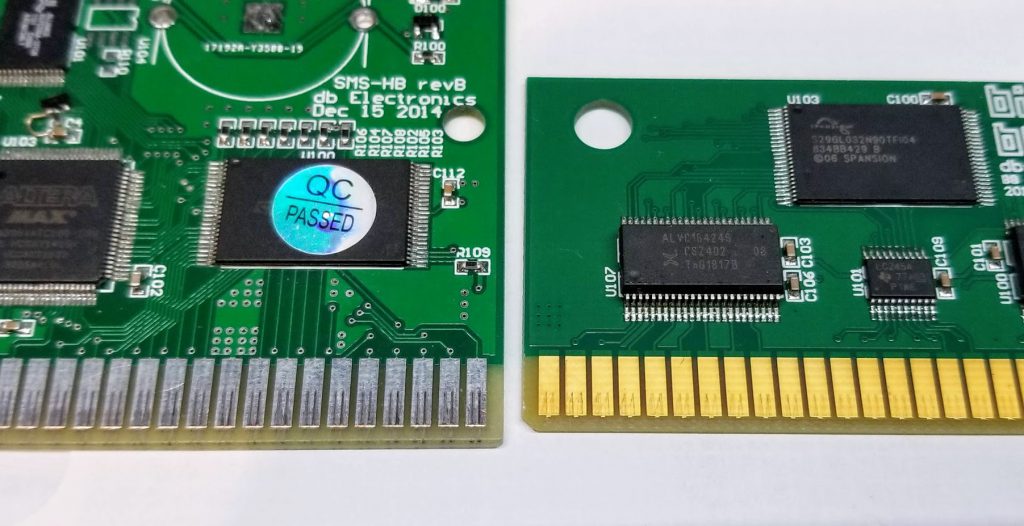 At first glance ENIG and Hard Gold Plating might look identical, but fear not there is a way to identify them which, while not 100% reliable, will certainly help you in most cases. The manufacturing process of Hard Gold requires an additional conductor trace on each finger emanating from the center of the panel. Notice the additional conductor on the PCB on the right at the bottom of each gold finger. Even if this feature isn’t part of PCB design files (gerbers), in my experience most fabrication houses will add this feature in order to make the manufacturing process of Hard Gold possible. As stated before, this identifying feature is not 100% guaranteed to differentiate ENIG and Hard Gold Plating.

Most retro game PCBs from the 80s and 90s I have ever seen have the Hard Gold Finger additional conductor on them. Go ahead and verify this on your game collection! Below is a random SNES cartridge PCB I pulled out with clearly visible Hard Gold conductors.

The first aspects examined, namely the label and cartridge shell, have no negative impact on the actual functionality and potential lifetime of the game cartridge. However, in my experience, GAME CARTRDGEs with poor looks also have poor PCB design choices. Thus, a “shitty” looking game cartridge from outside is more likely to be shitty on the inside as well. As for the PCB aspects; HASL finish PCBs are absolutely not meant to be used as game cartridges. They do however have their place, especially in unexposed PCBs where mechanical connections to the PCB are not required. But, in every case, always ensure the game cartridges you buy, wherever you buy them, are finished with Hard Gold Plating. At the very minimum, refuse to purchase any game cartridges which do not have a gold-coloured surface finish. If ambiguous, ask the seller what finish the PCB has – an informed seller will know and will be happy to tell you! 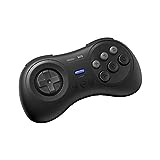 $28.96
A Sega Genesis & Mega Drive inspired bluetooth controller. Compatible with Nintendo Switch, PC, macOS and Android. Bluetooth and rechargeable battery. Turbo Function. Upgradeable firmware.
(as of November 30, 2020 - More infoProduct prices and availability are accurate as of the date/time indicated and are subject to change. Any price and availability information displayed on [relevant Amazon Site(s), as applicable] at the time of purchase will apply to the purchase of this product.) 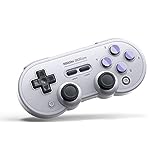 (848)
$47.79
🎮【2019 New Version 】The One Controller to rule them all. Inspired by the classic Super Nintendo. Fully featured Controller: SN30 pro-SN refines every element of its predecessor with new features like clickable joysticks, rumble vibration, motion cont... read more
(as of November 30, 2020 - More infoProduct prices and availability are accurate as of the date/time indicated and are subject to change. Any price and availability information displayed on [relevant Amazon Site(s), as applicable] at the time of purchase will apply to the purchase of this product.) 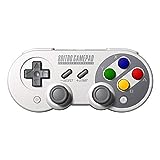 $44.99
Ultra-compatible with Nintendo Switch, Windows, macOS, & Android Rumble vibration, Motion controls, USB-C Wireless Bluetooth and direct USB connectable with built in lithium ion battery D-Input and X-Input functionality Connectivity:Wireless Bluetoot... read more
(as of November 30, 2020 - More infoProduct prices and availability are accurate as of the date/time indicated and are subject to change. Any price and availability information displayed on [relevant Amazon Site(s), as applicable] at the time of purchase will apply to the purchase of this product.)