Tom Happ‘s Axiom Verge 1&2 are amazing “Metroidvania” style, 2D exploration games.  Since that style is often associated with games from the CRT-era, I thought I’d put together a quick guide that shows how to get a fairly accurate CRT look with the game, when using a RetroTINK 5x.  More info below:

First thing’s first:  Axiom Verge 1 & 2 are beautiful looking games and absolutely do not “need” scanlines.  That said, if you prefer a CRT-look for this style game, it may be a cool thing to try.

Next, I’m showing these examples with the RetroTINK 5x, simply because it’s the only scaler on the market today that offers artificial “scanlines” that actually resemble a CRT;  Most are just horizontal black lines across the screen.  If you stumble across this post a few years from now, I’ll bet there will be multiple scalers that can do the same thing, but as of now, the RT5x is the only one and I’m proud to showcase it.  Okay, on with the post…

You’ll want to start by connecting your Switch to a standard flat-panel TV in docked mode.  Then, go into the main Switch settings and change the output resolution to 480p.

Now, you’ll need to configure game to “Exact (black borders)”, then set the RT5x to 1080p (Over) and Generic 16:9.  The 16:9 setting is self-explanatory as this is a widescreen game, but I feel the other settings should have some context:

The resolution of Axiom Verge 1 was 480 x 279 and I assume 2 is the same.  A 3x scale of that resolution is 1440×837 and like with classic consoles, you can apply an integer-scale of that number to retain uniformity and sharpness.  Unlike classic consoles, I think both Axiom Verge games look totally fine when using the game’s built in stretching to 1080p or 720p on a flat panel, however this affects the look of scanlines.  Also, the RT5x’s 1080p (Fill) mode does it’s own stretching, so while setting both to “fill” certainly works, there’s a better option below (click on all pictures for a full-sized view): 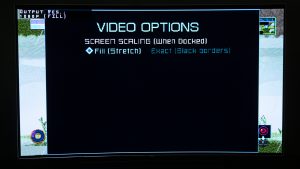 As you can see, setting Axiom Verge to “Exact” mode results in black borders around the screen… 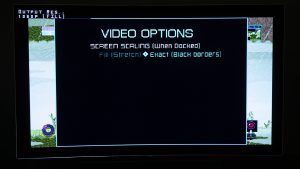 …but when you set the RT5x to 1080p (Over), it zooms the image almost perfectly to fill the screen, while retaining a sharp look: 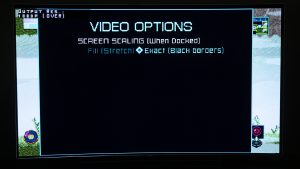 Now you can set your scanlines any way you’d like them.  I prefer the Aperture Grille scanlines, but I suggest trying them all and seeing what works best for your eyes:

The only thing to note, is whenever you’re in The Breach, the games adds its own visual effects.  This didn’t bother me with scanlines enabled, or when I played on a CRT, but I figured I’d make people aware:

…of course, another interesting way to play this game is just by connecting it to a CRT!  That same HDMI to Component Video converter will work on any CRT that supports 480p and you can even use an HDMI to VGA converter for use on a VGA CRT montor.  I was able to test it on my BVM D32, as well as a consumer-grade widescreen CRT and both looked great.  I’ll be honest, as much as I’m a huge fan of using CRT’s both for their look and zero-lag processing, I always loved the way this game looked on all displays.  If you have a CRT that’s 31KHz compatible, definitely try it, but I’m more than happy just using my OLED for this one.

Another very cool trick is to use a second DAC and downscale 480p to 240p!  I went over this in detail in my RT5x launch video, so please reference that for instructions…but playing in widescreen 240p was pretty awesome.  I think this is a rare game that just looks great no matter how you play it;  Each display I tried it on had some small advantage over another, but I don’t think there’s a “best” way to play it and I certainly didn’t find a “bad” way to play.  That said, if you own a RT5x and want to play a brand new game that feels like it would be the best-selling game of 1992, give downscaling a try for a nostalgic feel.  As a note, this can even be done on a 4:3 monitor, as long as it has a 16:9 setting (most PVM’s do) – Basically, any CRT that has component video inputs should work with this dual-DAC downscaling setup.  You can even use an HDMI to VGA converter and an HD15-to-SCART, if you’d like to play in RGB!

Here’s a quick comparison shot I took of my BVM D32 with my GH5, but PLEASE NOTE:  These pictures came out terrible and are not a formal “comparison shot”!!!  The BVM was over-exposed with a heavy moire pattern, making the Trinitron grille almost impossible to see.  Also, neither shot was color-corrected.  I honestly think this is more of a “if you have an RT5x, just give it a shot” kind of post and not a comparison of my BVM vs OLED…but if enough people care about this post, I’ll go back and take both shots correctly:

Overall, I love this game and I just wanted to share another unique way to experience it, for anyone else interested.