On February 10th, 2022, Nightdive Studios released a new remaster of the Sega Saturn and PS1 version of PowerSlave. PowerSlave was originally released back in 1996 for the PC, Sega Saturn, and PS1 and was developed by Lobotomy Software. And while the PC version has been available for years on stores like Steam and GOG, it was the console version that most people see as the better game.

You see, the PC version was made in the Build Engine, an engine that was used in games like Duke Nukem 3D, Shadow Warrior, and Blood. Because of that, the Sega Saturn couldn’t run the PC version. So the developers made a different version of the game in a new custom engine designed for the consoles of the time. And that is the version that Nightdive has chosen to remaster.

However because there were differences between the PS1 and Saturn versions, they didn’t just pick one version of the game to base the remaster on. Instead, they combined aspects of both console versions as a way to offer the best of both versions in one package.

And for the sake of comparison, here are a few screenshots from this new release compared to the Saturn version. Special thanks to John Linneman from Digital Foundry for letting me borrow the Saturn screenshot on the left.

The comparison screenshot that I took from the PC version is using the Subtractive shading mode option which is designed to mimic how the lighting looks on the original Saturn version of the game. However, if you prefer how the PS1 version looks there’s also a shading mode called “modulate” which is designed to match how the shading in the PS1 version looks.

This version also has a highly customizable CRT filter with an optional shadow mask effect that you can enable which I personally like the look of. 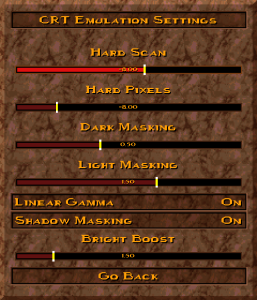 If you want more of an in-depth look at this remaster, John Linneman and Alex Battaglia made a great video talking about this version on Digital Foundry, which you can watch here.

And on the topic of the remaster itself, while I can speak for the original versions since I haven’t played those, this new version of the game meets Nightdive’s quality bar that they have established with all their previous works over the years. If you’re familiar with their other remasters, you will not be disappointed.

I love this game, a lot. I’m so happy that PowerSlave finally got a re-release from Nightdive because for the longest time if you wanted to play the console version, you’d either have to get the original hardware with a copy of the game, hunt down a copy of Kaiser’s PowerSlave EX, an early unofficial Kex engine port of the PS1 version that wasn’t finished, or emulate the game. And if you went down that route, you would likely have played the more cut-down PS1 version. Because PS1 emulation is still a lot easier to get into than Saturn emulation. So the fact that there’s an easy way to play this game now makes me really happy.