As an Oculus Quest VR headset owner, I was shocked to receive an email informing that my headset would soon become useless without a FaceBook account. Having made purchases on the Oculus Store, it felt like robbery, since these titles would no longer be accessible. No warning was given of such a move when the units were being marketed, nor when purchases were made. I am a long-time outspoken critic of FaceBook. I have never had, nor ever will have, an account there due to privacy concerns.

We’re reaching out to let you know about upcoming changes to the Oculus platform. On October 11, 2020, we are updating the Oculus Terms of Service and Privacy Policy to reflect that Facebook, Inc. will become responsible for the Oculus platform and your Oculus information…For example, we explain how we collect information about your physical features and dimensions, such as your estimated hand size when you enable hand tracking.

The new Oculus/FaceBook terms of service employ deceptive tactics—for example, they have complete access to your “body information” but claim to merely use the data for benign purposes like “estimating your hand size”. I find it hard to believe that if I granted them permission to record my voice with an always-on headset, that a company like FaceBook is only interested in the size of my hands… Clearly it will be recording non-VR related conversations, tracking eye movements, social interactions, recording video from its 5 cameras, and so on. You couldn’t ask for a better suite of spying hardware. 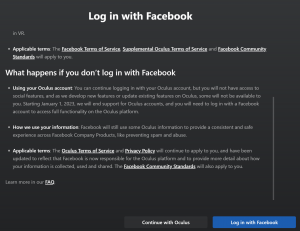 A screen that met me when logging into the Quest recently

The new Quest 2 makes matters even worse, requiring a FaceBook account “in good standing” to even function. Deleting or losing your FB accounts means permanently losing your Oculus account and all purchases. FaceBook has explicitly stated that there are no refunds nor means for rebuttable. Account bans on FaceBook are final and irreversible. Bad behavior, a simple mistake, poor etiquette, or being cancelled on FaceBook means losing your VR. Linking two Quests to a single FaceBook account also results in a ban, and creating fake accounts is also forbidden, and they do investigate attempts to do so.

Luckily, a Reddit user has successfully jailbroken (AKA rooted) the Quest 2, a feat that was independently verified by the XR Safety Initiative, an organization that advocates for safe virtual environments.

Although the jailbreak hasn’t been made public yet, the achievement is a win for advocates of online privacy, and for people who feel like the victims of a profoundly unethical bait-and-switch maneuver. The jailbreaking initiative is being funded by community bounties, including large offerings from Oculus founder Palmer Luckey, and Robert Long of Mozilla. When Oculus’s own founder is sticking it in the eye of FaceBook, it speaks volumes about how far the platform has fallen.

If you are a Quest owner and refuse to upgrade due to the FaceBook requirement, fear not—several companies are launching new headsets in 2021 that will eat the Quest 2 for breakfast, most notably HP with their incredibly-specced Reverb G2.

It's $200 more but you get the world for it. Upgrade=Path pic.twitter.com/rGGNz6ZYM4