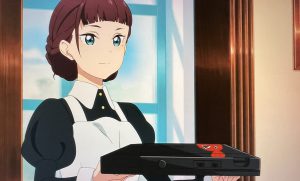 In today’s segment for “develpments I did not expect”, it seems the modern anime industry has fallen in love with classic SEGA, or at the very least, it has according to St1ka (that’s me).

Long story short, modern anime shows have been showing cameos of classic SEGA consoles left and right during the last few years, and this trend only seems to be getting stronger if recent shows like Hi-score Girl and Isekai Ojisan are anything to go by.

These can include quick cameos where you can catch a glimpse of the console, to full blown anime shows centered around SEGA. In fact, I’ve even counted how many anime shows represented classic SEGA, Nintendo and Sony and discovered that SEGA received twice as much as love as Nintendo and Sony combined. You might think these are SEGA-sponsored shows or that SEGA had a hand in them, but there’s nothing to indicate that, simply put, this is a new trend that is happening organically.

So if you want to see Snake Demonesses buying The Punisher for the Sega Genesis, anime maids serving the Master System on a platter, or a middle-aged Japanese man saving the world with the power of SEGA, I recommend you check out my newest video: