PlayStation 2 consoles output both Component Video (YPbPr) and RGB.  Both are equal in quality, but component video is easier to use in all resolutions with the PS2.  More info below:

HD Retrovision Component Video Cable – The best component cable you can buy for your PS2 or 3!

HDMI Cables:  At the moment, no plug-and-play HDMI cable supports all resolutions from the PS2.  In almost all cases, if you’re gaming on a flat-panel, it’s best to just use a component video cable and scaler (links below).

Overall, using a quality set of component video cables will be the best solution for most people.  There’s only a few very specific scenario’s I’d recommend using RGB SCART with the PS2:

– You’re going directly into a display or processor that doesn’t accept component video.

– If you’re setup is 100% RGB SCART, it might be functionally easier to use a SCART cable.

Using RGB SCART makes things complicated if you play games that are 480p; More on this below in the “sync on green” section.

Deepening on your setup, you can even run component video through an RGB SCART cable, by simply switching video modes in the menu.  This would only be beneficial if you have target devices that can accept both RGB and YPbPr over their SCART inputs.

– If your CRT only supports 15KHz signals (240p and 480i), use whichever cable is easiest; both will look the same.

– If you like to play light gun games, you can try to find something like an SCPH-1160 to break out composite video, then send component through to your cables.  Alternatively, the RGB SCART cables linked above have a composite video breakout on it, which might be easier for your overall setup. 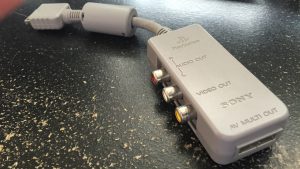 When the PlayStation 2 is set to RGB output (not component), it outputs standard RGB with sync over the composite video or luma line in 240p/480i modes.  Once the console switches to 480p output, the signal changes to RGsB, or “sync on green”;  In this mode, the sync signal is sent over the green color line and nothing is outputted from cvbs or luma.  If you’re not familiar with these “sync” terms, I suggest reading though the sync page.

There are a few ways to use RGsB and there’s a chance you already have equipment that supports it!:

Devices like the OSSC will accept RGsB from a PS2, simply by switching the input after 480p mode is selected (or set the OSSC to auto scan the inputs).  That’s it, nothing crazy, just toggle inputs based on 480i or 480p.

The latest version of the gscartsw will automatically convert RGsB to RGBs when it’s in 480p mode.  That means simply plugging in an RGB SCART cable will get your RGBs in all resolutions – Just make sure to toggle the correct jumpers when setting up the gscartsw.

Some 480p capable RGB monitors can accept a RGsB signal, simply by toggling the external sync button off when RGsB is enabled.  Many (if not all) Sony monitors that support 480p have this option.

Extron Rxi boxes will automatically convert RGsB to either RGBs or RGBHV, without any intervention at all.  In most cases, you’d just add this as the last piece of equipment before your display.  This can be pretty complicated and confusing, so I’d suggest this as an expert option.

Even if your flat-panel TV has component video inputs, I strongly recommend using a scaler to connect your PS2.  This is because every TV I’ve tested has more lag through the analog video inputs than the HDMI input.  Also, your TV’s built-in deinterlacer will most likely add a ton of lag to 480i games, even when in “game mode”.  These scalers can fix that:

RetroTINK 5x – The RetroTINK 5x can accept all resolutions through it’s component video port, but 480p isn’t supported over the SCART input from the PS2, due to the RGsB output.  It also is able to motion adaptive deinterlace all PS2 480i games, as well as do an excellent job scaling 240p and 480p!

GBS-Control – The GBSc can accept all the PS2’s resolutions over the component video input and also supports motion adaptive deinterlacing.  It’s a DIY solution, but excellent for PS2 users on a budget.

Open Source Scan Converter – The OSSC will accept all resolutions from any of the above cables.

RetroTINK 2x M – Combining the component video cables linked above with the TINK-M will allow use of all the PS2’s resolutions, with optional scanlines and deinterlacing of 480i.

This is completely useless in most setups.  BUT:

Experts can modify their PlayStation 2 to always output RGBs in all resolutions.  While using the above methods is much easier (especially just using component video), this solution is available if you absolutely need it (people using Extron Crosspoint switches into an RGB-only target device?).  Some models can even be modded for RGBs and still retain component video output, however most will lose component video support, as well as composite and luma.

In my testing, there isn’t a “best” model PS2 to use, as all seem to output the same quality video and audio.  There’s talk that some models are more reliable than others, but overall there’s only a few models to outright avoid, all “slim” models:

SCPH-9000X models are know to have performance, reliability and compatibility issues and should probably be avoided.  They are easily identified by having an integrated power supply, instead of an external one.
SCPH-7500X & SCPH-7700X have some issues with both PS1 and PS2 games, but aren’t as bad as the 9000x.

In most cases, PS1 discs can be run on a PS2 and perform identically.  I’ll list the few shortcomings below, but for the most part, it’s exactly like playing the games on a PS1.

Some PS1 games have glitches when played on a PS2.  Also, the later model PS2 Slim’s listed above replaced some of the PS1-compatible hardware with software emulation and should be avoided for PS1 use.  Here’s a list of games with compatibility issues:  http://en.m.wikipedia.org/wiki/List_of_PlayStation_games_incompatible_with_PlayStation_2

So, once again, to be 100% clear:  PS1 games run at the exact same resolution on both a PS1 and a PS2, regardless if you’re using composite, S-Video, RGB or component video.  Light gun games also work perfectly.  Please ignore all rumors that say otherwise and don’t forget that forums are always filled with misinformation.

There are over 100 PlayStation 2 games that offered 480p support, however some games make it quite tricky to access these modes.  If your PS2 is chipped or softmodded, you can use the GSM Selector to try and force a game to output all possible PS2 video modes:  240p, 480i, 480p, 720p, 1080i.  Results may vary and some games won’t work at all, unless played in their original mode.

One thing to note:  There are a few games that support 1080i, but that’s almost never a good resolution to use.  First and foremost, interlaced resolutions are always a bit flickery and soft compared to progressive scan.  Also, flat-screen TV’s will almost always be much laggier with interlaced sources.  It’s my opinion that unless you’re using a CRT that supports 1080i, you shouldn’t even consider it as an option…and even with a CRT, I’d only consider 1080i if 480p or 720p wasn’t available.

Some PlayStation 2 games – most notably “classic” software collections – will run in 240p, giving it the look of older consoles.  Some people have complied a list of those games, just for reference:

I’ve seen some people mod their PS2’s to output VGA (specifically motherboards older then GH-015.  It’s my opinion that using good quality component video cables and a component to VGA converter will achieve the same exact thing, but if you’re interested, check out the links below:
http://gamesx.com/wiki/doku.php?id=av:playstation_2_rgb_sync
http://nfggames.com/forum2/index.php?topic=4337.0