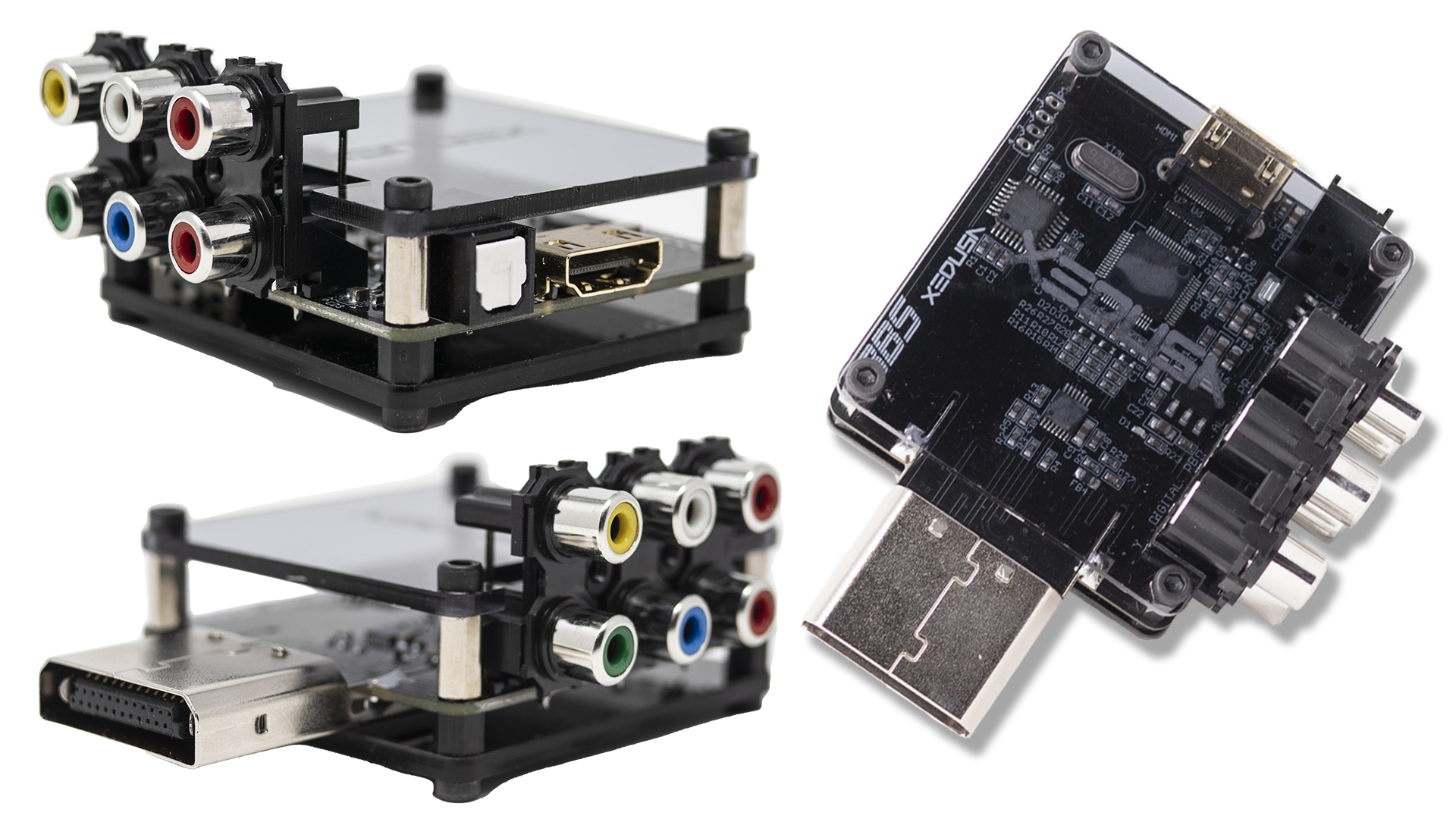 I recently had the chance to test the Xedusa adapter for the original Xbox:  A device that allows for simultaneous component video and HDMI output, as well as analog and (true) digital audio.  It performed okay, with the output a little dim on the unit I received.  After turning the brightness up on my TV, it looked good though.  If you’re looking for a compact, dual-output solution, this is the only one available for the original Xbox;  You can accomplish that with multiple other choices, but not one box.  I recommend scrolling through the Xbox page to see which solution is overall the best fit:

The first thing I noticed about the Xedusa, is it doesn’t have any feet to reduce pressure from the A/V connector.  Now, that’s a big connector and it would take a lot more strain to harm the plug than something like a SNES, but I’d suggest putting something underneath, or adding some rubber feet:

Next, I wanted to compare it to the current reining champion of plug & play Xbox solutions:  The Chimeric adapter.  While the Xedusa didn’t have any of the interference issues you’ll find in those cheap, crappy HDMI cables, it was noticeably dimmer.  As a note, I double checked this on a scope and the dimness is not a result of the dual output – It seems safe to have both outputs connected at once.  Just turning the brightness up on your TV should fix the issue, but hopefully they’ll fix this in future revisions (click for full-sized).

I also tested every resolution the original Xbox supports and all were passed without issue.  I tried to demo this in a disastrous livestream where just about everything that wasn’t the Xedusa failed…but the Xedusa never dropped audio or video. Other than the brightness issue, it seems like both the analog and analog-to-digital conversion on the HDMI side work well.

Also, both the SPDIF and HDMI output have audio that was generated digitally – It’s not an analog-to-digital audio conversion like some of the cheaper plug and play cables.

At the moment, I’d choose the Xedusa if the form-factor is something you think would improve your setup – If a small, single device with dual analog and digital output would help you out this is by far the cheapest option.  If you just want a plug and play HDMI solution, the Chimeric seems a bit better…but it’s been out of stock for a year.

Check out these original videos for more comparisons between a few plug and play adapters, as well as a true digital-to-digital HDMI solution that’s installed internally: