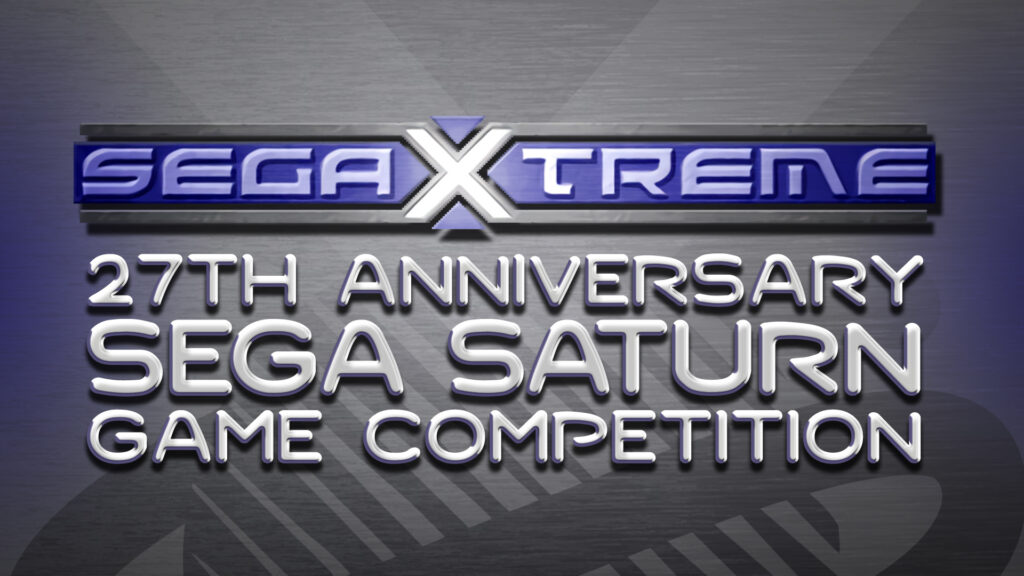 As another year passes and we close the book on 2021, we are absolutely psyched for the SEGA Saturn 27th Anniversary Game Competition, organized by Emerald Nova and hosted by the fine folks at SegaXtreme!

While this contest celebrates 27 years of Sega Saturn, it actually marks the third in a series of annual contests that started back in 2019 (in celebration of Saturn’s 25th anniversary).

A contest intended to encourage and build interest in Saturn homebrew development and help grow a community around that interest, this annual game competition has certainly succeeded in it’s goal so far… Here’s a look back, recapping the entries we’ve seen from the last two years and showing just how much this annual event (and this community) has grown…

These previous efforts have inspired many to dip their proverbial toe into Saturn development, and many have been encouraged by the availability of helpful tools, such as Johannes Fetz’s Jo Engine and helpful community members, such as XL2, Knight0fDragon, Ponut, VBT and many others.

That brings us to this year’s competition, which just might be the greatest on record… Over the past year we’ve seen teams formed, patches released, exciting project updates and several impressive proofs of concept that combine to show just how much the Sega Saturn hacks & homebrew scene is really heating up!

Here, we’ll document and showcase this year’s entries in alphabetical order by name of each participant. For a detailed breakdown of the contest rules, judges and criteria, check out Emerald’s Game Competition Page. 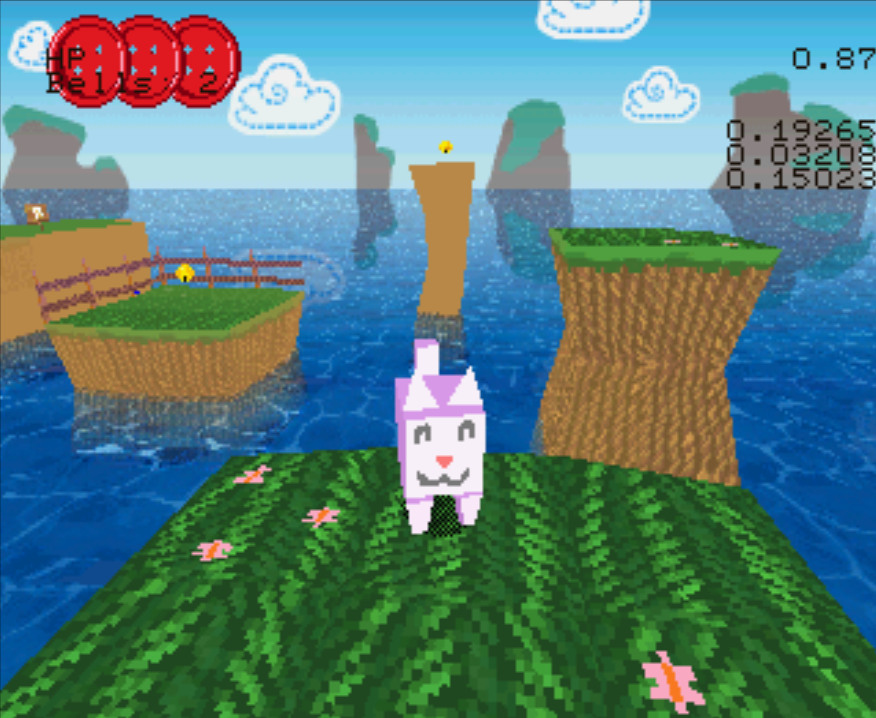 Kriss Mingle – v0.1
An expansion on last year’s entry with certain issues fixed, Kriss Mingle is a Mall Santa dating sim. This iteration consists of 2 in-game days. Not all assets are complete, but it does progress the story a bit further over last year. 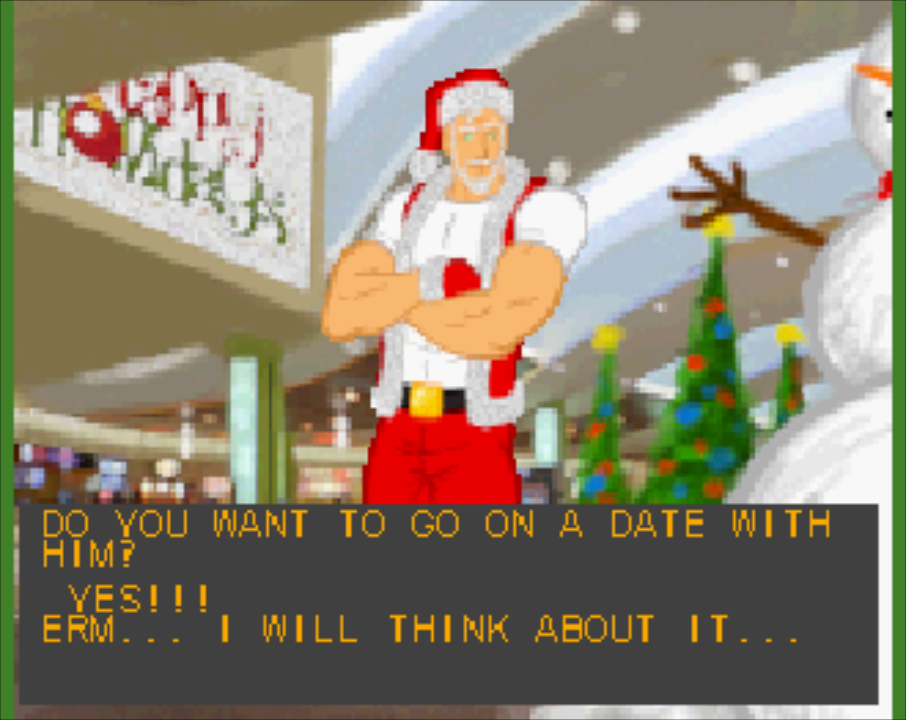 FLY vs FLY
In this insect-themed 1 on 1 fighter, it’s all about shooting down your opponent or knocking them out of the sky. Easy pick-up-and-play game mechanics make for a quick and fun 2 player gaming experience. 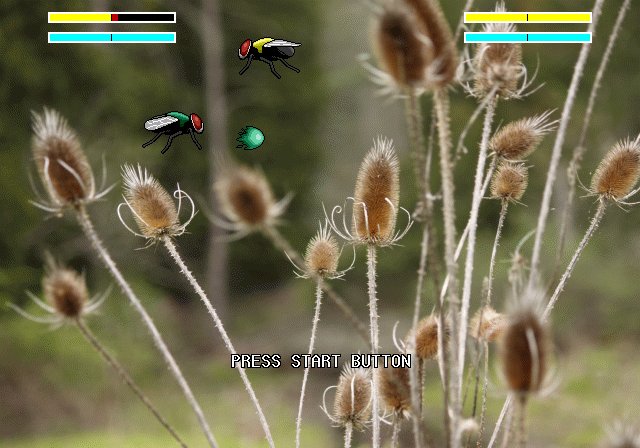 Sartist
Sartist is a painting game for the Saturn. While inspired by paint programs like Mario Paint, it uses the Saturn’s processing power to include features beyond it and others of the same period. 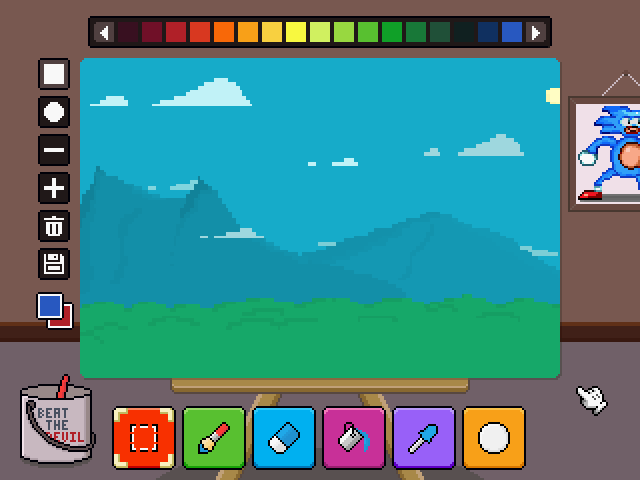 15Xtreme
You know what’s wrong with this contest? Not enough ponies! Here we have 250 art pieces that have been carefully fished from the waves of Derpibooru, vetted and placed into the off-topic channel over the past 6 months. Now you can enjoy them in a twist on the classic 15 tile puzzle game on your Sega Saturn! 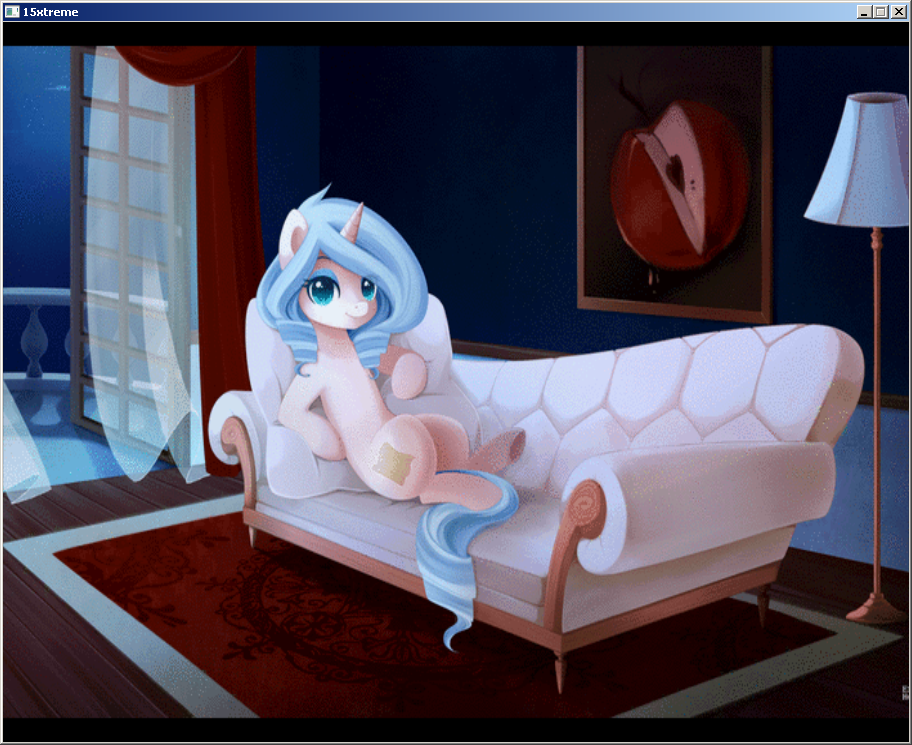 The Everlasting Summer (Port)
In this Saturn port of the Russian visual novel for PC, The Everlasting Summer, you are Semyon, an ordinary young man who falls asleep on a bus in the middle of winter only to wake in the midst of summer at a pioneer camp from his youth. As you become acquainted with the local residents, you’ll navigate a complex labyrinth of human relationships and solve the camp’s mysteries. But how will you get back? *This entry is apparently unplayable in its current state.

ZYGO
In this new 2D platformer, you collect gems to unlock levels (only 2 in this demo). After defeating the bosses, you gain the ability to transform into a new creature for a short time (spider or bat so far) by collecting powerups. This transformation enables you to climb walls & get through small gaps or fly to reach new areas in each level.

The Garfield Master
Can you survive an onslaught of 1,000 pieces in this Tetris-inspired action/puzzle game featuring everyone’s favorite cat?

The Lighthouse of São Bento do Oeste
This visual novel/adventure follows the character of Renne Bras, a private detective who travels to the small town of São Bento do Oeste to investigate the mysterious disappearance of a couple at the city’s lighthouse. Here is a link to the game’s official webpage.

Red Moon: Lost Days (Demo)
In this visual novel you are Kyou Tan Wa of Chukou, General & leader of the Kyou Army and daughter of Shin Tan Wa and Rei. After losing contact with an old friend and army general, you set out on a journey to Egypt to investigate his disappearance.

Balloonatics – v0.90
In the same spirit as last year’s Flicky’s Flock, Slinga brings us a ( 12 !? ) player multi-tap game that is fun and addictive as hell! 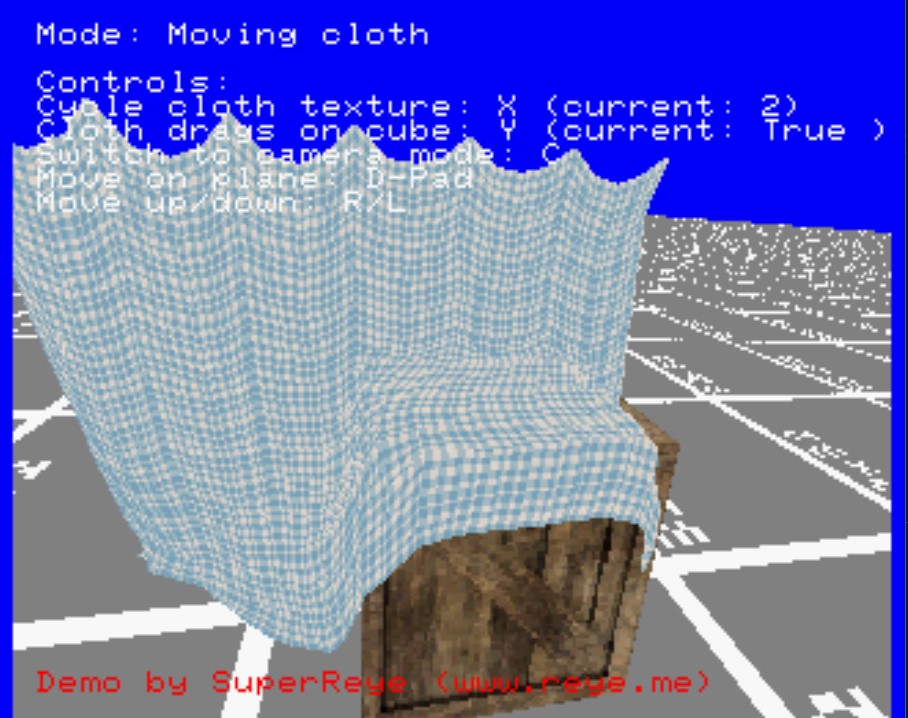 Sky Blaster
In this simple endless mode SHMUP, enemies drop items upon death (either gun upgrades -3 levels starting with a level 1 gun-, extra lives or extra bombs). You can carry up to 9 lives and 9 bombs. The game also supports use of the 3D control pad for those that prefer to maneuver their ship with the analog stick. *(Special thanks to Random for music, AnriFox for cloud art and Ponut64 for PoneSound). 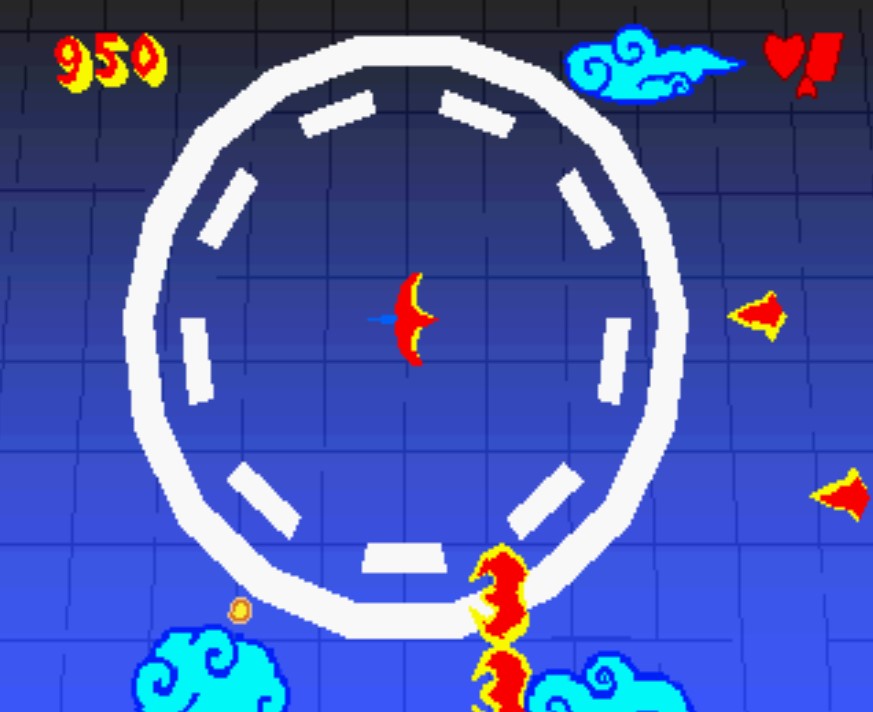 Blue Skies
This original game title channels the spirit of games like Pilotwings, to bring a calm and relaxed flight simulation experience to the Saturn. Fly around an archipelago in five courses to test your piloting skills. Avoid crashing into the water or the islands while improving your course time. Fly through a yellow waypoint to start a flight course. 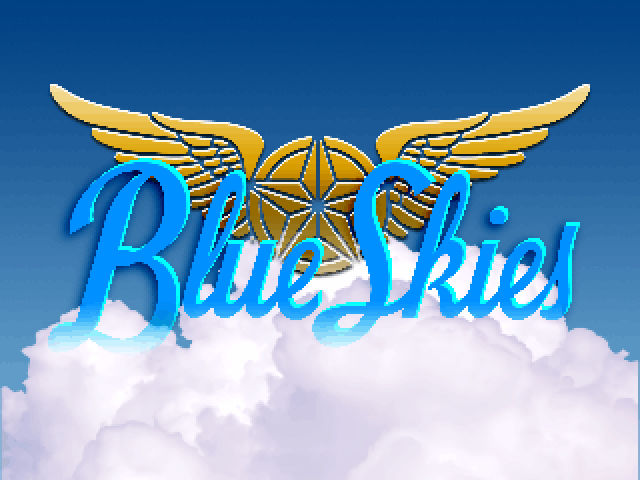 Final Fantasy – Demo
This is a continuation of porting Final Fantasy. This year it you now have the ability to create your own party, encounter battles, and even fight or run. Currently only the FIGHT and RUN commands are implemented. Characters start with basic gear already equipped. There is no way to heal though, so you will simply be able to wander around and fight until you get a game over. 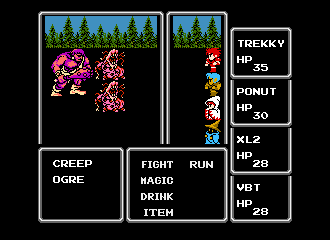 HELLSLAVE – Update Demo 0.35
This demo update is ALL about deathmatch, with up to 4 players in split-screen and up to 7 bots (you can mix things up) on 8 maps. It also features environment mapping on select weapons and updates to some of the old maps. (thanks to Josh 7774 for 2 of them). 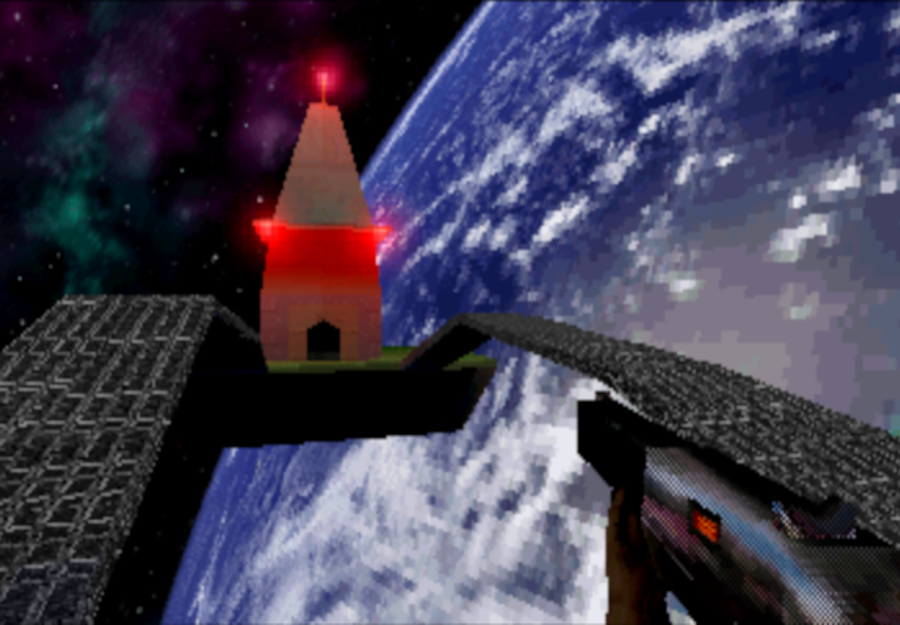 A Murder of Crows & Shadow Mask

Deathmask (Angel Devoid) “DeTranslation”
This “De-Translation” or “Un-Dub” takes the English dialog from the original MS-DOS game, “Angel Devoid: Face of the Enemy”, and inserts it into the Japanese Saturn port of the game, DeathMask. This replaces all overdubbed Japanese dialog, restoring the true original voices of each on screen actor, making the game playable for English speaking Saturn fans. *This project is almost 100% complete, aside from a few inventory descriptions that were added to the Saturn version of the game, which had no original English audio.

Bulk Slash English Localization & Fandub
This complete English localization and fandub of the Japanese Saturn exclusive, Bulk Slash, features a total of 20 different English voice actors, 7 fully voiced “MISS” navigators, full English text and Twin Stick support! Created by a team of passionate Saturn fans and community members, it makes for one of the most ambitious and polished fan projects that the Saturn has seen thus far.

Gungriffon II English Localization – Preview Alpha 0.01
This project has its origins in early 2019 when my coding-illiterate self tried making headway for the first time. Since then, and with the excellent knowledge provided by Knight, implementation of the patch has truly begun. While we may still be in our infancy, this project has passionate and knowledgeable members willing to see it to completion by the end of 2022!

Wachenröder (English Localization)
Intended as a “Christmas present to the Saturn community”, this localization is based on the famous translation guide by Glenn A. Rudy III and Yumi Makita, couple that met and married through their work translating this game together. Due to the text character compression scheme in use, this project presents a high level of difficulty to patch, which certainly adds to the impressive nature of this project, beyond the overall outpouring of community demand for this translation. 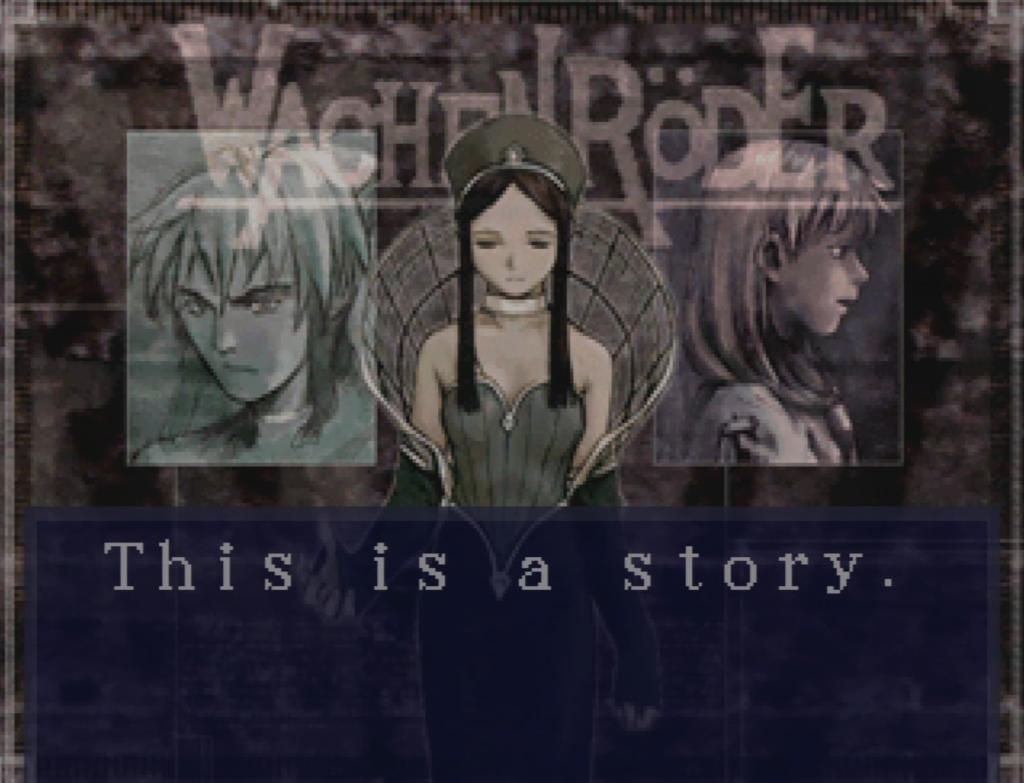 FirePro S Six Men Scramble (English Translation) – 2021 UPDATE
This is an updated submission of last year’s translation project. There have been a significant number of elements translated since the 2020 submission, however, the project remains as of yet unfinished. 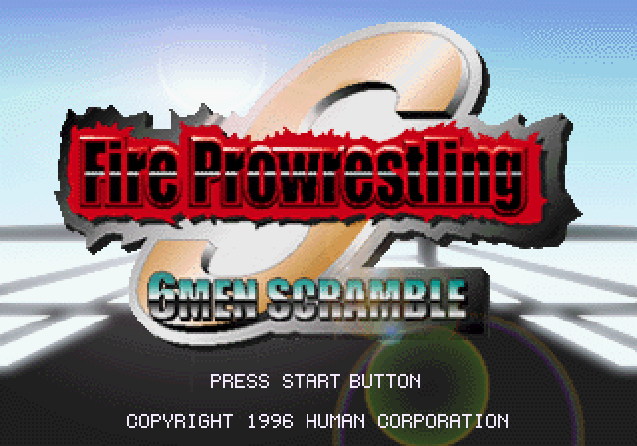 Fire Pro Gaiden: Blazing Tornado (English Localization)
All main menu text translation has been completed: Circuit Mode (aka Arcade/Story mode). The Japanese text is a bit wordy, so this as an abridged English localization rather than a direct transliteration. *This Project is Still in Progress 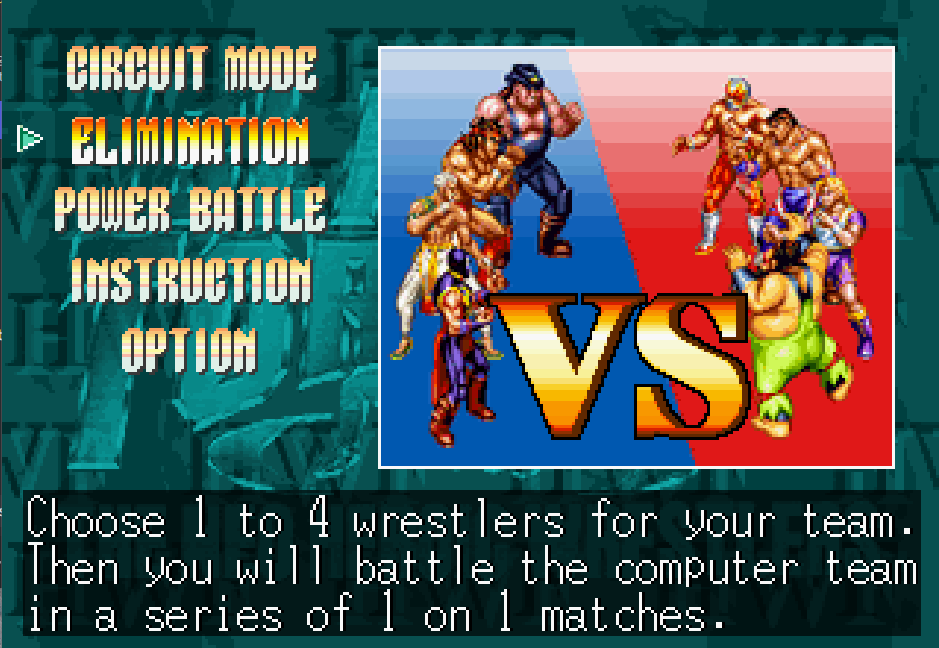 Lunar 2 Eternal Blue (English Translation Preview v0.12)
An early sneak peak at the English translation for Lunar 2 Eternal Blue. It’s a single disc with the Working Designs PlayStation script inserted (for now) and VWF inserted (Game Arts got rid of the one from Lunar 1). Items, Spells & UI text are mostly there, however, there are some text glitches here and there. There are numerous elements that remain as of yet untranslated, as this is still a work in progress, and the subtitle format has not yet been decoded. Audio remains in Japanese.

Dragon Ball Z: Idainaru Dragon Ball Densetsu (Spanish RE-Translation)
All menus and readouts in this 1996 fighting game have been translated to Spanish, while all spoken dialog remains in Japanese. While there were English, French & Spanish PAL releases in Europe, this translation works directly from the original Japanese version, seeking to clarify elements and make certain information easier to understand. 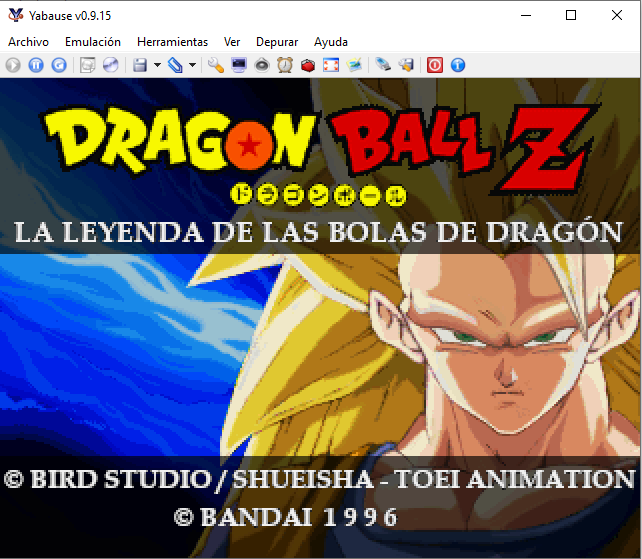 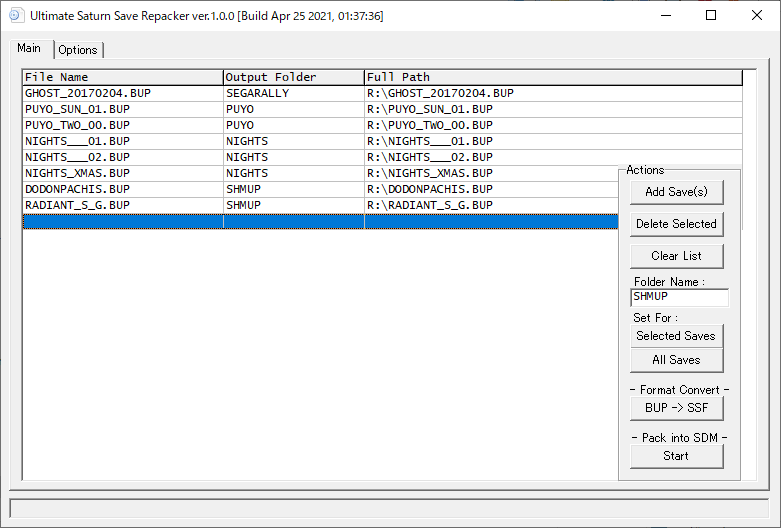 Sega Saturn Patcher – v1.95
The Sega Saturn Patcher is a multi-level Patching utility that lets you create patches of your hacks as well as apply them at a per file level for maximum compatibility with the various cd formats., rip your CDs, add Sega RPG Fans Netlink 14.4kbps modem patch, provide an advanced region free utility that rebuilds the IPBin to allow for all regions, and many more features. This particular revision was built with contest entries in mind.

Saturn Save Converter
This handy dandy little tool allows you to drop in your save file on top, and covert it automatically to a wide range of emulators and formats including BUP. Need to pass a save from Mednafen to a team, and they are all on a different device? Do not worry, the Save Converter has you covered.

Ponésound – SCSP 68K Sound Driver
This open-source sound driver for Saturn (with Jo Engine usage demos) features a driver binary that is uploaded from CD to the MC68EC000 in the Saturn’s sound subsystem. The 68K’s driver binary performs automatic channel management and real-time ADX decompression. It also aids in the timing of PCM and ADX streams a linked library, built to be compatible with Jo Engine / SBL. The linked library includes support for ADX+PCM streaming simultaneously and abstracted loading of the driver binary and abstracted playback of sound effects. In this way the driver binary acts as a black box. It doesn’t need to be understood, only the simple functions of the linked library do.
This driver is a significant improvement over SEGA’s official driver, so long as you don’t require tone banks / sequencing support. It supports more channels for general sound effects and real-time ADX playback in a way that does not compromise the performance of SH-2 at all.

Simple Saturn Model Converter
ReyeMe has used this simple model converter in the creation of TankGame and for a game currently under development and soon to be released. The tool shows loaded models in a window with an XY grid and allows rotation of quads and/or setting them as double sided or meshed. It also supports plugins for import/export of additional formats. 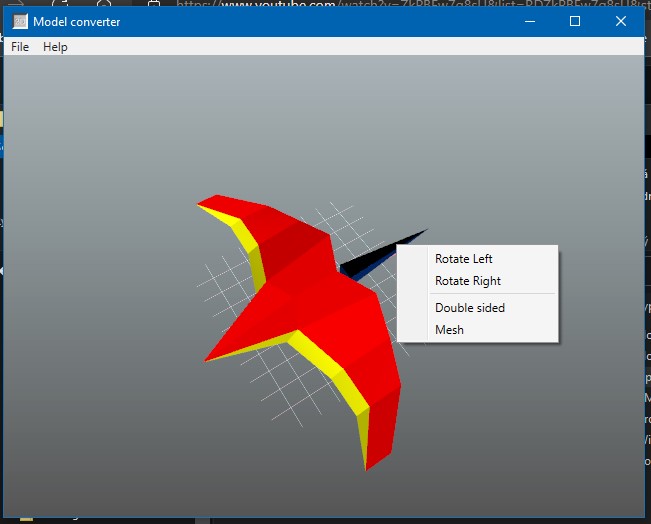 Contest Rankings have begun to pour in. Check back for the final contest results…