Recently, Nate (DirectFeedGames) and Modern Vintage Gamer (MVG) invited Matt Philips onto the Nate the Hate podcast.  Where they discussed various issues regarding the video game industry, giving a inside look into this passion we all love.  The primary topic for this episode was on the issue of development time crunch within the industry.  Their guest Mr. Philips, who many here might remember as the developer of the recent new SEGA Mega Drive/Genesis game Tanglewood, gave a recount of his time as a developer with various game studios over his work history.

After the introductions, the podcast looks into the history and background of Mr. Philips and how he got into the video game industry.  His personal experience with mandated development crunch with the studios he worked at as well as his personal self mandated crunch when developing Tanglewood.  Comparing and contrasting the differences and similarities of the situations while giving their individual perspectives on it.

Getting into the main topic of the podcast.  The three discuss the recent breaking news that CD Project Red (CDPR) would be instituting mandatory crunch/overtime to help get CyberPunk 2077 ready to meet its November launch.  This had gone against a statement CDPR co founder Marcin Iwiński made in May of 2019 to Jason Schreier formerly at Kotaku (now at Bloomberg).  In that article Mr. Iwiński said CDPR plans to respect developers through having a “non-obligatory crunch policy” and that when dev workers would be asked to do overtime, that this would not be “mandatory”.  However now the dev workers at CDPR must pull 6 day work weeks till the release of the game.

As they discussed this topic further.  Mr. Philips discusses how he handled and dealt with the nature of crunch from the studios that mandated it while Nate and MVG also talked about the possible insidious nature that can come about due to crunch culture.  As well as the nature of public perception, agendas, over the top fans of brands, realities of business relationships, pace of news cycle, and short term memory of the public.  They continue looking at all these various points down to it’s nuance with some of the worst examples in the video game industry.

MVG reiterated that there are good development studios and that it’s really the worst examples that are making the news.  With Nate and Mr. Philips adding to those sentiments with their examples as they wrap up their thoughts and the podcast/interview.  They also stress that while crunch has also been a long standing issue in the games industry.  The modern pace, time, and scale of development for new games far eclipses what they feel was like when developing in the past.

This episode touched on multiple aspects of the video game industry as well as reflect on the struggles of working life itself, so its not just a video game issue.  Coming in at just over an hour, any one who loves to learn about the gaming industry or wants to be in the know on what issues are currently affecting the industry should definitely check this episode out as there are many topics that could apply not just to working in game development but other areas in life as well.  Links to referenced or cited sources below. 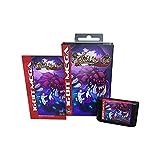 (as of February 4, 2023 – More infoProduct prices and availability are accurate as of the date/time indicated and are subject to change. Any price and availability information displayed on [relevant Amazon Site(s), as applicable] at the time of purchase will apply to the purchase of this product.)