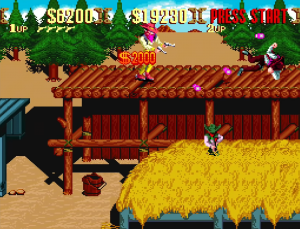 If you were a gamer during the 16-bit generation there’s a good chance you’ve heard of Konami’s incredible Sunset Riders game for the Super Nintendo, Sega Genesis and Arcades.

Sadly though, if you were also a Sega gamer, chances are you were less than impressed with the disappointing port on the Genesis.

Well, all that is about to change as popular Sega modder Pyron and TiagoSC set out to create Sunset Riders – Mega Drive Arcade Edition.

Let’s get one thing out of the way, this is not a romhack of an existing game, it’s an entirely new port of the arcade game being built from the ground up with a brand new engine.

So far, only the first level is nearly completed, but the results are already impressive, the graphics, physics and controls mimic the Arcade original with an impressive accuracy. All of the game’s assets were taken straight from the Arcade with only some minor alterations done to fit with the less powerful hardware.

As of now, it’s still unclear how or even if the game will be distributed without risking a clash with Konami’s legal team, so we’ll hope for the best.

In the meantime, you can check out its progress below: