New Super Mario Land is a new homebrew release that re-imagines Super Mario Land, the iconic Game Boy title, on the Super Nintendo. It was developed in secret by a mystery coder and 30 custom cartridges of it were sent out to select people to celebrate the Game Boy’s 30th Anniversary. ChronoMoogle posted pictures and videos of their cart on Twitter this morning, and by the afternoon an unknown source had released the ROM for free at archive.org. SNES Central also posted pictures and a video clip of their custom cart as well.

The cartridge itself is quite interesting. The coder chose to use Japanese Nintendo Power cartridges. Nintendo Power (not the magazine) was a service offered in Japan where users could purchase and flash different games to a reprogrammable Nintendo Power “SF-Cassettes“. Last year I reported on a project to scan the NP manuals in high resolution.

Get the ROM here. It’s confirmed working on the SD2SNES on a real Super Nintendo/Super Famicom, on MiSTer, the Super Nt Jailbreak, and even the Super Retro Trio. So it probably works well on all SNES platforms.

UPDATE #1:
amoore2600 posted a tutorial on how to flash New Super Mario Land to a real Nintendo SF-Cassette using the Sanni CartReader and an Arduino:

UPDATE #2:  A few users (including Bob) were absolutely stunned at how great the game is, but didn’t like the “woo” sound effect that occurred when Mario jumps. Luckily, qwertymodo was kind enough to figure out a solution for me: You can either use Game Genie codes or a patched ROM to disable the sound effect:

ROM Patch: If you want to make it a ROM patch, you just open the ROM in a hex editor and go to offset 0x1E75 and replace the 3 bytes 20 CC 1E with EA EA EA (then repair the checksum with a tool if you feel like it).

1. If you are using a SD2SNES you have to turn off “1CHIP transient fix” otherwise you will only see the a black screen with sound and a brown line on the bottom.

2. You can easily make a cheat file that disables the jump sound, by copy and pasting the text below into a text file, then renaming that file “New Super Mario Land (J).yml” (or whatever you’ve named the rom).  Make sure to place the *.yml file in the sd2snes/cheats folder (if it does not exist please create the folder and place it there). It is automatically enabled when the game starts. You can enable / disable them during gameplay using the L+R+Start+A / L+R+Start+B button combinations; if you have in-game buttons enabled. 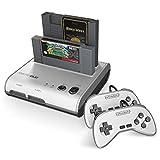 (4131)
$59.99
2 game cartridge slots. Compatible with Original NES and SNES games S-Video Connection Capability Includes 2 wired controllers. Includes AV/S video cable. Includes 5V AC Adapter Compatible with Original Port 16-bit SNES controllers
(as of February 3, 2023 - More infoProduct prices and availability are accurate as of the date/time indicated and are subject to change. Any price and availability information displayed on [relevant Amazon Site(s), as applicable] at the time of purchase will apply to the purchase of this product.) 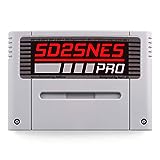 (59)
(as of February 3, 2023 - More infoProduct prices and availability are accurate as of the date/time indicated and are subject to change. Any price and availability information displayed on [relevant Amazon Site(s), as applicable] at the time of purchase will apply to the purchase of this product.) 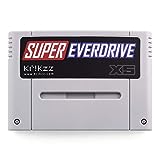 (29)
Loads games instantly. Compatible with all Super Nintendo Systems. NTSC, PAL, NTSC-J. DSP chip on board. Allows you to play games like: Pilotwings, Mario Kart, Top Gear& Improved EverDrive menu (compared to previous super-ed generations) SDHC/SDXC Mi... read more
(as of February 3, 2023 - More infoProduct prices and availability are accurate as of the date/time indicated and are subject to change. Any price and availability information displayed on [relevant Amazon Site(s), as applicable] at the time of purchase will apply to the purchase of this product.)