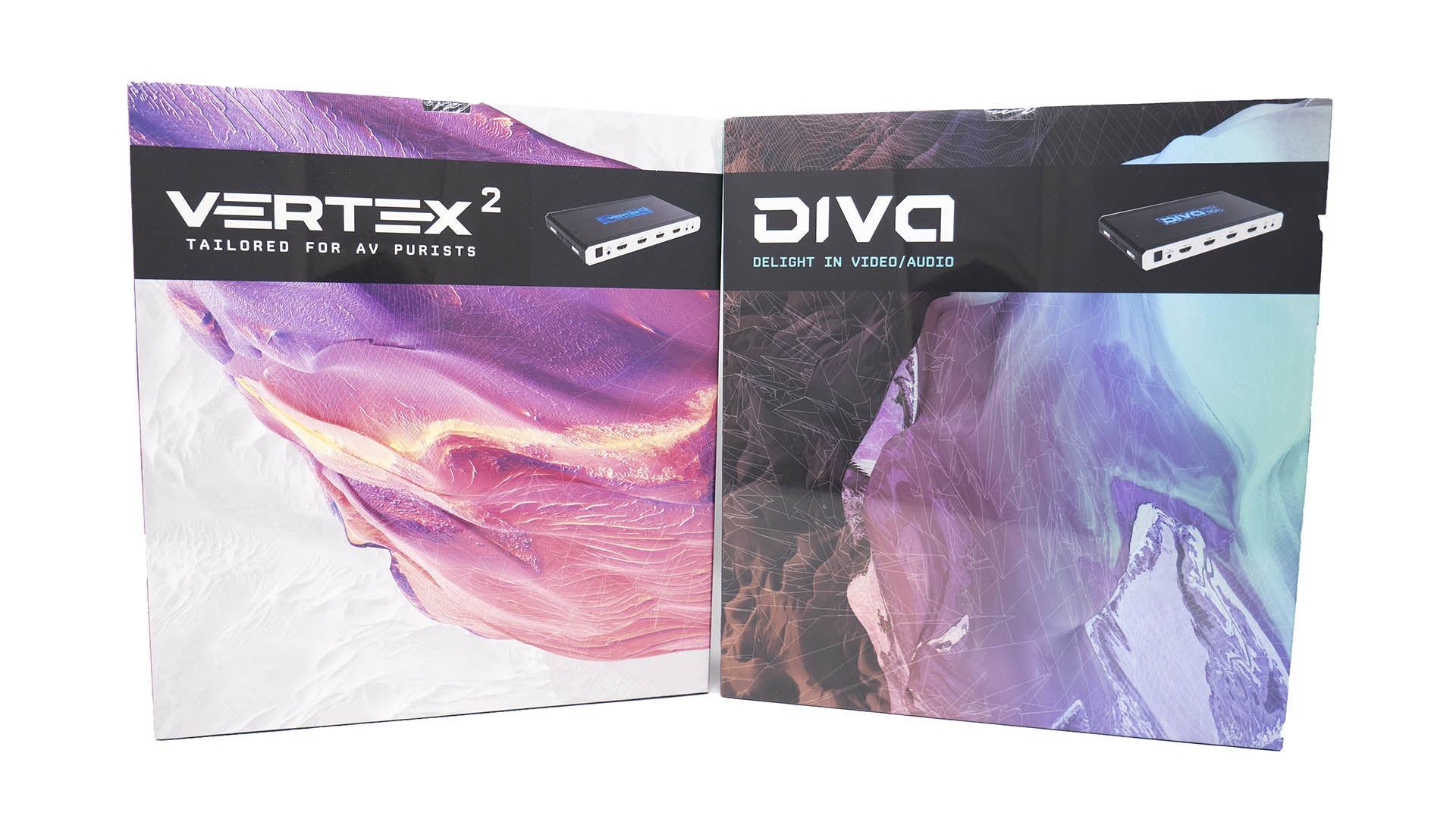 I recently tested two products from HDFury:  The ‘Vertex2’ and the ‘Diva’.  These are pro-level HDMI devices that are complicated to use, but provide an amazing amount of control over the signal.  Each device offers 4-in, 2-out HDMI matrix switching capabilities, full control over EDID and up/downscaling between 4K and 1080p.  These products are for experts who want all of these features (and more) in one device; You can get almost every feature much cheaper with other individual devices, but depending on your setup, these might still be the best choice.  Read on for more info:

The two products are mostly the same, however the DIVA adds LED light-strip controls, a built-in lag tester and HDR-SDR conversion, allowing you to input HDR 4K and output 1080p SDR for recording.  Also, the second HDMI output will always output 1080p, no matter what.  The lag tester is a neat feature, but a bit convoluted to use:  You need to access the web interface to enable it and 4K support requires a loopback HDMI connection that utilizes it’s built-in scaler.  So, definitely don’t buy this thinking it’ll replace your Time Sleuth, but it’s there in a pinch.

The Vertex has the advantage of being able to output 4K from both HDMI outputs, as well as still offer 4K to 1080p conversion, however it lacks HDR-SDR conversion.  So, if your capture card doesn’t support HDR, you’ll have to make sure your 4K source is SDR.  Unfortunately, that makes neither product a perfect fit, since you either loose HDR-SDR conversion, or the ability to pass 4K to both ports.  It also lacks the lag tester feature, but once again, that definitely felt more like a “bonus feature”, than a main feature.

Using both is exactly the same – And really frustrating if you have no prior knowledge of the products.  There’s no remote control, so you’ll either need to connect it to a local network for web access, or fiddle with buttons on the sides of the unit.  I found the screen on top of the unit to be really helpful to reference the signals being passed through, but really cumbersome to access features, so I stuck with the web controls.

The first problem we ran into was we couldn’t get a signal at all on my 4K capture card, or OLED TV.  This turned out to be an EDID issue and was solved by manually selecting the input resolution, colorspace and refresh rate…but figuring out that was the problem took an embarrassingly long time.  None of the HDFury’s “auto” EDID modes seemed to work, leading me to believe something else was wrong in my setup, but it was just EDID.  In our livestream I was using my laptop, but I found the exact same issues when using a modern streaming box like an Apple TV or Roku:  The EDID settings that let my capture card work, wouldn’t work with my OLED TV and vice versa.

We eventually did get it working and one of the first things we wanted to test, is how the signal was processed by the devices:  Will it retain the full 4:4:4 colorspace, or is there internal compression?  To do this, we used both an Avermedia Live Gamer 4K (I’ll review this separately) and a Datapath Vision E1S.  Both cards can handle 1080p60 4:4:4 (although the Datapath looks a bit better) and the Live Gamer 4K can accept 4K60 4:4:4.  We also used a dynamically-generated test pattern, originally made by Extron, but now hosted by Fudoh.  This is one really handy pattern that allows you to very easily test stuff like this – Just make sure to set your PC’s resolution to the exact output you want to test, make sure your display’s “scale and layout” is set to 100% (not zoomed) and hit F11 to make the web browser full-screen:

The Diva was able to pass-through 4K60 4:4:4 to output #1 and the Vertex2 was able to pass it to both HDMI outputs, however I had to change the “scaler” settings:  The Vertex2 required me to turn off scaling, while the Diva required it set to “off”.  Much like EDID, I felt this is something that should have been totally automatic, but it wasn’t.  Here’s a screenshot of the scaler interface via the web browser: 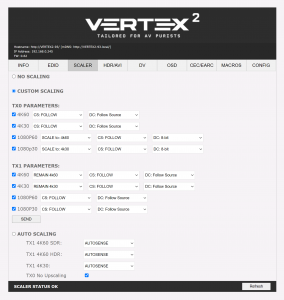 Both devices were able to downscale 4K to 1080p, however some kind of compression was definitely applied.  It’s possible more settings could be tweaked to fix this, but it’s my opinion this isn’t a big deal:  The use case for this is people who want to game on their new, 4K HDR TV’s, while streaming through a standard 1080p capture card.  For the purpose of livestreaming, I doubt anyone will ever notice the difference.

The devices can both scale from 1080p to 4K with zero lag added; Only 1080p is scaled though, no other input resolution.  Some compression does seem to be applied, but it’s not as bad as the downscaling.  This might also be tweaked a bit with the scaler settings, however you can’t select the type of scaling.  I was really hoping HDFury could add an option for nearest-neighbor 1080p60 4:4:4 to 4K 60 4:4:4, but they informed me the chip they use isn’t capable of that.  I honestly lost all interest in the built-in scaler after learning that, since the quality of the scale is about what you’d get from the scaler built into your TV.

Both Voultar and I tested the lag with a Time Sleuth and confirmed these devices don’t add any lag in passthrough or upscale mode.  I wasn’t able to test the 4K downscaling, but once again, that feature is meant for streaming where a few milliseconds of lag won’t make any difference on the capture card side.  Overall, I’d say these devices should be considered “zero lag devices” for gaming.

I was also curious how they’d both handle the odd signals a Super Nintendo would send through the OSSC in 5x mode.  Surprisingly, both HDFury’s had no trouble with the signal at all, even when cycling through all modes from passthrough to 5x.  There were no audio dropouts and it essentially worked as if there was no device between the OSSC and the capture card at all, which is great.

Overall, this is a tough device to recommend.  If you just need PS3 capture card compatibility, a $20 HDMI splitter can take care of that.  If you’re looking for an HDMI splitter that also downscales port #2 from 4K60 HDR to 1080p for streaming, you can get the one linked above for $30.  And, of course, a Time Sleuth is $80, but can be configured to output from 240p to 1200p, making it a much better device for lag testing.

So, who is this device for!?  I’d say any creator, or person who runs an event that needs absolute full control over their HDMI EDID, with the ability to scale and manipulate the signal to fit their setup.  Basically, it’s a “pro-level” product that’s designed for experts.  I can think of many odd scenarios they’d come in handy for my testing, but they’re definitely not going to be part of my main setup.

Voultar and I did a livestream, where I showed almost everything discussed above.  The stream was basically an example of “this is what it’s like to test a brand new product with no previous knowledge of how it works”.  I imagine it was mostly boring, but a really accurate representation of what it’s like to use these for the first time, as well as what it’s like to be a product reviewer.  I’m not sure everyone would enjoy it, but it’s there if you’re interested: