Woozle has just posted a firmware update for users of the Game Boy Advance Consolizer (GBAz), that involved an almost entire rewrite of the Consolizer code to optimize timing, FPGA usage, and power!  The same main features still match the original video review (above), but lots has been added.  Unfortunately, it’s a complicated upgrade process (more info below):

As mentioned before, the upgrade should be considered expert-only, as you need a programmer and a custom cable to flash it.  Also, unless any news bugs are found, this will likely be the last firmware released for the GBA Consolizer:  https://www.game-tech.us/gbaconsolizer-firmware-update/

Dave made a video showing how to update, but once again, it’s not the easiest method: 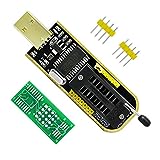 (102)
Support 24EEPROM and 25 SPI flash 8pin/16pin chip USB to TTL port, can getroot online, With CH341A chip For a variety of software for backup, erase, programming, calibration and other movements. STC microcontroller supports a full range of program do… read more

(as of February 5, 2023 – More infoProduct prices and availability are accurate as of the date/time indicated and are subject to change. Any price and availability information displayed on [relevant Amazon Site(s), as applicable] at the time of purchase will apply to the purchase of this product.)