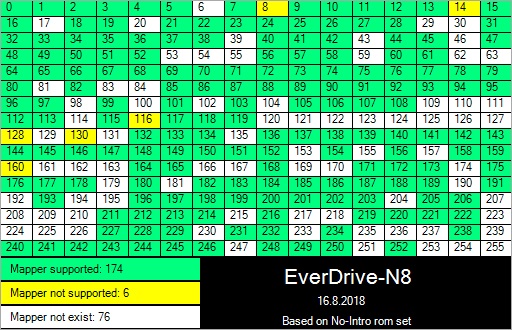 Frederic Mahe, the coder behind the scripts for the EverDrive Packs Lists Open-Source Project, wrote a new script to detect specific mappers from NES ROM headers and then copy the matches to a subfolder. This allows us to take a look at an exact list of what new games will work now that Krikzz has added the 50 new mappers in EverDrive N8 OS v2.0 RC1. When ran against No-Intro 2018-07-21, that translates to 39 newly supported games. Perhaps we will even turn up even more games after running the script against sets like GoodNES, but this is already an impressive batch of new games to test out. Only 4 games now are unsupported due to mapper incompatibility, although there will always be more games that are too large or have other quirks that prevent them from working.

Update #2:  Looks like the numbers were off.  Here’s the new totals: