I just beat (not completed) the game Celeste for the Nintendo Switch.  It was a challenging game that I enjoyed playing, but have no desire to revisit.  It’s still a game I’d recommend to both retro and modern gamers and I’d like to share my feelings as to why.

These opinions are the writer (Bob’s) and may or may not reflect the opinions of the rest of the RetroRGB team.  Please direct all hate at Bob and not the other writers.

I’ll start out by saying there aren’t any hard spoilers in this review, but I do reveal the main aspects of the game at the beginning, then talk about things that come later in the game.  If you’re like me and want to approach a game totally in the dark, stop reading now.  If you’re cool with a basic setup of the game (spoiling no more than the first five minutes), keep going and I’ll let you know when to stop reading.  Let’s begin…

The game Celeste was released about two years ago on all modern platforms and (as I typically do), I waited for the game to mature a bit before playing;  We’re living in a time of day-one patches and games being released with bugs still present, so gamers who buy on launch day seem to be the final line of beta testers.  I (basically) beta test for a living, so when the rare opportunity to actually sit and play a game arises, I don’t want the experience hurt by bugs (I’m not talking about Celeste specifically, just modern games in general).  So, when a friend of mine offered their “complete” Limited Run Games version of Celeste, I jumped at the chance…and was delighted to find that no software updates were needed:  Just plug in the cartridge and start playing.

The game opens with dialogue that’s somewhat interesting, but not too time consuming.  That’s an important factor for me when I play a game:  I don’t want an hour of cutscenes and a ‘training’ mode, I just want to start playing.  I feel like Celeste spends the right amount of time on dialogue throughout the whole game and only once did I feel the need to skip a cutscene.

Once you start the game, the dying beings pretty much immediately and that’s a giant part of the game.  While there’s some exploration, the game is structured all the same:  Each “room” presents it’s own set of platforming-puzzle challenges that you need to solve and rehearse at the same time.  Many screens are very challenging and you’ll need to die a bunch of times, just to test different ways of completing it.  While I found this incredibly frustrating at times, I almost never felt it was unfair, for a few reasons.

First, when you die, you restart at the same room.  Most rooms are small, filling up only one or two screens on your TV, while others feel like full levels.  At no part in the game did I feel I was sent back too far…although there were a few frustrating rooms that would have been much easier if they were split up.

Next, I was able to figure out the challenge of each room in the game, without cheating.  Some of the later levels got pretty tricky, but unlike many other games (old and new), Celeste completely earned my trust:  Earlier levels had solutions that were pretty obvious, but required some practice.  Then toward the end when the “puzzles” got more challenging, I considered cheating twice, but thought: “No, every other room in the game had a solution, I want to keep trying until I find it”.  In my opinion, that speaks volumes for a game’s design.  So many times over the years, I looked up the solution to a puzzle or item location, read the answer and thought: “That’s bullshit, no one would figure that out without hints”.  Either that, or I’d finally beat a room and think “That sucked, I never want to do that again.”  Not with Celeste.

The “one room at a time” nature of the game continuously reminded me of some really good cell phone games I’ve played over the years – Games you can enjoy either one screen at a time, or one level at a time.  I feel like this will translate to the Switch’s portable mode well, for users who game on the go.  You build your skills throughout the game and each technique is applied to later levels, but each room presents it’s own unique challenge.  This is good for short play sessions, but more than half the rooms in the game require many tries (and a lot of time).  For me, each room would consist of finding the solution to exit, then gaining the muscle memory of exactly how to navigate the room with the pinpoint accuracy required to beat it.  That translated to playing some rooms countless times to get the pattern correct.

While it was frustrating at times, the fact that this is the entire point of the game kept me from wanting to quit.  This is in contrast to The Messenger and Wonder Boy: A Dragon’s Trap, that were both games rooted in action and exploration…but sometimes required you to play the same part 100 times in a row before you got it right.  Rather than being angry that I spent so much time just trying to proceed, I ended up feeling rewarded after a challenging level.

WARNING:  After the ads are some spoilers!  I don’t think they’re the type that will ruin the game, but I do show one of the ending screens.  STOP NOW if you’d like to keep the rest of the game a mystery!!! 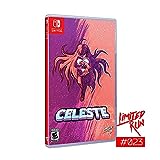 (119)
$289.99 $256.99
Exclusive physical release featuring holofoil cover artwork (same as pictured). Includes Farewell DLC and a full-color manual.
(as of January 30, 2023 - More infoProduct prices and availability are accurate as of the date/time indicated and are subject to change. Any price and availability information displayed on [relevant Amazon Site(s), as applicable] at the time of purchase will apply to the purchase of this product.) 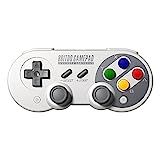 (3786)
Ultra-compatible with Nintendo Switch, Windows, macOS, & Android Rumble vibration, Motion controls, USB-C Wireless Bluetooth and direct USB connectable with built in lithium ion battery D-Input and X-Input functionality Connectivity:Wireless Bluetoot... read more
(as of January 30, 2023 - More infoProduct prices and availability are accurate as of the date/time indicated and are subject to change. Any price and availability information displayed on [relevant Amazon Site(s), as applicable] at the time of purchase will apply to the purchase of this product.)

Very early in the game, one of the “tips” you receive between levels tells you that the “strawberries” available to collect throughout the game aren’t required and are only to “impress your friends”.  As you proceed throughout the game, you’ll notice that some rooms only exist if people would like to collect the strawberries, or something called b-sides…and I still have no idea what those are.  I didn’t even bother trying to get most of the extra stuff, as I just wanted to play through the game.  I really appreciated that the game came right out and told me those were unnecessary and didn’t leave me wondering if they would eventually “get” me something – Yet another thing I feel the dev’s did right to “earn my trust”.

Unfortunately though, not only do the strawberries not get you anything, nothing does.  I realize this is the point of the game:  Enjoy a bunch of challenging rooms, one at a time until the game is complete.  Still, I think there were only two “power ups” throughout the game and nothing that really made it easier, since the moment you got a new powerup, the game required it.  In fact, at times it felt like the powerup made the game more challenging, not less.  I don’t think the lack of powerups took away from the game, but they sure would have made it a bit more fun.

There were only two things I didn’t like about the game.  First, the “leaf controls” felt slippery and never fun.  I’m being intentionally vague as to not spoil it, but I never got the hang of it and wish it just wasn’t in the game.  In fact, I used the d-pad on an 8bitdo SNES-style controller throughout the game, but for some “leaf sections”, I switched to the analog stick…and it only felt a hair better.  Maybe you’ll have an easier time, but I just didn’t like it.

Next, there’s one “chase” that was boring and felt like it lasted for hours.  It’s pretty much the only part of the game, I just didn’t like at all.  Once again, maybe you’ll have different thoughts on it?  I find it common that I enjoy parts of games other people hate and vice versa, so I’m just sharing my thoughts.  It didn’t ruin the game for me, but I sure wish it was shorter.

Another positive thing about Celeste is I never felt it “talked down to you”.  This was a sharp contrast from the nerve-grating characters in The Messenger that mocked you throughout the game.  Alternatively, this game felt “supportive” and they even remind you dying it’s an integral part of learning the game and just be treated like a statistic (unless you’re intentionally doing a speedrun or low damage run of course!!!).  The story itself is pretty good, although they got a bit too philosophical at times.  I imagine if I was a teenager (or immature 20ish year old) the game might have “spoke” to me, but as an adult, it got a bit tiresome at a few points.  Overall, it wasn’t bad and not a real complaint, just something I thought I’d mention.

WARNING:  Scenes from the end of the game and a tiny spoiler of the ending is after the ads.  PLEASE STOP READING if you’d like to be surprised!!!

Towards the end, I was happy the game was over, but felt fulfilled completing it.  I don’t think I’ll ever replay it though, as each room felt “complete” the moment I figured it out.  This is in contrast to exploration-style metroidvania’s that I often feel the urge to replay right after beating:  Did I miss anything?  Now that I know what to expect, will I approach the game differently?  Are there other cool upgrades I can get?

Celeste didn’t offer any of that, but I don’t think it ever intended to.  The game stuck to what it was good at from the very beginning and (other than the leaf), never tried to be something it’s not.

The “strawberries are only to impress your friends” joke is revealed as a hint in the end though.  Apparently the more you collect, the better the ending screen.  I got the worst one (pictured below…here’s ANOTHER spoiler warning!!!), but I don’t think it took away from the game at all.  Unlike Super Metroid though, it didn’t motivate me to replay the whole thing either.

After beating the game, I was presented with another level.  I’m not sure if this was part of the original game, but I assume it’s an addition for the LRG released.  I didn’t really have a desire to play any more…and I couldn’t anyway.  As soon as I entered the new area, I was stuck at this screen: 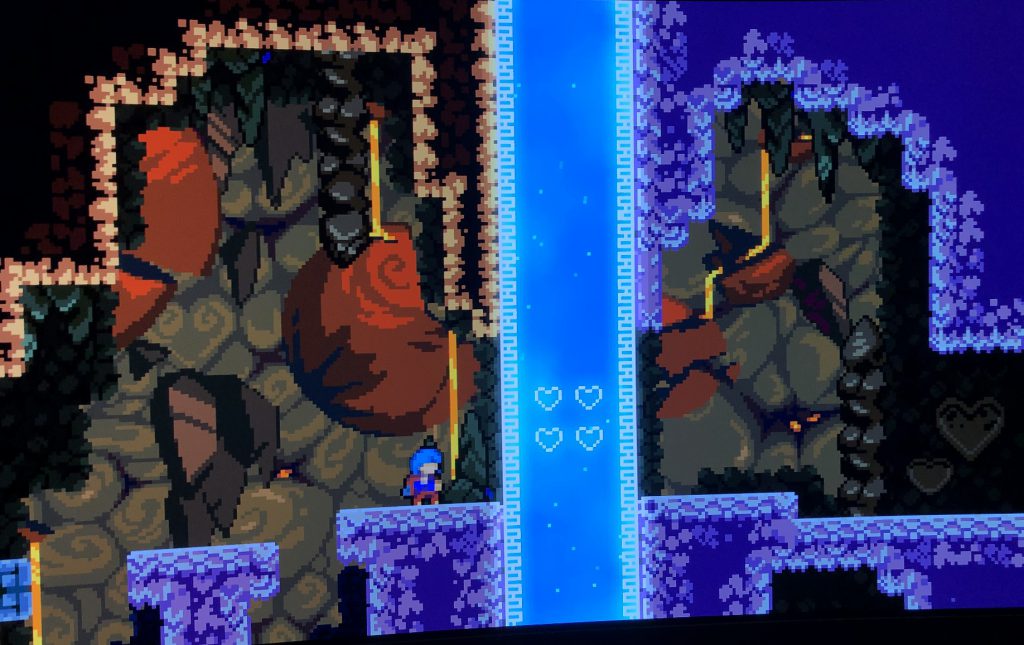 So, overall, I really enjoyed it and definitely recommend it to people who are prepared for the assault they’re about to face…but I’ll never play it again.  After dying one thousand, either hundred seventy two times, over the course of seven and a half hours, I think I’ve had enough. 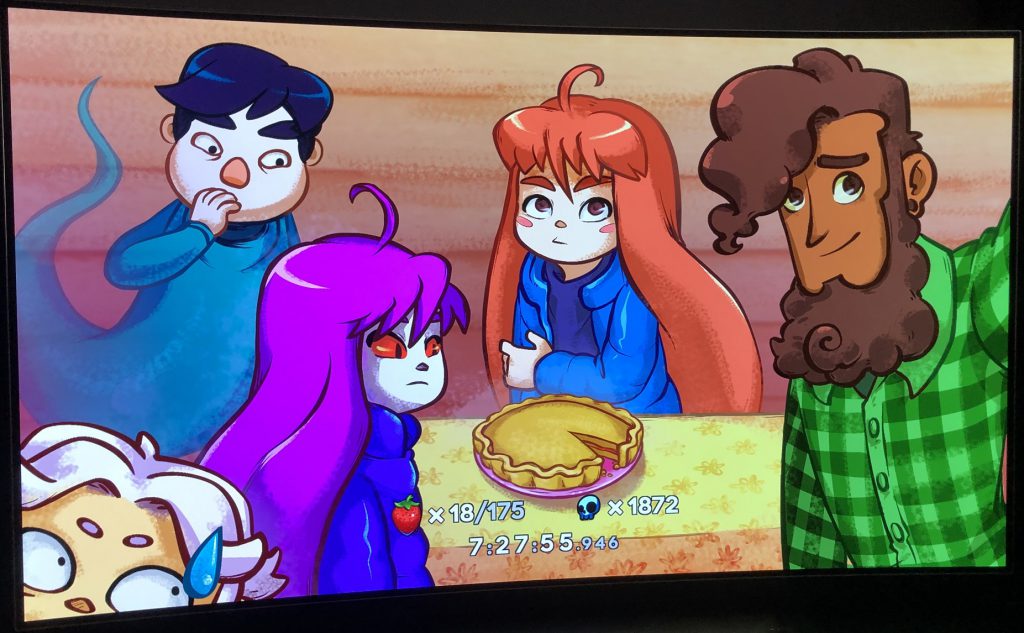