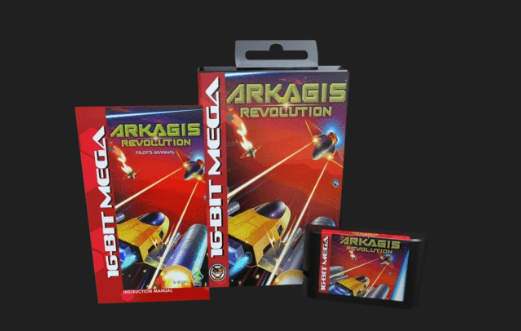 Back in 2019, we covered Arkagis Revolution, a “mode 7” style shmup for the Sega Genesis / Mega Drive by famed developer Sikthehedgehog.

The game is a top-down shooter which features a rotating play field at a full 60fps and features voice acting which is impressive for a cartridge-based Genesis game. As many readers of RetroRGB already know, the Genesis/Mega Drive does not feature any scaling and rotation hardware and many developers never took the time to properly utilize the sound hardware (I’m looking at you Street Fighter II: Special Champion Edition) for great sound.

Arkagis Revolution can be purchased both digitally or physically through various online retailers throughout different regions. They can be found on through arkagis.com, the official website for the game.

Physical copies of the game cost from $40 – $60USD depending on whether you prefer a stand-alone cartridge or a complete in box option with a case and manual.

The digital version is $14.99 through itch.io and can be played on a flash cart such (Everdrive / MegaSD, ect.) or your favorite accurate emulator. There is also a trial version which can be downloaded directly from the developers website, arkagis.com.

For a full review of Arkagis Revolution, check out St1ka’s coverage of the game, linked below.