A fanhack of Ocarina Of Time was just released called: Zelda: The Missing Link.  While it’s technically a romhack of the original, this game includes completely new areas and the game aims to fill the story gap between OoT and Majora’s Mask.

It’s reported that the game’s playtime is fairly short, making this an excellent choice for people who want to (re?)experience an N64 classic without putting in 20-30 hours like the original.  Evern though the game’s on the shorter side, there’s still cutscenes, new weapons and other features that seem to really make it worth your time.

The game is playable on original hardware via ROM cart, on the Wii’s Virtual Console and through emulation as shown in the video.  The patch has had a few updates since it’s original release and at the time of writing is up to v1.3.  This fixed a few bugs, but people who’ve played the game have suggested you save often, as the game will occasionally freeze for them. 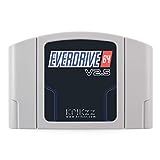 (as of September 25, 2021 – More infoProduct prices and availability are accurate as of the date/time indicated and are subject to change. Any price and availability information displayed on [relevant Amazon Site(s), as applicable] at the time of purchase will apply to the purchase of this product.)