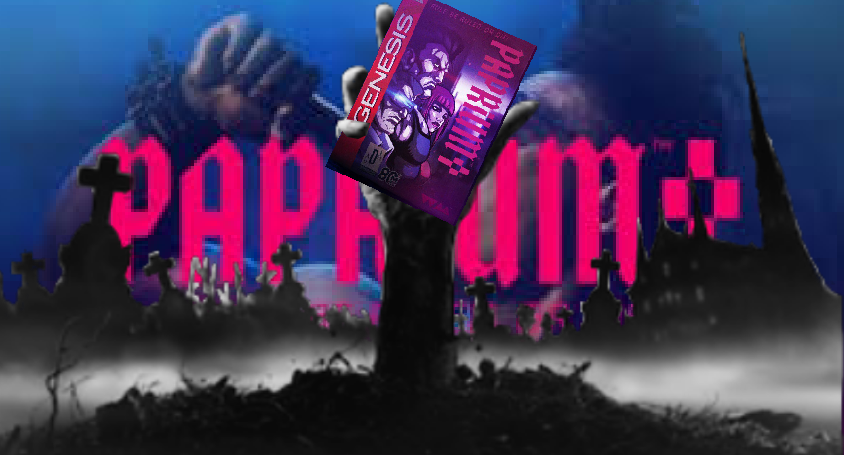 After years of waiting, the spine-tingling debacle that was Paprium may finally be over. Unfortunately, that does not mean that we’re off the Watermelon Co. roller coaster ride. It simply means that the paying customers as well as the “investors” on the Paprium project may finally receive a product of some kind for their contributions.

For anyone that isn’t familiar with Paprium, it is a brand new Genesis game that was announced way back in 2012 under the title Project Y. The game, which was originally advertised for release on September 16, 2017 after a round of pre-orders earlier that year just received a new release date; December 16, 2020 is when units are due to start shipping to consumers.

This article isn’t going to cover the entire history of Watermelon Co., it’s owner, “Fonzie” (Gwénaël Godde), the long, drawn-out development of the game which includes the disastrous “launch party” from years ago, or the magicalgamefactory (it’s back up…for now) web page being quietly shut down while leaving its paying customers without options.

Much of that information can be found on St1ka’s Youtube channel, which has a three-part documentary that totals over an hour and a half in length and still doesn’t cover everything. (St1ka, if you’re reading this, it might be time for Part 4.)

With all of that said, let’s get to the current events.

On December 13, 2020 consumers received the following email from Watermelon: (I will highlight what I feel are the important parts)

Thank you for your patience!

We are proud, today, to once again, deliver.
More than 30 years after the initial release of the system, 20 years after the end of the 16-bit era, and 8 years of sweat, this is the ultimate game in the console’s library.

PAPRIUM is the pinacle of video game programing, engineering and artistic excellence, nothing less, believe it or miss it!
Actually, PAPRIUM is much more than a game, it’s the total and absolute victory against the odds.

We are, at this very time, packing and soon shipping our preorders. The release day will be on December 16th 2020.
Our stocks are limited and we will likely sold out in a snap, you will be able to preorder for the next shipping batch, estimated delivery 1st trimester 2021. Don’t panic, the wait is worth it.
http://www.paprium.com
So don’t miss out, be bold, be part of 16bit history.

In the past and whenever we could, We always sold our products at a floor price and some of you may notice a steep increase in our pricing.
To clear any misunderstanding, our first batch of PAPRIUM was developed, manufactured and shipped at our own expense, we have to recover this massive loss in our future sales.
More over, we believe this is not a Android, PS5 or WiiU game. It’s closer to a tailor-made item. The aftermarket (second hand) price don’t lie, our products often reach 200% to 1000% of our original sale price. As opposed to the past, we will also update our price as our limited editions gets closer to sold out.

Anyone pissed about lack of support, well, we cut out all our cost and staff so the game can ever release. And the game is there, that’s all matters.

Important notes:
– If you have preordered a game, you have/will receive an email shortly about the shipping procedure. You can also sign-in and go to your account to check preorders status.
– For any past refund request, we have already sent you an email, we are processing them at the moment.
– You did work on the game? Same, an email will reach you shortly.
– For the guests present at the 2018 MD’s 30th anniversary party in Paris, we also sent a specific email to you.
– Any game works on any original SEGA system (MD1,2,3,GEN1,2,3,Xeye,WonderMega,CDX…), there is no region locking.
– We unfortunately broke compatibility with some Model1 systems, please check PAPRIUM’s FAQ on our website for additional informations.

Once we get past the marketing speak, the part that may interest Retrorgb readers is that the game is listed as incompatible with certain Model 1 systems. The incompatibility list currently states Model1 Japanese systems with serial A10xxxxxx; Model1 PAL serial 1601-xx; Model1 USA serial 1601-xx. There may be more as the list is currently a work-in-progress.

The FAQ also states that cartridges released prior to 2021 (this entire batch) MAY be serviceable in the future. How this would happen is anyone’s guess at the moment. The game is rumored to have hardware built-in that will allow online connectivity, meaning that downloadable updates may be possible, but this is just pure speculation. Other options are mailing in your cart the old-fashioned way for servicing. Again, this is all speculation.

This is the first time that consumers are linked to an actual page to complete their order for shipping, and at the time of my writing this, Paprium is still in the packing stage. This makes sense as the game isn’t set to be officially released until tomorrow, December 16, 2020.

A new round of pre-orders were announced, not just for Paprium, but also for Pier Solar, their Genesis / Mega Drive RPG from 2010. Unfortunately, prices have risen dramatically with Paprium listed for nearly 3X the cost of the original pre-order ranging from $169 USD – $229 USD.

Watermelon does address this, although some may take issue with how it’s stated:

It’s closer to a tailor-made item. The aftermarket (second hand) price don’t lie, our products often reach 200% to 1000% of our original sale price. As opposed to the past, we will also update our price as our limited editions gets closer to sold out.

If I read that correctly, they’re pricing their items based on secondary sales in addition to their production costs. It’s true that new titles for old consoles are generally small production runs that can make them more expensive to manufacture than mass-produced items, but that is just a strange way of getting their message across. They’re literally reaching out to and catering to the scalper community.

As carts start to (hopefully) ship, we should start to see reviews released in the near future. Personally, I’m not just interested in the game itself, but I’m curious as to what hardware its packing as it was advertised to use an add-on chip of some kind for enhancements. This is most likely the true reason for the huge markup in price.

Oh, and before I forget, Watermelon announced a NEW, Single-PRINT, Limited RUN type of game for the Genesis / Mega Drive: http://amb96.magicalgamefactory.com/

There is even less information about this new $160+ USD Genesis / Mega Drive game than there was for Paprium, and it’s not Project N, another announced game (for the SNES) that has become vaporware.