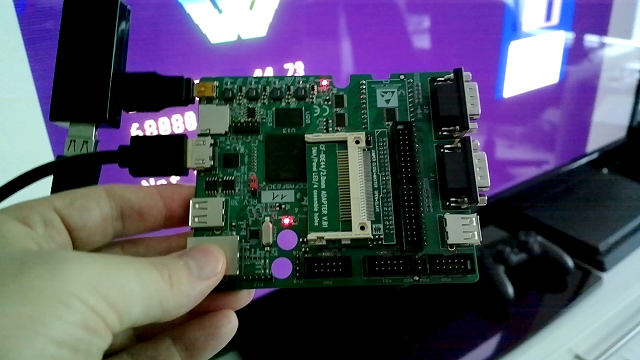 Announced over a year ago (around August 2017) the Vampire v4 Standalone, an Amiga FPGA-based system, was recently showed booting up for the first time.

The Vampire V4 has been given the attribute “standalone” because “Apollo Accelerators”, the team behind it, is mainly known in the Amiga scene for producing and releasing the great Vampire V series which basically are FPGA expansion cards for the Amiga 500 and 600 offering digital output, storage through Micro Sd and expanded RAM memory.

So the Standalone V4 is a fully fledged FPGA (Altera Cyclone V) Amiga computer with the added features of a Vampire (this model specifically comes with 512 MB DDR3 of RAM), all-in-one system. Simo Koivukoski, a team member of “Apollo Accelerators”, uploaded a video showing the V4’s board in the foreground and the Kickstart 3.1 “insert disk” screen in the back.

The V4 seems to have a CF card slot in addition to Micro Sd, for storage options, 2 Amiga Db9 controller ports, HDMI output, an Ethernet port and 2 USB inputs. It is also shown on the Apollo forums running Workbench and a few more applications.

No pre-order details have been revealed yet but it looks like an almost done project to me so we could probably get our hands on the standalone V4 sometime in 2019, hopefully?