As discussed just over a month ago, the “Sinden Lightgun” project has opened a kickstarter campaign.  The gun kit itself will run you just over $100, while there are other support options ranging from “donations” to the software developers, all the way to a model with recoil running almost twice the price at $170.

Both guns are expected to ship in October of this year:  https://www.kickstarter.com/projects/sindenlightgun/the-sinden-lightgun

The Sinden Lightgun is designed for use with emulators of all consoles and will work on all TV screens including LCD.  It’s my personal opinion that light gun games are often underrated and best played on the biggest screen possible.  After being able to play Duck Hunt on my 65″ OLED TV, I can definitely say the experience was more fun on a larger TV.  Between this project and LCDMOD team’s move to emulation, we’ll soon be able to see for ourselves if the full library of light gun games really are underrated…and how they perform with the addition of emulation lag. 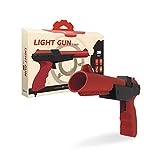 (1051)
$17.48
Compatible with NES, RetroN 1, 2, and 3 Two-tone color, revolver style hand gun Hard plastic material
(as of November 30, 2022 - More infoProduct prices and availability are accurate as of the date/time indicated and are subject to change. Any price and availability information displayed on [relevant Amazon Site(s), as applicable] at the time of purchase will apply to the purchase of this product.)
Liked it? Take a second to support Bob on Patreon!