Sega has announced that to celebrate their 60th anniversary, they’ll be launching the Game Gear Micro:  Four mini Game Gear’s with a 1.15″ screen.  They’ll cost around $45 each and launch in October in Japan.

I (Bob) have mixed feelings about this.  On one hand, I’ve always viewed these “classic” consoles as expensive novelty “toys” that are totally fine for the person wanting to feel like they did when they played Sonic as a kid (and these are often what I recommend people start their retro gaming journey with), but they generally have the accuracy of a Raspberry Pi…so not for the person who’s looking for a solid gaming experience.

It seems this time, Sega’s embracing the novelty aspect of it and not trying to convince someone it’s a serious gaming machine….and I think that’s awesome.  The fact that its price is starting at $45, means we may eventually be able to pick one up for half that.  Also, like with the other “classic” consoles, every time they drop below $50, I feel they have more value for the cost;  Even as a trinket you’d display on a shelf, it’s pretty awesome for classic console fans to have.

Here’s where things get a little weird though:  They will be sold in black, blue, yellow and red…and each will have their own set of four games.

While I’d personally want one for the novelty factor, I’d have liked the ability to play all the games offered.  Even if it was only a “let’s see how this thing works” experience, it’s annoying that you’d have to buy all of them to try each game.

Also, if you preorder all four, Sega will include a free replica of the original “Big Window” magnifying accessory.  This seems like it would be just as annoying now as it was then ;/ 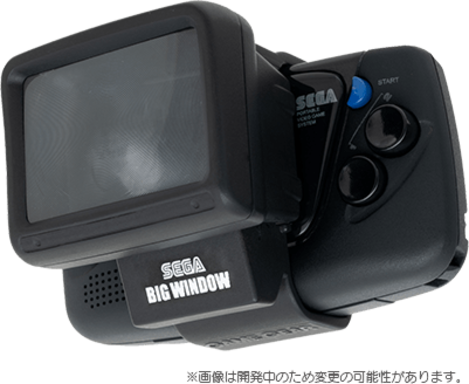 So, overall, I’m not sure if I’d call this one a win.  I’m happy Sega’s embracing the true nature of these devices:  Nostalgia and novelty, but I wish you’d get a tiny bit more (bad pun) for your $45.  I’ll be picking one up if they drop to around $20.