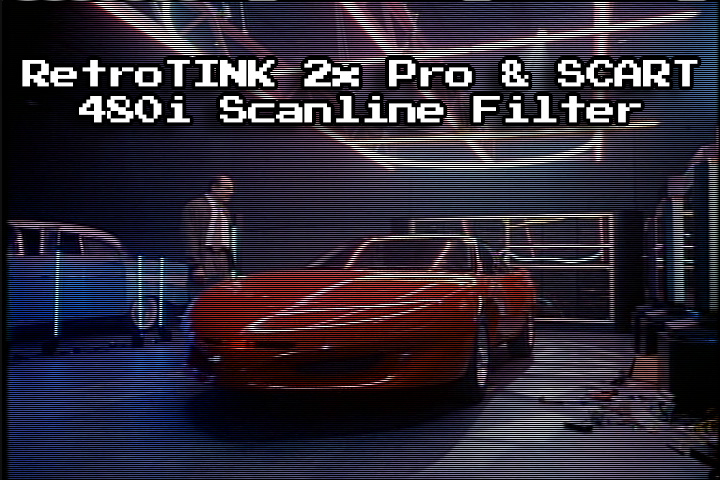 RetroTINK 2x Pro – An updated version of the original 2x with more features, including scanlines!

A few tweaks and calibration options were implemented, but the one new feature that really stood out to me was the 480i scanline mode.  This new mode switches from thick scanlines like you’d see in 240p signals to thinner lines that alternate between odd and even lines between every frame.

To test this new mode, I started out watching / playing via a PS3 in 480i mode through a Sony PVM 20L5.  Then, I switched the PS3 over to the RetroTINK 2x Pro and continued on my 4K OLED.  I played a game, then watched a DVD of an old made-for-TV movie that was most likely “shot for TV”:  480i60, as opposed to film converted to 480i24.  Finally, I watched the last part of the movie through my Oppo UDP-203 scaled to 4K.

The results were really interesting.  Both the TV show and the game looked almost identical to what it looked like on the PVM (open the above pic in 100% mode for an example)!  I’d previously experimented with watching 480i TV shows deinterlaced to 480p, then in their original 480i on a PVM and found that watching in its original resolution gave it the feel of being “sharper”.  In my opinion, the same result happened with the new TINK firmware:  The alternating lines gave the illusion of sharpness on my OLED TV and provided the sense of a true CRT experience.

It was the same with the game as well.  At first when I played the 480i game through the TINK, I thought “this is cool, but I’d probably just play the normal way”…but after trying all other modes of the 2x Pro, I seemed to prefer the new scanline mode best!  There isn’t any more or less “shaking” with these scanlines then there is with standard “bob deinterlacing” and the scanlines really do give a sense of sharpness.

I’m curious how someone who’s never seen a CRT before would feel about this though.  I think my brain was used to seeing TV shows (and some games) look that way for a major chunk of my life, so when it’s mimicked on an OLED I don’t think “jumping lines” I think “CRT”.  I imagine someone that’s only grew up with flat-panels are probably just used to old TV shows looking “low res” on modern TV’s.  One could argue that those 480i shows and movies were originally meant to be viewed on CRT’s in their original resolution, so that’s the look they should be experienced in, but (as always), I think each person should follow their own preference.

Also, not all DVD’s and TV shows are 480i and some look quite good scaled to modern resolutions.  I think in those cases, my eyes would just prefer watching those DVD’s scaled to 4K, however in my opinion, old movies with lots of film grain look much better in 480p on a CRT, or with 480p-style scanlines added.  All of that is a conversation for another day though…

As a note, firmware on both of these newer RetroTINK products is absolutely simple to upgrade:  Plug the device into your PC with a button held down, load up the software, select the TINK, select the file and press start.  About ten seconds later, it’s all done…no external programmer, or clunky software!  If you own one of these devices, it’s definitely worth it to take the few moments to upgrade.