I was very recently was told about a new album designed specifically for the Sega Genesis (Mega Drive) that released on March 22nd of this year. It’s not the first time a cartridge containing music has released for the platform, but it’s the first and only self-described techno album release on a cart for the platform. The Artist is Remute, the album? It’s titled Technoptimistic.

I’ve often dreamed of a pass-through cart that would let you plug in a game such as Streets of Rage, and enjoy the sounds track as if it was a standalone album. I’m a huge fan of video game music, especially that made on older hardware like the Mega Drive’s YM2612. There’s something awe-inspiring about the analog process that captures me in a unique way. It’s a sound and style not easily replicated while the process of creating music for these platforms is uniquely specific to that era. That’s not to say Technoptimistic is this concept realized, but it makes me think of this long-standing dream of mine and how I’ve often viewed bad games as carts containing a great single, or in some cases, great albums rather than games.

I have a passion for new projects on old hardware and wanted to pick this up for curiosity sake. Then I discovered Kabuto was involved and I knew this was going to be something special. I originally spoke with Kabuto last year when making my documentary Why We Create which is a look at people who develop software for abandoned platforms. He’s part of the Titan Demo Team responsible for the mind-blowing Overdrive 1 and 2. While he handled the programming here, Exocet who’s another Demo scene giant created the graphics. Together, they created the demo scene style music video that’s included, more on that in a moment though. I don’t want to get too technical as the team behind the game put together a sixteen-page document discussing everything you could ever want to know. It’s a dose of shocking openness that further reinforces why they deserve our support. 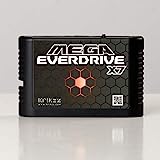 (71)
SUPPORTS 99% of games from SEGA library INSTANT LOADING (1-2 sec). MASTER SYSTEM FM CORE CHEATS FEATURES. Game Genie and Play-Action Replay format supported. GENESIS, MEGADRIVE, SEGA MASTER SYSTEM, and 32X games supported.
(as of January 26, 2023 - More infoProduct prices and availability are accurate as of the date/time indicated and are subject to change. Any price and availability information displayed on [relevant Amazon Site(s), as applicable] at the time of purchase will apply to the purchase of this product.) 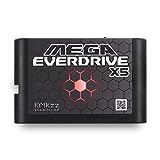 (56)
$76.00
SUPPORTS 99% of games from SEGA library. FAST LOADING REGULAR GAME battery back-up saves. Genesis, Mega-drive, Sega Master System, and 32X games supported. CHEATS FEATURE. Game Genie and Play-Action Replay format supported.
(as of January 26, 2023 - More infoProduct prices and availability are accurate as of the date/time indicated and are subject to change. Any price and availability information displayed on [relevant Amazon Site(s), as applicable] at the time of purchase will apply to the purchase of this product.)
I put my order in costing €37.33 EUR or about $45 USD shipped from Germany to my home in Oregon and it arrived two weeks later. The hardware for those concerned about poorly designed boards that can damage hardware………… breathe out a sigh of relief. This board was designed and supplied by Krikzz of Everdrive fame. This leaves zero doubt in my mind that there’s nothing to worry about here. While we are on the subject, I want to point out this is a legit 32meg cart keeping it well in line with what was being produced when the system was still supported by Sega.
The album contains 14 songs and for those who listened to late night mixes on Radio One or had albums by Ministry of Sounds, this without a doubt harkens back to those times. A time of incredibly mixed progressive dance music which told a story from start to end capturing the soul of the environment that inspired its creation. This is something the YM2612 was made for and Remute comes across as a genius in how he makes the chip sing. I’ve already mentioned Streets of Rage, and that’s because this is the album a Cyber Punk inspired beat-em-up deserves. I’m in love with it from top to bottom, with some songs exceed my expectations such as “A Warm Feeling of Total Immersion”. In fact, I’ve had the complete album on loop most the afternoon as I’ve gone about editing and writing non-related scrips and imagine it will remain close at hand for the foreseeable future. Beyond the 14 songs, there are QR codes for two bonus tracks, both very good though they are unfortunately digital only.
Finally, there is the Red Eyes Music Video. It’s a mix of FMV and 3D sequences that combine for something you would only expect to see as a product of the most dedicated demo team. I guess that’s fitting as the team responsible for it is part of the Demo community having inspired countless numbers of projects their work preceded.
I’ve enjoyed Technoptimistic so much I felt inspired to write about what was accomplished here. I didn’t pick this up with intentions of covering it but feel what this team of three people pulled together is a fantastic experience that should be recognized, praised, and experienced. I feel inspired to talk about it and I hope you feel inspired to see if it’s right for you. If you’ve read to the end and are thinking this sounds good I can guarantee you won’t regress picking this up.
-Jenovi
Retro Impressions
Buy or check out the project here.
https://remute.bandcamp.com/album/technoptimistic
Links to the development documents.
https://docs.google.com/document/d/17pX_PS5uXSWoaS71JurC-DSKIV8ZAzlaP4o1jXbJ9CA/edit#heading=h.1ypbrs9lw20f