Coury examined all of the cart’s features and took an in depth look at its Sega CD capabilities, comparing it to original hardware in terms of accuracy, especially in both the sound and load times departments.

The “Mega Drive +” option, which was only exploited by WaterMelon in their 2010’s title Pier Solar, is highlighted here alongside an impressive release of Streets of Rage 2 with an enhanced soundtrack.

Terraonion on the other hand, released a firmware update featuring the exciting new option of transferring save files from other multi-carts onto the Mega Sd itself (which was also demonstrated in MLIG’s video) as well as a ton of other bug fixes. Check that impressive list out: 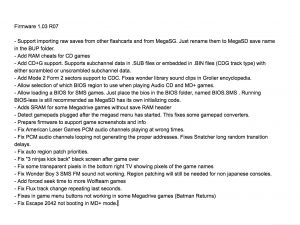 The Firmware is downloadable through Terraonion‘s official website. (A user name/password registration and the cart’s serial number are required to access the downloadable archive).

The Mega Sd is shaping up to be one of, if not the best multi-cart/ODE ever made:  https://bit.ly/terraonionmegasd