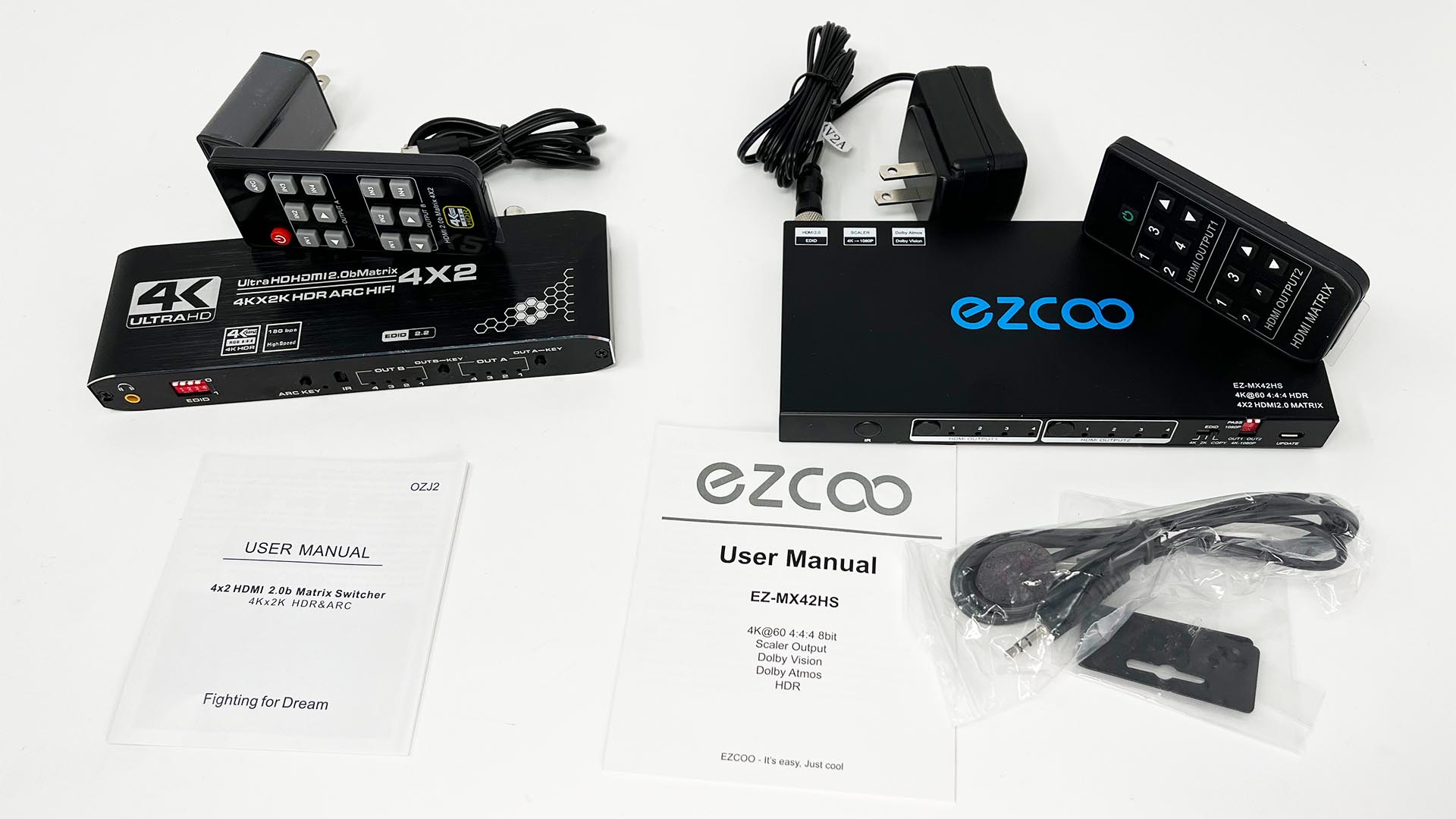 Over the past few months, I’ve been testing two different HDMI matrix switches – Completely lag-free devices with four inputs that allow you to individually assign each to one of two outputs.  Both switches perform about the same, with two major feature differences:  One allows for digital and analog audio extraction, while the other gives you the option to downscale a 4K signal to 1080p – Something really handy if you’re connecting one output to your TV and the other to an older (but still awesome) AV receiver.  You can also do this with a splitter, however some people might prefer a switch for the same task.  There’s a bunch of little differences though, so check out the full review below the sale links:

Before I continue, I need to warn everyone about a common problem with these “generic” devices:  Consistency.  You’ll often find multiple brands using the same case, but with different branding and different electronics.  It’s also common for a company to switch the chips used inside (especially during a global part shortage!), resulting in something you buy today not performing the same as something that looks identical that you bought a few months ago.  So, just buy from a store (like the links above!) that allow you to return them if they don’t perform the same as they did for me.  Okay, with that out of the way, onto the review – Let’s start with the differences between the two, then the analysis below of both:

This switch is absolutely ideal for anyone who needs a matrix switch that also extracts audio!  It’s got extraction on output 1 for both SPDIF and Coax and even supports Audio Return Channel (ARC) – More on that below.

The digital audio extraction is basically perfect and the 2.0 channel digital to analog converter (DAC) is absolutely passable, when taken in-context;  If you’re looking at this as “Hey, this $50 HDMI matrix switch has a DAC that doesn’t suck!”, then you’ll love it.  That said, if you’re comparing it to a higher-end DAC, you’ll be disappointed and will definitely want to use a different DAC.  That’s just the analog output though – Once again, the digital audio outputs are great!

Unless I’m missing something, the ARC capability would be a very specific use case.  I’m guessing when you enable ARC with the button (on the remote or in front), the TV connected to Output A will now control the volume of the audio outputs.  So, if you have something like a set of powered speakers, you can set them to 50% volume and let this device dictate the volume level.  Kinda niche, but cool it’s there. I can’t think of too many other setups this would fit.

The EDID options are pretty plentiful on this switch as well.  Also, they’re listed right on the bottom, so you don’t have to reference a manual or anything!  Overall, if you’re looking for an HDMI 2.0b, 4×2 matrix switch with audio options, this thing’s a winner! 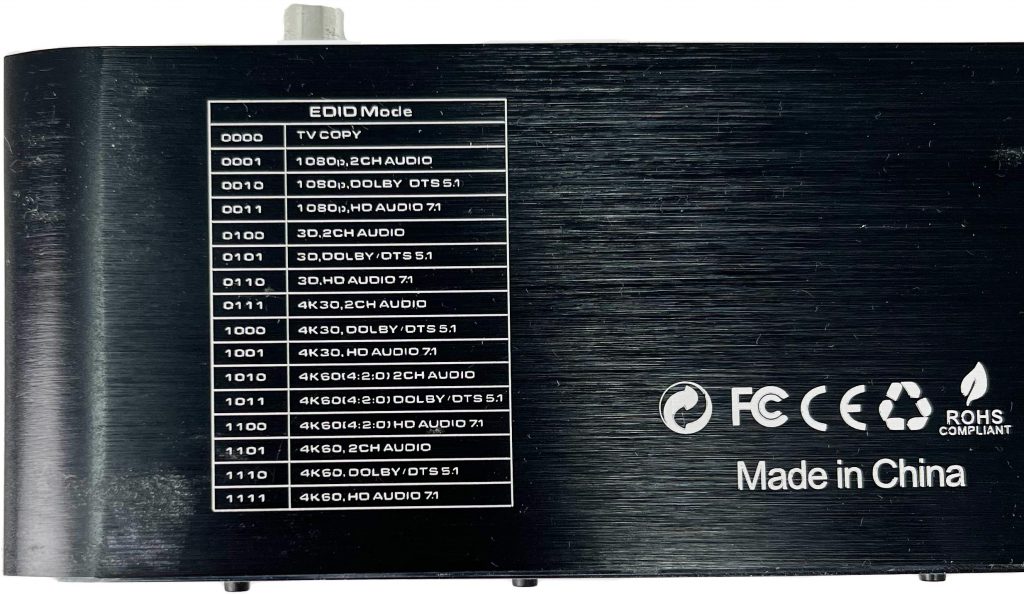 The EZCoo switch focuses on downscaling as it’s main feature:  You can set either (or both) outputs to downscale 4K to 1080p via the switches on the front right.  This is perfect for people who want to stream in 1080p, while playing in 4K60.  It’s also a really handy tool for people with AVR’s that don’t support 4K60:  Simply route one output to your TV and the other to the AVR with downscaling turned on!

The EZcoo also has more control options:  It’s bundled with an IR extender, so you can mount the switch out of site, but still use the remote to switch inputs.  It’s also got RS232 receive controls, so you should be able to control this switch with any serial-based control equipment.  It also supports updating via a USB port in front, which is only used for updates and configuration- power to the unit is in back.  The power adapter screws into the back as well, making this a sturdy setup for anyone wiring it into a video rack.  I normally prefer using USB power, since I can power the switch from basically anything, but if I was wiring a professional installation, I’d prefer this: 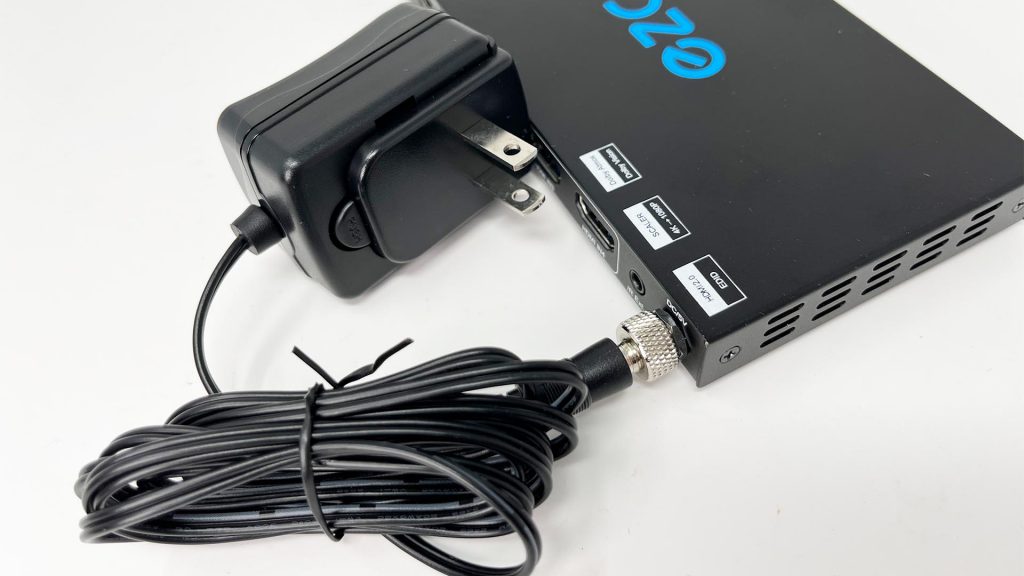 While there’s not as many EDID options as the Newcare, you have all the ones most people using this switch would need:  Force 4K60 4:4:4, force 1080p60, copy the EDID from HDMI out 1.  I honestly don’t know what the HDCP note is all about – I didn’t run into that at all.

So, for $80, this switch is definitely for people who specifically need either more control options, downscaling, or both!

One major issue for retro gamers, is HDMI compatibility with the weird signals we use;  All modern HDMI signals follow very strict standards, while analog to digital conversion of any kind often results in off-timing signals that sometimes freak out HDMI devices.  I’m happy to report that both of these switches seemed to work fine with a stock (no de-jitter installed) SNES in 1080p5x mode.  While I didn’t clock a ton of hours playing SNES, I didn’t get any dropouts when I was using it.

An issue all gamers face is the ability to capture and stream their HDMI devices.  Some consoles like the PS3 won’t let you capture via HDMI at all without an external device.  Others like the Apple TV will have mixed results.  Luckily, both of these switches allowed for full capture compatibility of both devices!

I ran a few color compression tests and the output on both switches are perfect:  Unless you specifically use the switches settings to change the image, it’s a 1:1 signal for both audio and video (with the exception of the Newcare’s DAC of course).  Here’s proof of all three – If there was any change, the text would be blurry and the corners would all have misaligned right angles.  In order to verify, you MUST view this in 100% zoom, otherwise you’re seeing the web browser’s scaling.  Also, from left to right, it’s Direct, EZCoo, Newcare…but it doesn’t really matter, cause they’re all the same:

If you’d like a detailed look at how to test the audio portion of an HDMI device, check out the stream below.  It’s not really an exciting stream, but it shows my work, teaches you how to do it yourself…and shows how much effort goes into these “short” reviews ;p  Also, the stream below that is setting up for this and shows loopback equipment testing, in case you’d like to test your won equipment with MDFourier as well!