TrekkiesUnite118’s English translation of the Saturn version of Grandia is moving along at a good clip with just a few outstanding items to be done until it’s considered complete.

The most recent official status update from the forum:

Most of the outstanding items seem like just a matter of time and patience but the FMV is an exception. The game doesn’t appear to use standard codecs for it’s FMVs so figuring out how to decode them, insert subtitles and re-encode them could be the proverbial “long pole in the tent”.  On the off chance that you know something about decoding and encoding CRI’s pre-MPEG Softdec video used on the Saturn release of Grandia, maybe pop into the forum and see if you can lend a hand.  TrekkiesUnite118 has not let much slow him down and I have confidence he’ll get this figured out but fan projects like this are often at the whim of the concerns of real life so it’s difficult to do anything other than speculate about the time frame for release. It certainly feels like it won’t be much longer.

So why write another article about this project before it’s finished?  Because David Lee who goes by the name SaturnDave on Facebook reached out to me about a related project he’s working on and if my excitement was at 10-out-of-10 before, it’s more like 12-out-of-10 now. 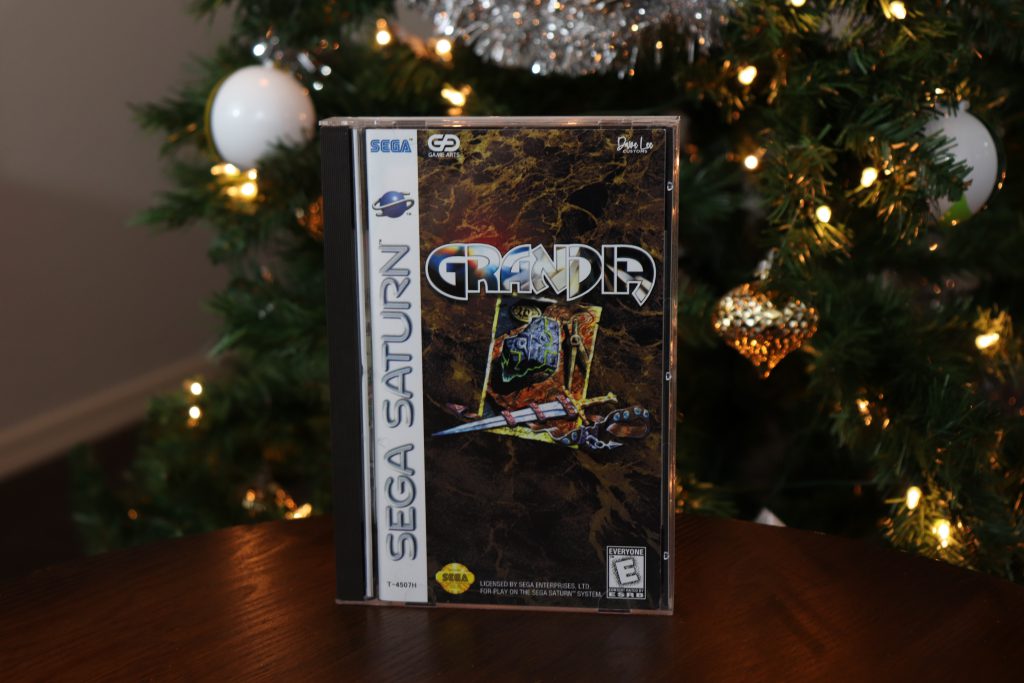 SaturnDave produces very high quality longbox art and manuals for Saturn Fan translations or for games that just never had a longbox release (i.e. Christmas Nights).  His treatment of Grandia not only includes a full color 40-page manual, but even a bonus map and poster.  Unlike the map that came as a pre-order bonus for the Japanese release which Dave describes as a “non-functional work of art”, the map he’s providing actually has locations marked on it like a real map.

Looking at his work reminds me of the indescribable yearning I had, hoping vainly that Sega would localize Grandia as the Saturn’s RPG magnum opus instead of Shining Force III Scenario 1 as a standalone game.  It’s as if SaturnDave has reached into my imagination of 20+ years ago and plucked out something that I desperately wanted and made it real while treating it with more care and respect than Sega themselves probably would have.

The process of making retail artifacts for fan translations is not really new.  I even tried my own hand at it once upon a time.  I still see the box I designed for Tales of Phantasia on SNES being printed and sold occasionally.  Creating these artifacts and doing them right can be a grueling labor of love.  Tracking down raw art assets in high enough resolution, trying to get high quality scans to pull logos, resisting the temptation to use modern art instead of the original (i.e. putting ESRB logos on stuff released before the ESRB, using a contemporary company logo instead of the one that existed at the time, using art drawn for a remaster instead of the art drawn for the original), trying to match fonts for printing, and then typesetting arranging, measuring and comparing with variations on existing box art can all be a tedious process, and that’s just the lead up.  Once you have the box art designed then you have to find the right printing process to match the look and feel.  If you get the color space wrong, or any number of small details the print will turn out terrible.  It’s very easy to give up on the pursuit of perfection halfway and produce a mediocre product that’s “good enough” with mis-matched fonts, obvious scaling artifacts from low resolution sources, misaligned pages, items or artifacts that don’t match the time period etc.., and I see that in a lot of the fabricated boxes and cover art being sold these days.  Often it’s the difference between genuine enthusiasm and love for the source material and just trying to make a quick buck off of the nostalgia of others.  SaturnDave is clearly doing this out of respect and passion and it shows through in the quality.  It’s easy to look at the finished product and think “meh, that’s neat” without realizing just how much passion goes into the work.  That’s why I have such tremendous respect for anyone who takes the time to do it right. 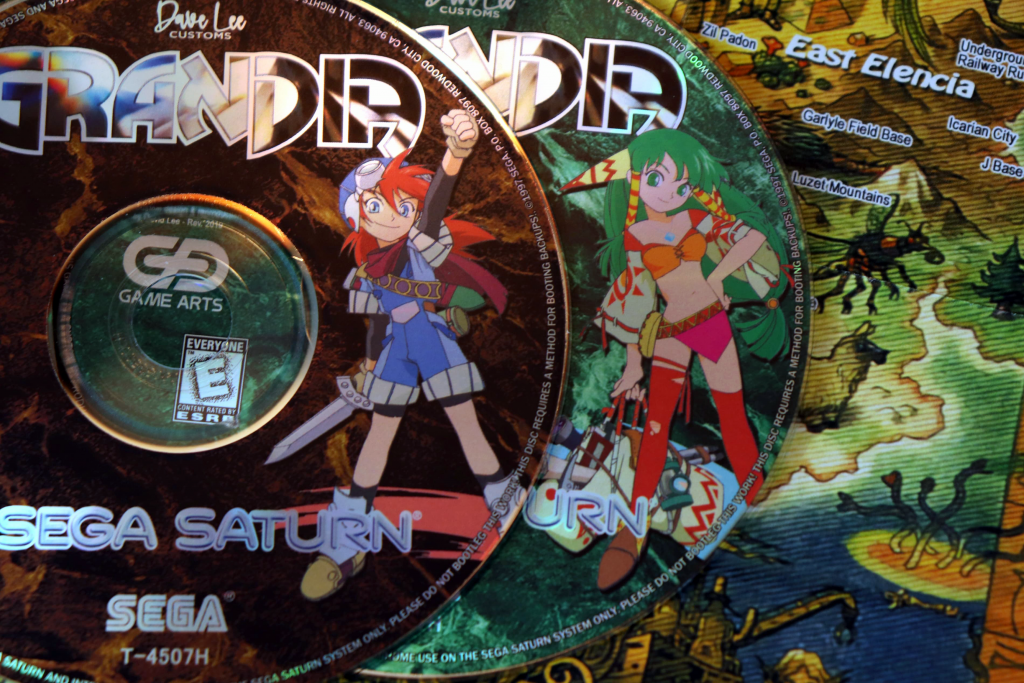 We’ll have to wait for the translation to be declared finished by TrekkiesUnite118 before SaturnDave is willing to sell these.  After all, there’s no guarantee that the project will ever be finished (not that I want to contemplate a future where it isn’t.)  However long that wait was before, it feels twice as long now because of the added anticipation of eventually holding such a complete product in my hands.  As I understand it when SaturnDave introduces art and manuals for a new game, he generally makes 10 to start with then drops a surprise announcement on Facebook and the first 10 people to reply get the chance to buy one.  He tells me that several of his regular customers have developed the ability to predict things so he’s thinking about changing things up for Grandia, so don’t count on it working that way with this one.

SaturnDave only sells the manuals and inserts – you’ll have to source the longbox jewel cases yourself, but fortunately that’s not the problem it once was.  The reproduction long-box jewel cases (second version) being sold on Amazon are very good quality.  He’s also planning on providing pre-printed CD-Rs with this one that buyers will then be responsible for writing the patched game to themselves.  Just a reminder in case you’re not familiar with the Saturn copy protection, you’ll need either a hard modded Saturn, or a Pseudo Saturn cartridge (custom firmware written to an Action Replay) to play these discs.

GRANDIA Long Box – Finally Finished!This has been a dream in the making for me, and I can't thank TrekkiesUnite118 enough for bringing us an English patch for this game!After weeks of working on this epic project, I'm finally bringing it to a close…40 full color pages, 2 discs and a fold out map/poster. Whew! I'm tired…This will NOT go into production until the FINAL English patches have been released, but I will eventually do a production run, though it may be limited to begin with, at my current rate of production output.

Posted by SaturnDave on Friday, September 13, 2019

(181)
$59.99
LONG BOX REPLACEMENT CASES FOR SEGA CD / SEGA SATURN / PS1 *LOCKING DISK TRAY* *CLOSES TIGHTLY* *DOUBLE BUBBLE WRAPPED*
(as of January 30, 2023 - More infoProduct prices and availability are accurate as of the date/time indicated and are subject to change. Any price and availability information displayed on [relevant Amazon Site(s), as applicable] at the time of purchase will apply to the purchase of this product.) 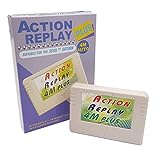 Action Replay 4M Plus - Ultimate enhancement for your Saturn console

(1051)
$39.99 $35.99
4M memory card 1/4 MB ram expansion pack action replay cheat codes play imports
(as of January 30, 2023 - More infoProduct prices and availability are accurate as of the date/time indicated and are subject to change. Any price and availability information displayed on [relevant Amazon Site(s), as applicable] at the time of purchase will apply to the purchase of this product.)
Liked it? Take a second to support samson7point1 on Patreon!