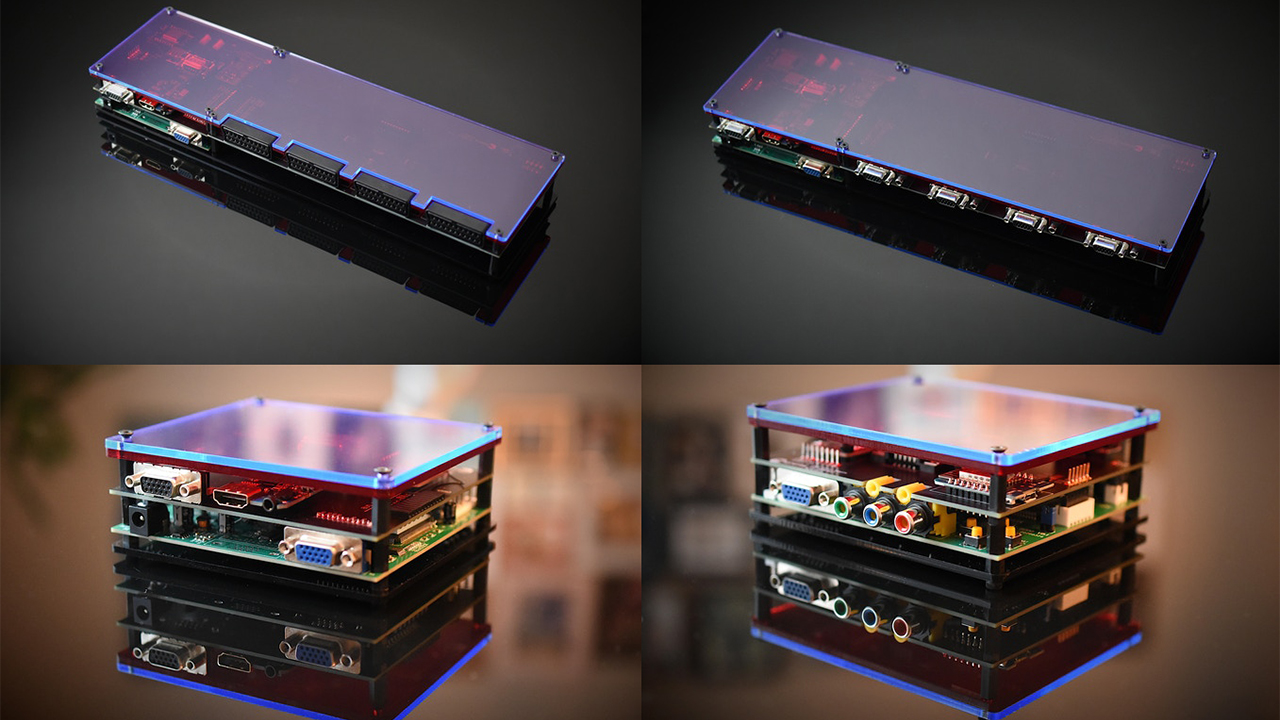 Chipnetics Computing has just launched a kickstarter for multiple versions of a GBS-Control solution, one of which includes an auto-switch.  The products look cool, but I have quite a few reservations about it.  Let’s take a look…

The first version of the product they’re selling is something called the “Slipgate”, which is $135 and appears to be an updated version of their completed kit currently available on Tindie.  This kit will ship as a turn-key solution and has a custom board with both an HDMI output and ClockGen installed.

There’s also an option for an auto-switching “Slipgate + Quad Damage” version, which is selling for $245 and can be purchased with a choice of either four SCART inputs, or four VGA inputs.  Both products are due to ship in June of this year, a realistic timeframe.

While the products looks cool, I need to stress that according to their kickstarter page, they’re all unfinished.  That doesn’t necessarily mean anything negative, but people should definitely know they’re pre-paying for a product that doesn’t fully exist yet and hasn’t been tested by outside sources:

“The design in the pictures is a fully functional design, but not the final design! All pledgers will be carefully listened to for their valuable input on design and layout considerations.“

Now some opinions (Bob’s) and I’ll start with something positive:  I love to see open-source projects embraced this way.  Jeff Paranich, the person who runs Chipnetics Computing (formerly 8BitGasm) has evolved the project with their own ideas, all while crediting the original developer as is proper with open source projects like this.  Much like the GBS-C AIO, I think the Slipgate version could be an excellent choice for people who are looking for a completed, turn-key GBS-C solution, however as with any new product, 3rd party reviews are definitely needed to verify performance and safety issues.

I gotta be honest though – I don’t “get” the integrated switch version.  First and foremost, designing a switch for use with retro-gaming is really, really hard.  Heck, even a manual pushbutton switch requires some meticulous routing to make sure interference isn’t spread from one console to another.  Even if it’s a perfect design, I’m not really sure the use case of something like this:  Is the product designed for someone with four consoles they’d like to connect to their flat-panel TV and control with a web browser page?  Maybe there absolutely is a need for something like this and I’m just not seeing it?  UPDATE:  Very shortly after this post went live, it was brought to my attention that the Kickstarter campaign talks about including a forked version of the software that allows for custom profiles based on each input.  If that’s possible, it’s an excellent feature that allows you to connect four devices that require much different settings, but you’ll only need to configure each once.

I’m also completely turned off by some of the marketing in this kickstarter…at least in the version I read today.  Statements like “Lagless Video Upscaling” and “pixel perfect video scaling” aren’t quite true;  While the lag is pretty much non-existent when scaling progressive scan sources and the lowest I’ve seen for motion adaptive interlaced scaling, it’s not zero.  And while the scaling is absolutely awesome, it’s not “pixel-perfect” as I showed in both my review and follow-up tests.  Also, there’s some flat-out mistakes in the campaign as well, including a statement that you can use an unmodified PAL N64 with an RGB SCART cable.

So, I recommend taking a look at this campaign and deciding for yourself if it’s something that fits your needs.  If it’s all done right and there are no safety concerns, or performance issues, both will be a great choice.  As with all Kickstarters for unfinished products, you take a gamble when you support, but Chipnetics is a company that’s had proven products in the past, so that should be taken into consideration as well.

If you’re interested in making your own, or just want more info on GBS Control, please check out my detailed video here: