FPGA developer Robert Peip aka FPGAzumSpass has just released a MiSTer core for his FPGA implementation of the Game Boy Advance.  HDMI output is currently supported with analog (RGB/Component/VGA) in the works.

At the moment, the core can be downloaded simply by running the MiSTer update script (either “update” or “update_console” depending on your version), then creating a ‘GBA’ folder for your roms.  As an FYI, I needed to add the following to the bottom of my MiSTer.ini file to get it to work correctly:

The core download includes an open source BIOS.  If you run into (or report) any bugs or compatibility issues, it’s recommended that you re-test with the original BIOS for now, until the open source one is tweaked further.  Simply download GBA.BIOS, rename it boot.rom and save it in the GBA games folder you created.  That’s it, nothing else; The core will see that file and automatically use it instead of the open source BIOS.

Also, a 32MB (megaBYTE) RAM module would allow you to play most of the GBA’s library, but 64MB or 128MB may be required for a few of the larger games.  I believe all US games requiring the larger RAM module are listed in the screenshot below (thanks to Rysha for all the screenshots in this post!):

The goal of this core is to have a zero-lag FPGA GBA solution that’s instruction-cycle accurate.  What that means in laymans terms is this core is designed to be as accurate to the performance of the GBA’s gameplay as possible, as opposed to chip-level accurate.  There’s a few reasons for this and while someday GBA chips may get de-capped and analyzed, the bottom line is we now have a zero-lag FPGA solution for playing GBA roms via HDMI output with no screen tearing or stutter.  Robert used the mGBA Test Suite to prove that even upon it’s initial release, it’s extremely accurate.

This core also allows for gamma settings, which has always been important when playing GBA on anything other than it’s original screen (check out my GBAz video for more explanation on gamma): 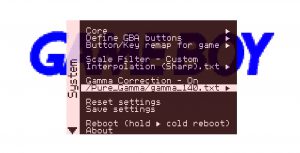 You’ll need to run the full update script to get the gamma correction options…and if for some reason you don’t see the option, you probably have an outdated MiSTer installation (like I did).  I’ll have a video soon, showing how to get the most up-to-date MiSTer features.

Once again, the core was just ported to MiSTer this morning and while it seems to be pretty stable, things will get tweaked and cleaned up as other members of the MiSTer team start to contribute.  Please don’t forget that the entire MiSTer team contributes their time out of the love for classic hardware and we owe them all a thank you!

(696)
$7.99
Expands into 4 USB Ports for Raspberry Pi Zero v1.3 (with camera connector) and W (with Bluetooth and Wifii), Orange Pi, ODROID, Banana Pi Compatible with Samsung Galaxy S2, Samsung Galaxy Note, Samsung Galaxy S3/S4, Galaxy Tab3 8.0, Sony Xperla NX-0... read more
(as of January 31, 2023 - More infoProduct prices and availability are accurate as of the date/time indicated and are subject to change. Any price and availability information displayed on [relevant Amazon Site(s), as applicable] at the time of purchase will apply to the purchase of this product.)
Liked it? Take a second to support Bob on Patreon!